In This Place: The lasting impact of Nova Scotia’s first exhibition of Black artists’ work 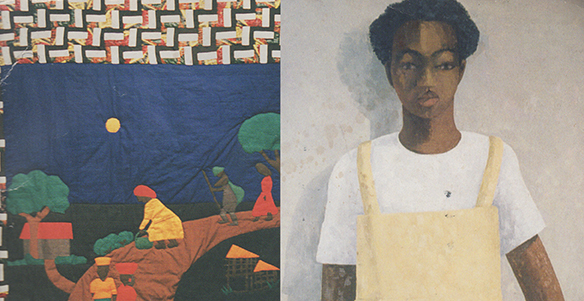 Detail of exhibition catalogue cover for “In This Place: Black Art in Nova Scotia”

The exhibition We are the Griots—curated by Jade Peek—may have opened to the biggest snowstorm all season this past February at the Anna Leonowens Gallery, but it still saw a lot of press coverage. Jade was on the cover of The Coast weekly paper. The article billed We are the Griots as the first exhibition of “solely Black Nova Scotian artists in Halifax since the 1990s.” I was stunned — Had there really not been another exhibition dedicated to Black Nova Scotian art since the 90’s?

So I went digging, looking up the late 90’s in the Visual Arts Nova Scotia archives, and low and behold, it was on the cover of the Spring 1998 issue, Volume 20 Number 1: In this Place: Black Art in Nova Scotia. The cover image is bold, graphic and visually striking. It features a painting of three figures in simple, but expressive white lines on a black thickly textured background. Inside, there’s an article by curator/artist Pamela Edmonds, stressing the historical importance of the exhibition. “In this Place: Black Art in Nova Scotia represents the first-ever attempt to represent and contextualize the tradition of Black Nova Scotian art making in the province,” she writes. In my research since, I have learned that David Woods—who co-curated the show with Harold Pearse—represents just one individual out of just a handful of Black curators who have been working in Halifax to this day, continuing the push for the self representation of Black Nova Scotians in visual art.

“A great void existed for me as an artist in Nova Scotia … of knowing that most people assume that no art of significance had been created by the Black community.” —David Woods 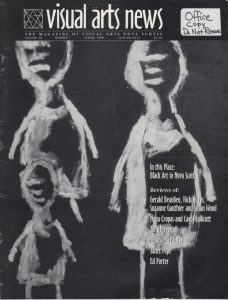 Edmonds describes the exhibition as a “groundbreaking effort to provide a comprehensive overview of a sector of the art making community rarely shown or acknowledged.” She points to a history of exclusion and segregation in Nova Scotia. In the article she interviews the co-curators David Woods, a local artist and community organizer, and Dr. Harold Pearse, the academic dean at NSCAD, about their inspiration for the exhibit, their relationship and the project. As Woods explains, the title of the exhibition originates from his poem Abode, which references the experience of the early Black settlers and the land the government allotted them in Nova Scotia—described as
“barren, rocky soil or swampland.” For Pearse, MSVU Art Gallery’s 1983 show The Past in focus: a community album before 1918 : photographs from the Notman Studio served as his inspiration for the exhibition, as well as providing him with his first exposure to the depth of art created by Nova Scotia’s Black communities.

Pearse explains that even though many Black kids from the community spaces are very interested in visual art, their enrollment at NSCAD has always been very low. In the article, Pearse points to Woods, a self taught multi-disciplinary artist and an active community member, as the perfect link to try to bridge the two worlds of the Black art communities and the institutionalized White art world. 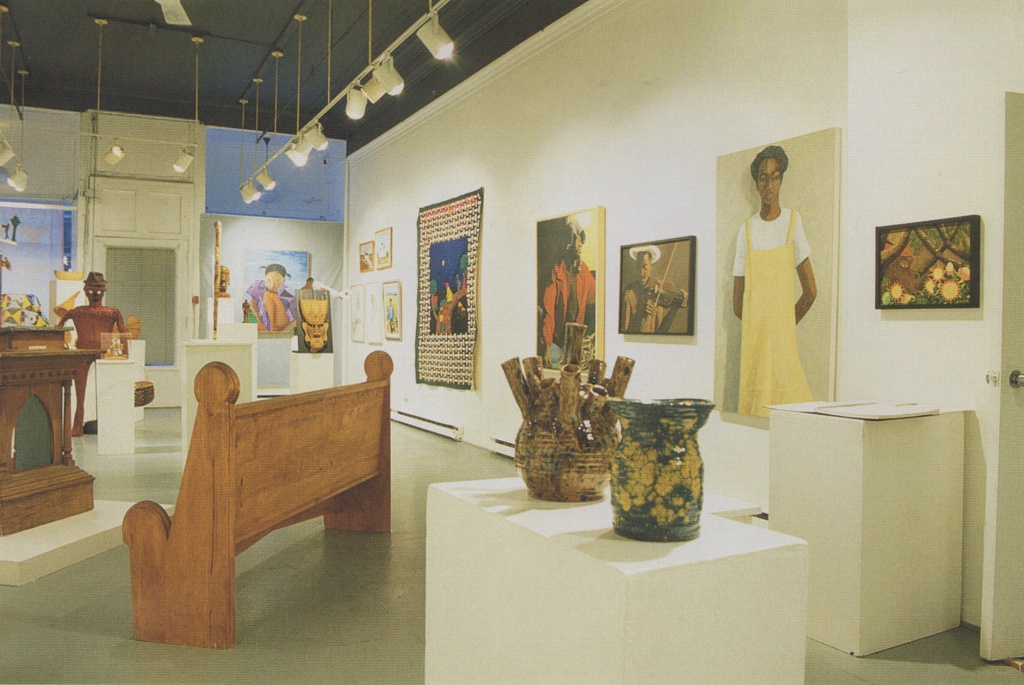 Installation view from the catalogue of “In This Place: Black Art in Nova Scotia”

Pearse and Woods discuss how surprised they all were by the amount of Black Nova Scotian artists that they uncovered in their interview with Edmonds. When they began planning their exhibition, they were thinking about featuring only a few artists—but that all changed by the end of Wood’s research, which  consisted of his unorthodox, but essential curatorial method of driving to several rural Black communities around Nova Scotia and literally knocking on doors and asking questions. Woods brought back over 200 images of work, which they narrowed down to 100 pieces to show by 45 artists. As the exhibition grew, the curatorial team realized it deserved more than just a two-week show at the gallery. They decided to take the exhibition beyond Halifax, touring to three other galleries in the province.

In Halifax they planned several special events, connecting Black artists to the larger art community. These events included a panel discussion and performance event with guests including: Jim Shirley, one of the first Black artists to exhibit in Nova Scotia; Audrey Dear Hesson, the first Black graduate of NSCAD in 1951; local photographer and filmmaker Silvia Hamilton; and painter Crystal Clements. They also screened a film about celebrated African American artist Jean-Michel Basquiat, gave youth workshops and tours of NSCAD, and provided a funding information session with the Canada Council and the Nova Scotia Arts Council (all made possible by $40 000 of grants obtained from the Nova Scotia Arts Council, Department of Canadian Heritage and the Canada Council for the Arts by Black Artist Network Nova Scotia (BANNS) and Peter Dykhuis, who was the director of the Anna Leonowens Gallery at the time). After the tour concluded, they were able to produce a full size catalogue from the NSCAD Press. 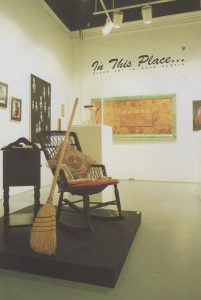 Installation view from the catalogue of “In This Place: Black Art In Nova Scotia”

Pearse’s curatorial statement in the catalogue includes well-researched tidbits of information about the experience of Black artists in Halifax, such as the fact that Hesson received the Lieutenant-Governor’s prize and “taught for the school’s Saturday morning children’s art classes, at the YMCA’s boys club and to an adult education group in Africville.” But he points out that due to a shortage of employment opportunities, Hessen could never obtain steady employment in the public school system. Pearse continues with a sparse, but steady history of Black exhibitions and artists in Halifax in the 80’s and 90’s, a time when NSCAD grads and Black artists like Donna James were showing black and white photographs (Eight Men in a Big House, 1989), Buseje Baily was making videos about the female black body (Body Politic, 1992) and Derril Robinson showed his pottery in a joint exhibition with Andrea Arbour (Facades, 1995). 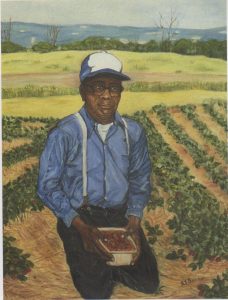 When I spoke with Woods, I asked him what he thought, almost twenty years later, about the impact that In this Place had made. He talked a lot about an increase of visibility. “All of the establishment galleries offered shows to the NSCAD people for the next four or five years,” he pointed out. Woods himself has continued curating and one of his longest touring exhibitions has been The Secret Codes, which started touring 2012, where he featured narrative and pictorial quilts exhibited quilts made by African Nova Scotian quilt makers. These quilts are the result of a collaboration of Woods’ drawings and the talent of quilt makers like Myla Borden of the Vale Quilters, a group from New Glasgow, who have been working together since In this Place showed the pictorial quilt Passages. As well,  he recalled MSVU Art Gallery invited Shirley back to the Mount to have a retrospective called Jim Shirley Returns: The Art of James R. Shirley (2000). Woods himself also worked as an Associate Curator at the Art Gallery of Nova Scotia from 2006-2007, where he helped to develop the AGNS’ African Canadian Art Initiative. During his short time there he helped to bring Mary Bendolph: Gees Bend Quilts and Beyond to the gallery in 2007 and worked on acquiring work by early Black Atlantic painter Edward Mitchel Banister. He confidently states after all of this work things can “no longer go back to the status quo.”

I’d like to believe that the status quo has changed in the 19 years since In this Place opened. Researching this historically seminal exhibition in Halifax’s art history has opened my eyes to the work and struggle of Black visual artists and curators in the very White dominated art world of Halifax. A staggering number of galleries in Canada still almost exclusively give solo shows to white artists (according to statistics from a 2015 Canadian Art study). We are the Griots represents one in just a small fraction of Black artists and curators living and working in our province. In this Place blew the door open in terms of self-representation for Black artists in Nova Scotia, but that door is still there and it’s primed to be blown away completely.

In the next two parts of this series, I will be looking closer at the history and context of Black exhibitions in Halifax previous to In this Place, and report the prolific work of the author of the VANS article that started me on this journey, writer, artists, art administrator and curator, Pamela Edmonds in the years following In this Place.

More: Looking Back: Our version of “women in the arts” in the 70s

More: Get to know our research intern