Looking back: Our version of “women in the arts” in the 70’s 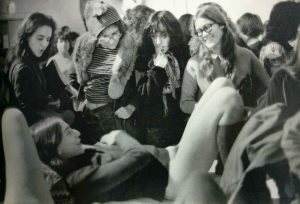 Photo from “Growing Up Female,” a personal photo journal by Abigail Heyman published in 1974, and in the NSCAD library ever since.

I decided it’s best to start my exploration of the archive at the very first issue of Visual Arts Nova Scotia from 1976. The very first issue is filled with opinions, opportunities and resources — like tips on taking slides, exhibition listings, reviews and some advice on how to get grants from Canada Council for the arts. It’s clear to me that there was lots of energy being put into the new publication, as a way to support the budding visual arts scene in Nova Scotia and Atlantic Canada. This strong foundation of support clearly continues 40 years later. But in the second issue, I came across a very interesting article entitled “Women in the Arts.” It is an annotated bibliographic record of 52 publications that catalog women in the arts, in fields including film, photography, writing, painting and sculpture, compiled by Chery Homes from Montreal’s PowerHouse Gallery, that offers a great historical reference and a poignant reflection of society at the time by a young Canadian feminist of settler heritage.

The list mainly contains books about historical and contemporary (at the time) female artists from America, Canada, Europe, Egypt and Colombia. It is also peppered with a mix of well known feminist authors like Simone de Beauvoir (The Second Sex , 1952) and lesser known surrealist fiction/nonfiction works such as Down Below by Leonora Carrington (1972). There are some hidden gem artists’ books, such as the photo journal Growing Up Female by Abigail Heyman (1974), a pamphlet from the West Coast Women’s artist Conference at the Feminist Art Program at California Institute of the Arts in Valencia, California (1972), and some great 1970’s feminist titles such as Rooms with No View (Media Association, no date), Popcorn Venus (Rosen, 1973), Not in God’s Image (O’Failain, Martines, 1970) and Through the Flower: My Struggle as a Woman Artist (Chicago,1975). Also included is a memoir of Elizabeth Vigér-Lebrun from 1903 where Homes writes “The Queen picked up her paints when Elizabeth was too far in pregnancy to stoop. These memoirs include many clever anecdotes of the guerrilla tactics to feminine feminists and artists.” I’m not exactly sure what this means, but it is alluring to find out what guerrilla tactics the portrait painter of Marie Antoinette knew for “feminine feminists and artists.” 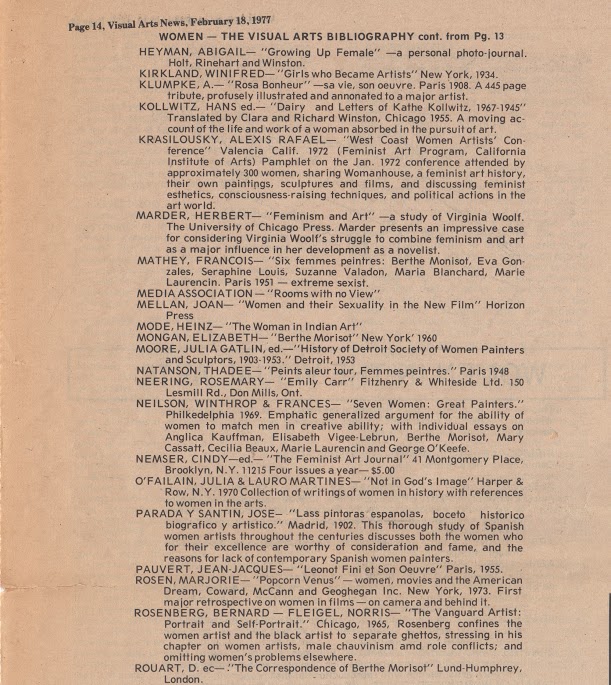 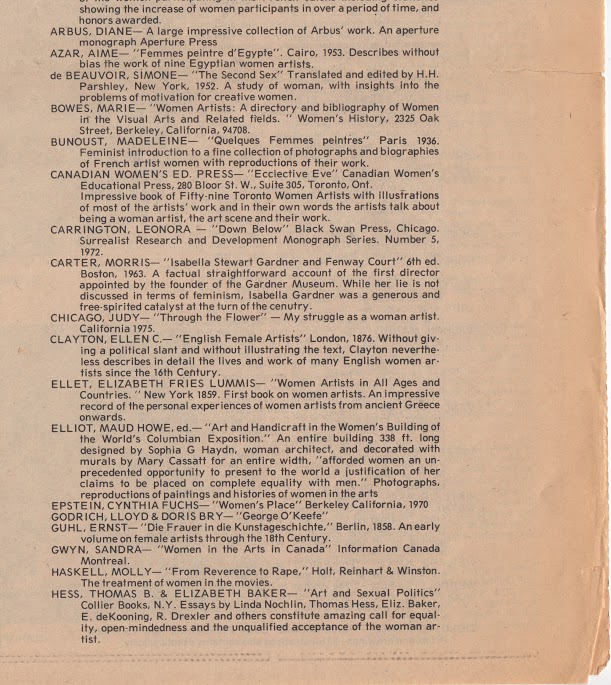 The list also includes an “unprecedented survey” called “Sex Differences in Art Exhibition Reviews: A Statistical Study” from 1972 by June Wayne, that looked at “systematic sex discrimination toward women artists by US media… with scrupulously accurate charts to delineate the facts,” notes Homes. Most publications highlight the achievements of women that have been mainly ignored by the mainstream art world except for one noted:  “Extremely sexist” (Mathey,1951) and another from The Vanguard Artist: Portrait and Self Portrait (Rosenburg, Norris, 1965) where it’s noted “Rosenburg confines the women artist and the black artist to separate ghettos, stressing in his chapter on women artists, male chauvinism and role conflicts; and omitting women’s problems elsewhere.” Now, the word ‘ghettos’ would not be used today, but it’s a great look at a feminist critique of the time.

Homes told me, through email, that it took her six months to make the list with the help of her community. “Feminist artists were enthusiastic about helping one another and promoting the art work and activities of like-minded groups and women. Word of mouth, the mail and the telephone — that was what we had to work with.” In 1973 she was a founding member of PowerHouse Gallery or La Centrale Galerie Powerhouse. It is one of Quebec’s oldest artist run-centres and has a mandate to “expand on a history of feminist art practices and aims to provide a platform for contemporary art that is informed by feminist and gender theory, as well as intercultural and trans-disciplinary practices.”

Homes doesn’t remember the exact connection she had to Halifax or to VANS, but emphasized how strong the network of women was how word must have got to her fast (after just one publication remember) that VANS would happily publish her compiled list. On making the list she said: “I had been building my own personal collection of books that featured women artists and it occurred to me that there was no one place where all these books were listed for those of us who were interested in the history of art by women.” When I asked her about diversity of representation on the list she said “Women artists from other cultures were only found in articles or group exhibitions and were probably not ‘popular’ enough to publish books on at the time. We discovered them on our own and through artists exhibition exchanges with other galleries. Montreal (and Canada) was not as diverse as it certainly is now.” She adds: “As well as Frida Kahlo, there was Betye Saar, Faith Ringgold and René Cox that were admired at that time.”

To understand the context of this time and analyze the list more, I needed an expert. Luckily we have one of the top PH.D’s in feminist Art History at NSCAD, and my faculty advisor for this internship, Jayne Wark.

When I met with Dr. Wark, she patiently listened to my concerns and then explained to me that I need to understand the context of what the Art World was like in the 1970’s. One of the first things she said to me was “It was a desert for women! Let alone any person of colour!”

She explained that the art world was almost exclusively a place of the elite. To become an artist or an art historian, you had to come up through an institution and institutions were full of old white men supporting the establishment of the art industry, which was a place only for investment and blue chip artists. The racism and sexism were very institutionalized and heavily entrenched. No one was interested in talking about or supporting women artists because they were not considered good investments, even if the art was good. It was not unusual to be denied entry to an exhibition solely based on the fact of being a woman or a person of colour. And galleries could and would literally say it to your face that bluntly. There was no hiding the sexism and racism in the more subtle ways that still exist today. Today, the law is supposed to protect people from being discriminated against based on gender, race or sexual identity. But in the 1970’s, that was not the case. Basically, anyone not a white man was considered “insignificant.” It was indeed, a desert.

The spread of information about feminism and women’s art was new. Dr. Wark says that NSCAD offered its first Art History Class in 1976 called “Women in Image, Women as Image Maker.”

Looking at the list, Dr. Wark immediately noticed one book of huge significance missing; American Lucy Lippard’s From the Center: Feminist Essay’s on Women’s Art from 1976. There is a good chance, though, that Homes may not have heard about it by that time, but it is of particular importance as it may have been one of the first times the word “feminist” appeared in a publication. Lippard received an honorary degree from NSCAD in 2007.

We talked about other artists, particularly women of colour, who were significant during and before that time, but most likely not have had anything published about them. Such as the Harlem based painter, sculptor and quilter Faith Ringgold. Ringgold’s quilts at that time told the stories of African American women and portrayed their lived experiences. Another artist whose work I particularly enjoy is, Adrian Piper. Her performance work in the early 1970’s — such as her Catalysts lll, where she stuffs a large white towel into her mouth and rides around on a bus — explores race and gender and the feelings of public othering. Both artists have talked about not being able to get their own stories published and used their work to communicate their experiences.

Thanks to my chat with Dr. Wark, and my emails with Homes, I came away appreciating the reality of the situation for women in the Arts during the 1970’s. Homes’ initiative in gathering this feminist content for the second issue of Visual Arts Nova Scotia fed into the network of artists’ resources and publications of the 1970’s in Atlantic Canada. 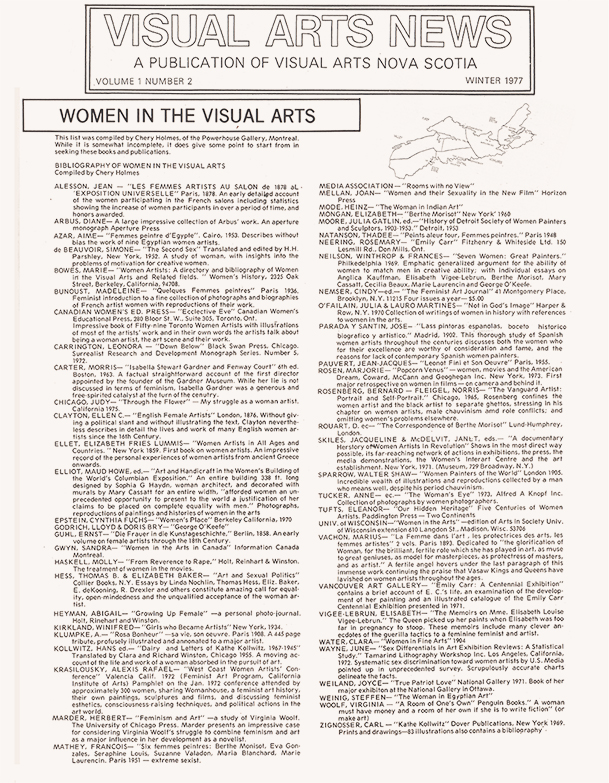