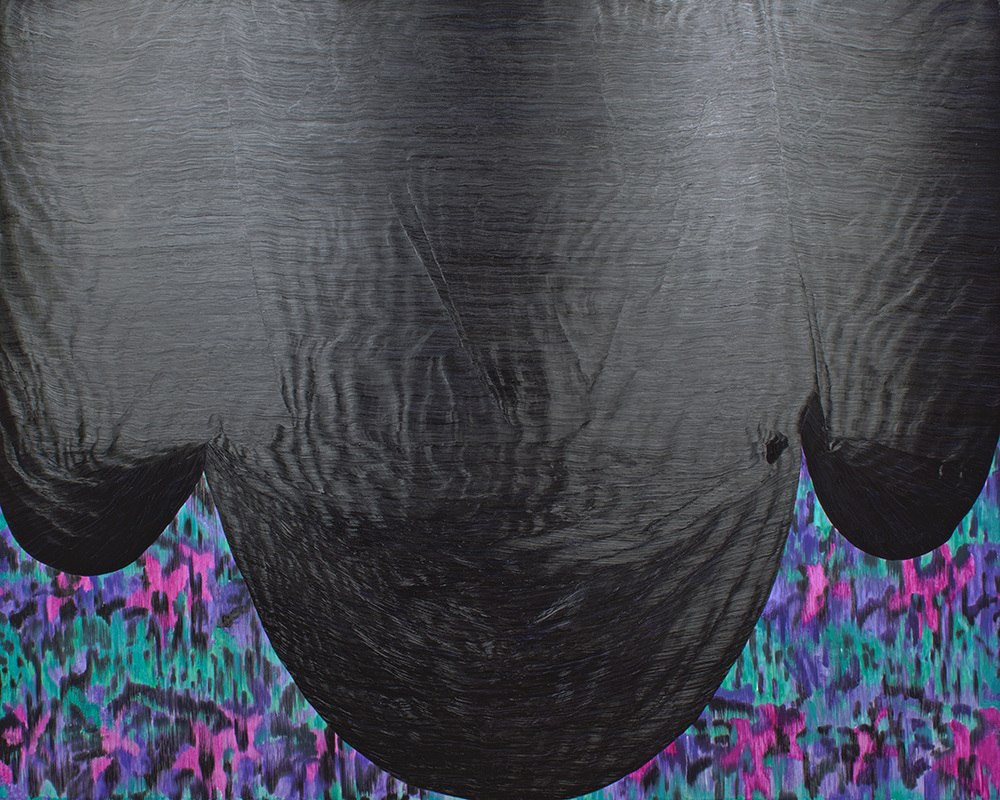 Daniel Hutchinson, a 2008 graduate of NSCAD University, has made one of his periodic returns to Nova Scotia with a small exhibition of new work at the SMU Art Gallery. Well, the room is small—the exhibition is on view in the side gallery, a space approximately 20 x 16 feet. Three distinct series of works by this prolific artist are on view in Bright Black, and each one of them is distinct enough in approach to warrant being featured on their own in the space. That there are 15 paintings crammed into this space is not the most helpful aspect of this exhibition; frankly, given the individual power of the works and the modest size of the room, four or five paintings would have been ample.

However, that complaint aside, it is a pleasure to see new work by Hutchinson, who for the past decade has been exploring the artistic possibilities of black paint, sculpted with striations that capture or reflect light in ways that create the illusion of space. The movement of the viewer, back and forth and side to side, changes the appearance of the works, either flattening them or creating the illusion of folds, ripples, cavities and projections, all with the most minimal impasto. 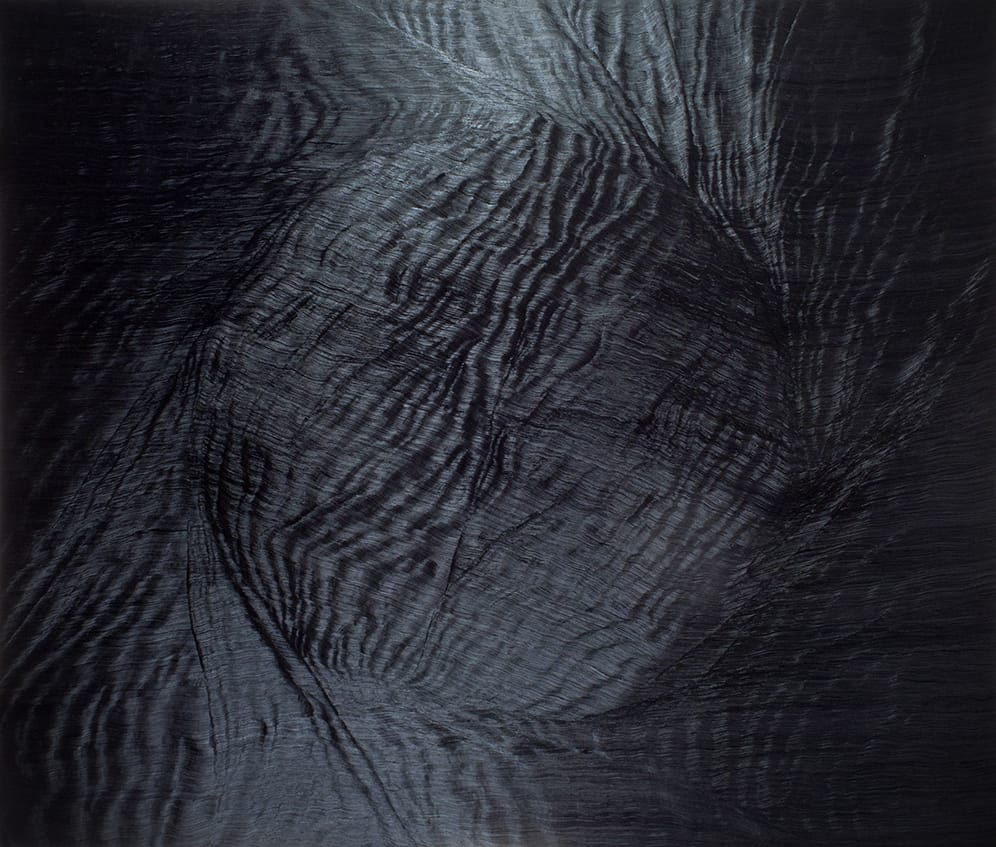 I have been following Hutchinson’s work since he was a graduate student at NSCAD University, and it is interesting to see how the work has remained consistent, while still evolving and changing from series to series. His graduating show featured mostly black paintings (with central coloured figures) where the striated texture created architectural forms through the refraction of light in the paint. Since 2012 the works have become less representational, relying more on overall surface effects than on any suggestion of imagery. Where once he directly referenced landscapes and architecture, specifically theatres and stadiums, tellingly, sites designed to orchestrate the movement of people and to control visual effects, one now searches for references: water, cloth, oil, sky. The possible referents are limited only by one’s imagination and it takes an active act of will to pull back to seeing paint, following where the painter takes you along that route.

Hutchinson’s work has always been primarily interested in light and space regardless of any apparent subject matter, as Sara Hartland-Rowe noted in a review of a 2009 exhibition by Hutchinson: “With the simplest of means – paint striations in essentially monochrome painting—Daniel Hutchinson engages the viewer in a complex, spatial navigation of theatre and stadium, highlighting the body’s relationship to gravity, horizontality and verticality, and virtual space.”The new paintings eschew representation, but delve even deeper into the visual possibilities of space, and the choreography of the viewer that is played out in each work. 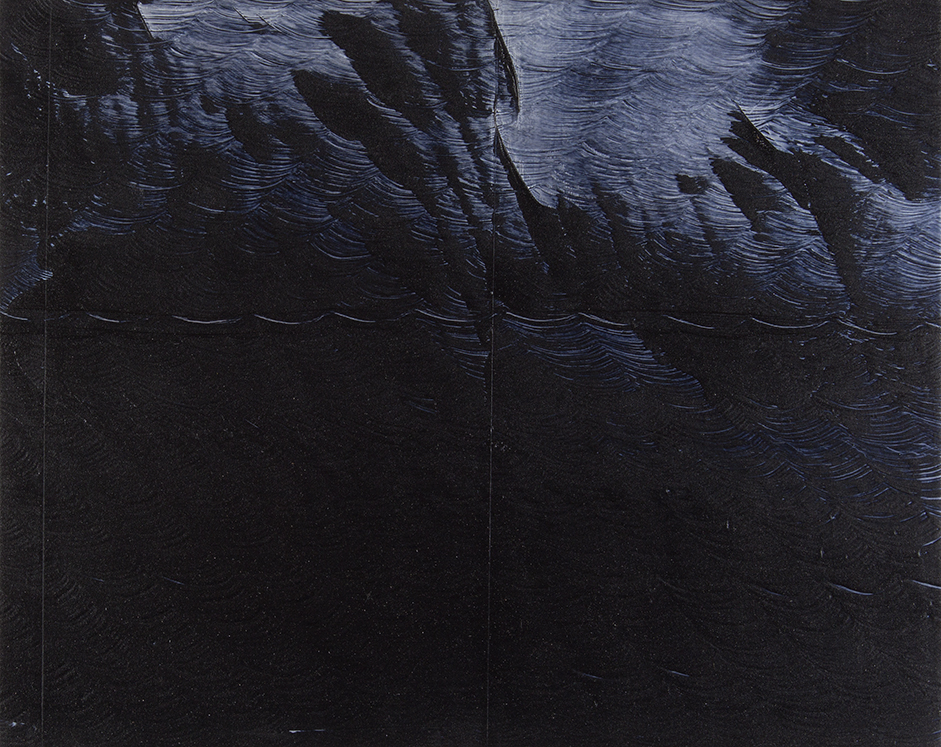 In a concurrent exhibition in Kitchener, Ontario, Hutchinson showed three large paintings incorporating fluorescent lights, with added colour, reds and blues, that suggest the faint traces of underpainting seen in the black paint. As one moves back and forth in front of the paintings, the added light creates quite dramatic effects. The works in Bright Black depend on the light of the regular gallery lighting, and I don’t miss the showier effect of the works on view at the University of Waterloo. The traces of colour remain—in one series the black is laid over underpainting of floral patterns, varyingly abstracted, looking like wall paper or fabric designs. The colour palette is primarily reds, blues and greens. The pictorial underpainting is jarring, especially in contrast to the amorphous black forms that, in this series, seem to be floating over the colour fields, yet satisfying for all that.

The second series on view also makes use of the effects of underlying colour, in this case the substrate which is a bright silver material, cut up pieces of thermal reflective fabric used for emergency blankets. The slick surface of the metallic fabric caused the paint to sit uneasily on the surface, looking as if it is in the process of slowly sliding off. These nine paintings, all titled 16 Days at Sea, each reflecting one day (second, third, fourth and so on), are quite modest in scale, but nevertheless they feel quite cramped on the wall on which they are displayed. It’s unfortunate, because they are very compelling objects that demand study. Painted during a residency at Gotland, Sweden, these works have both an openness and claustrophobic feeling, perhaps a remnant of their creation in a small studio facing an immense, black, sea.

The last series, three all black paintings, are the most overtly sculptural of the works on view, fully utilizing the illusory qualities of reflected light to create three dimensional effects of striking verisimilitude. Emphatically non-representational, these work nevertheless make one think of objects. They hark back to his MFA exhibition, flipping the figure ground relationship, with black on coloured grounds rather than the reverse.

Bright Black is a thoughtful and rich exhibition, the work of an artist deeply engaged in thinking about painting. Smart, complex, beautiful: the works provide real intellectual and visual pleasure. Quite simply, they reward our looking, with increasing value the longer and harder we look. 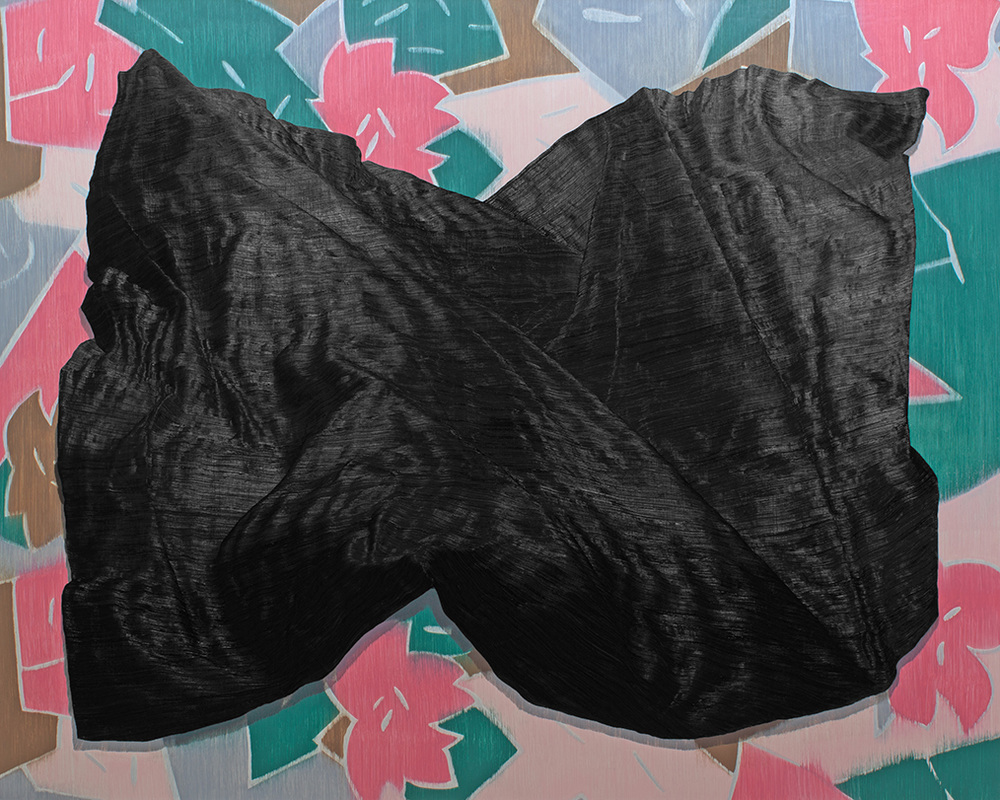 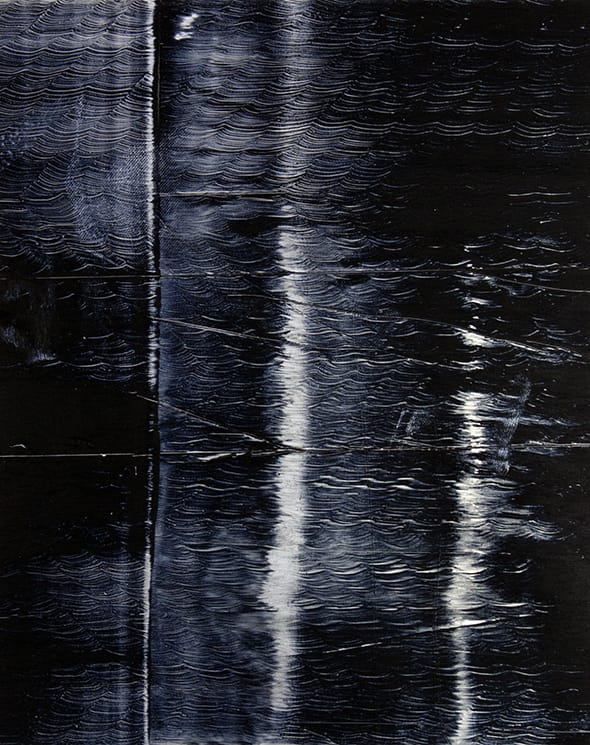 Looking back: Our version of "women in the arts" in the 70's Previous post