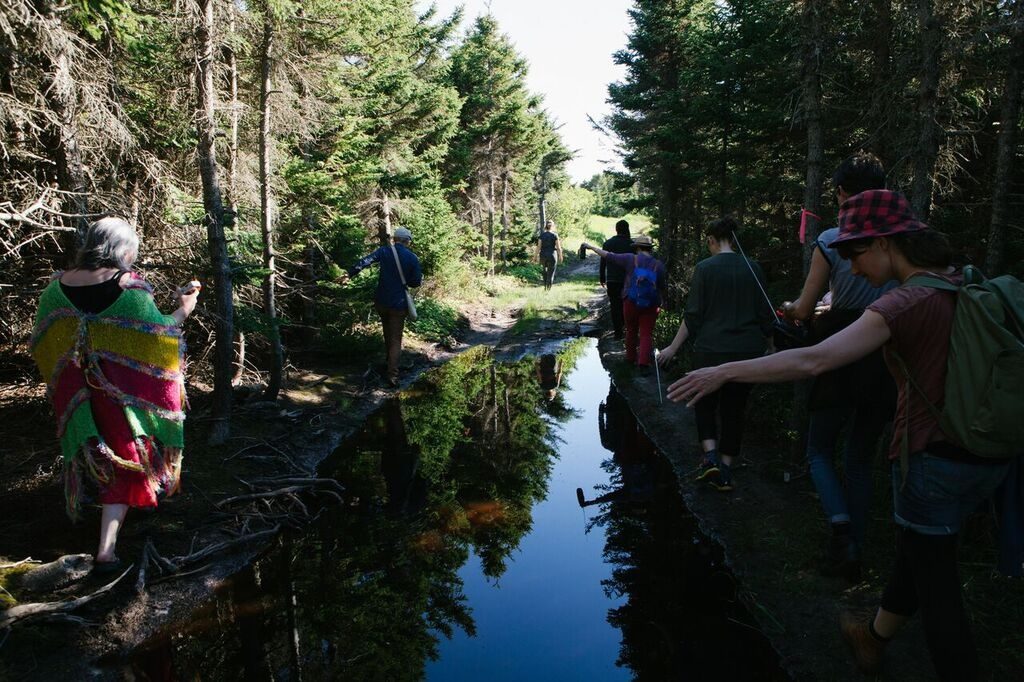 For me, sound and landscape go hand in hand. We travel through life being highly influenced by the sounds in our environment. Although hearing is not at the highest point of the sensual hierarchy, the sensuous space of sound is a powerful knowledge position to work from. Sound is used in medicine to determine the well being of our bodies and is used in geology to connect and predict the makeup and movement of the earth. It resonates through all matter, the rock, the path, the tree and the land, and it is perceived through our ears, our skin and our bones.

This intimate relationship between the land, human, song and sound plays an important role in the theme of the artist residency and event created by curator Caroline Loncol Daigneault, in collaboration with the Magdalen Island’s Artist Run Centre AdMare. The theme Songlines draws directly upon the Australian Aboriginal ways of knowing that include Dreamtime and Songlines as it recalls the essence of the 1987 book written by Bruce Chatwin, The Songlines.

From this point of knowing, it is easy to enter the sound work of New Brunswick born Samuel Thulin, Compositional Routes of the Magdalen Islands. Dr. Thulin is an academically based sound artist whose process includes what he describes as “situated composition.” This method is not only about utilizing and challenging new technologies’ capacity to create mobile sound studios or compositional situations beyond professional boundaries, it is also about dissolving the walls of the theoretical and established sound studio. Thulin is working to bring attention to the ways in which sonic and social space are composed and composing forces. Situated composition brings together and acknowledges the impacts that social, material, virtual and digital elements have as co-composers of new sounds and of each other.

Compositional Routes of the Magdalen Islands looked to local meteorological and geological components for inspiration. The Dunes, the sand, the wind, the sea and erosion combined with with the method of granular synthesis played key roles in the composition of his artwork. He created the work in-situ over two and a half weeks of residency. Thulin presented the final piece to the public in a participatory performance, a collective walk through a forest and meadow landscape with transistor radios and no lack of mosquitos. 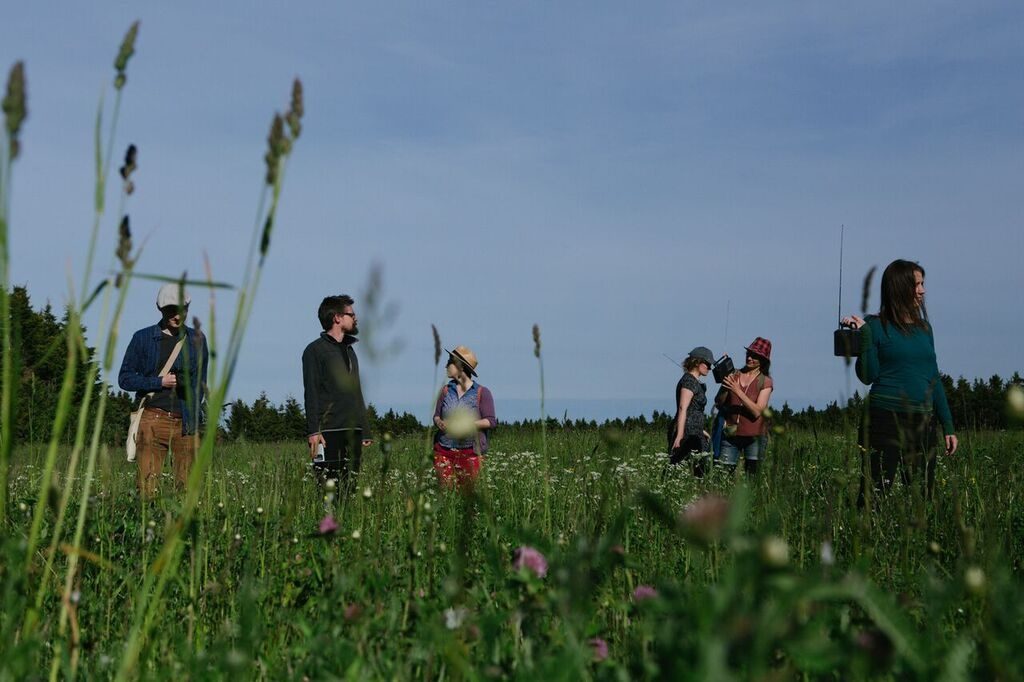 I participated in a performance including about 10 people plus the artist.  Thulin lead the performance by introducing the participants to the concept of the sound, the method of granular synthesis and the use of sounds from the sea and the coast rather than sounds of the forest or other inland elements. He also outlined the guidelines for participating in the performance: we were to walk, listening collectively to the sound as it was affected by the physical realities of walking in a group through a forest path. He intended for us to encounter erosion and interference as we experienced being near or distanced from the source of the transmission.

With transistor radios in hand, eager participants followed Samuel into the woods as he began the transmission. The experience was just as Thulin explained it would be — the sound became clear as I got closer to the source of the transmission, and the sound became deteriorated with interference from other broadcasts as I trailed behind the main group. The element I wasn’t expecting to have such an impact on my experience during the performance was the ever present white noise. It echoed from the radios that were out of transmission range. The white noise resonated with me as the voice of the wind, even though it wasn’t necessarily the recorded voice of the wind. The majority of my trip to the Magdalen Islands was engulfed by the region’s unforgiving winds. And I recall mentioning to my partner on multiple occasions that the wind was like an unrelenting white noise, definitely a characteristic of my Magdalen Island soundscape. Hard on the head but still a somewhat soothing and consistent characteristic of the Islands.

Thulin’s project Compositional Routes of the Magdalen Islands was one of my favourite pieces during my Songlines experience. It connected to the theme of the project in a poetic and material way. The final presentation was approached as an extension of the artist’s research, as the performance the “soundwalk” is to be considered part of the creation of the work. And although I don’t feel that didactic explanation of the inner workings of an art project always contributes to the strength of a project, in this instance it was helpful to set the stage for the players and enhanced the focus of my listening through the process of performing.

For me, Thulin’s piece created a dynamic intersection between the material and social realities of the island. Not only are the Magdalen Islands at the mercy of the sea socially, as an isolated Island community, the material composition of the Islands is primarily of sandstone, the kind of land that is far too easily eroded by the unrelenting ocean waves. The coastline of the Magdalen Islands is unstable, constantly shifting, being reshaped and dissolved into new formations. All it takes is one good storm surge and whole sections of coastline can disappear overnight. Or in the case of Thulin’s project, a slight change in the frequency and his composition is lost to the white noise of the wind.

Becka Viau attended the Songlines artist festival in the Magdalen Islands and wrote a series of blog posts on the experience for Visual Arts News.