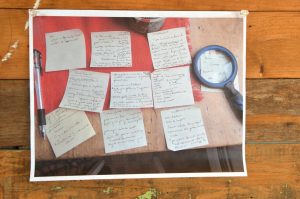 Maps and notations collected by Marie-Line Leblanc and Sara Dignard during their project (on display at the Admare headquarters). Photo: Becka Viau

I first met Marie-Line Leblanc and Sara Dignard to talk about their project Lines of Desire — Geopoetic Survey of our Neighbourhoods in the community of Grande Entrée. It was a hellishly windy day, the kind that takes your breathe away and submerges you in white noise.

Grande Entrée is a remote, eastern fishing village, isolated from the rest of the Magdalen Islands by the municipality of Grosse-Île. Its people and landscapes are shaped by the sea; I would even say it has been miniaturized by it. Like many North Atlantic coastal landscapes, the plants living there grow dwarfed in order to survive the salt spray and unforgiving winds. It is a small place with a declining population, and it is very much isolated in its location. You could say it is an Island within an Island. These geographic and social circumstances force people to be connected more intimately and creates a comfortable insularity. They also can normalize the diaspora of youth and the loss of intergenerational memory of place.

Leblanc and Dignard — two French artists, one from Montreal and one from the Islands — set out to map this place, to uncover a new way of knowing this place from an outsider’s perspective, as part of the Songlines artist residency series in the Magdalen Islands. They were to deny the Google Maps or other formal ways of mapping the area and seek the unwritten in the unexpected. Their perspective was one of astonishment with the very seemingly small and unseen, investigating the everyday from a place of intense curiosity and attention to detail. They allowed everyday gestures and serendipity guide them through the story of the community, all the time collecting specimens from their journies and re-articulating the experiences through drawing, poetry, photography, sound and video. 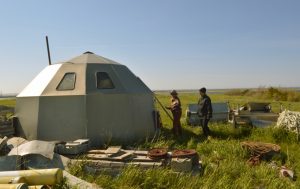 The site where the artists were to present the public presentation in Grand Entrée. Photo: Becka Viau

Building upon a geopoetic approach, the duo were determined to be lead by locals down their everyday paths. Some people walked with them on their favourite footpaths, while in some cases the artists only walked the memory of the path being shared. Through the process Leblanc felt they were “actualizing the paths for people” — perhaps, giving the everyday some conceptual power by acknowledging it as a space for knowledge.

To reach the community and create the connections that would drive their project, Leblanc and Dignard relied on the openness of local people to refer them to the next subject. In social science, the surveying approach of following one connection until it takes you to another is called snowballing, building a sample of people from social circumstance. Snowballing is intentionally intimate to ensure that hidden experts and populations can be reached or uncovered, and that trusted relationships can be built quickly. It has also been used to scientifically validate local knowledge and unregistered expertise, and I noticed the artists using this tactic as well.

Dignard reflects on the what she considered to be her role as a vector between community members, collecting and sharing stories from one neighbour to another: “It was like our actions have created a secret society.” Leblanc agreed: “ We had many emotional points as community connectors.There is something special in the meeting of strangers on an ordinary path.” One memorable encounter included an elderly man who could no longer walk the path he wished to take the artists down. Instead he shared the knowledge of the path as a story. Dignard and Leblanc found the path and walked it as they understood it to be. On another walk the artists stumbled on an abandoned house and collected some peppermint herbs from the garden. A few days later, via word of mouth, they connected with the owners and shared a cup of tea made from the peppermint found on the abandoned property. Over the cup of tea the house owners revealed that they hadn’t been back to the property for many years, since a member of their family passed away there. As the artists shared their story of finding the house on a walk and collecting the peppermint leaves, a whole world of memory was revealed in conversation.

The Eastern Part of the Magdalen Islands is an incredible place to be in residency. The landscape alone is enough to transport you to a new world. Yet, somehow the restrictions on the format of the residency seemed to challenge the ephemeral nature of Dignard and Leblanc’s research and limit the amount of time they could invest in the collecting of experience rather than preparing for a formal public presentation. 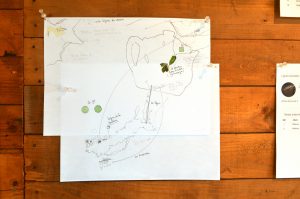 Yes, three weeks is a good amount of time for a residency, to build a conversation on a theme, renew creative energy and welcome some reflection on studio practice and research, but Lines of Desire made me wonder: Why are we constantly tagging on the often gratuitous public presentation at the end of these types of projects? At first, I wondered if it was due to funding restrictions, but I now feel that the public presentation is a safe ending, or an expected packaging of art activity that institutions (artist-run or not) end up deliberately programming. Why? I could speculate, but ultimately, I feel it serves as an easily digestible way of building some form connection between the community and the art world. Is it valuable? Perhaps. Dignard described the final presentation of their project during Songlines  as “a gift back to the community.”And so, I suppose, who can deny a gift?

I don’t feel the work could finalize or resolve itself at the end of the three week residency, and I am surprised at the lengths the artists were going to to try and formalize the research so quickly. Again, is this a symptom of current art culture, the nature of first time collaborations or the drive of the artists? I was left unsure. For this project, the action of formalizing or materializing the residency experience seems to be pretty integral to revealing the third space that geopoetic expression aims to open up. I encourage the artists not to stop at the expected public presentation during Songlines and urge them to continue the collaboration.

But I would also like to see residency programs built to support the re-materialization of the artist’s experiences or the re-membering of the findings of their research after the residency. Many artists residencies are built to put the working artist on display, interacting with or even just on view for the community, while many also include public events around the very fresh work in progress. The problem isn’t so much in the public event; Rather, it is about the desire or urge to contain the work of the artist-in-residence in a package that is easily digested by a general audience. Instead of supporting the artist through a more fluid and ephemeral process of research and creation to a resolved public presentation, we often leave the artist’s actions dangling in the “gift back to the community.” This is doing a disservice to both the host institutions, the artist and the public. 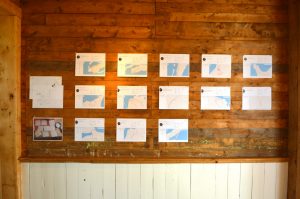