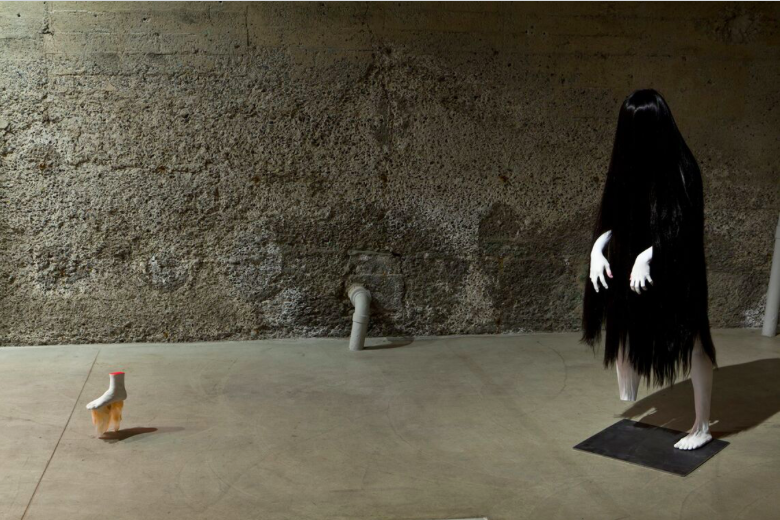 Artist Marigold Santos creates the kind of work that resonates with viewers on a deeply personal level, as you discover talismans and symbols embedded in each piece that feel as though they’ve been placed there just for you. Inspired by the terrifying tales of mythical monsters she connected with as a child, Santos unravels her memories and experiences to form her own personal myths, inspiring viewers to do the same.

Lizzy Hill interviews Santos, following her recent exhibition MIRROR/MOTHER (fragments) at Eastern Edge in St. John’s, about her fascination with the occult, the influence of folklore on her work and her identity as a Filipina/Canadian woman. 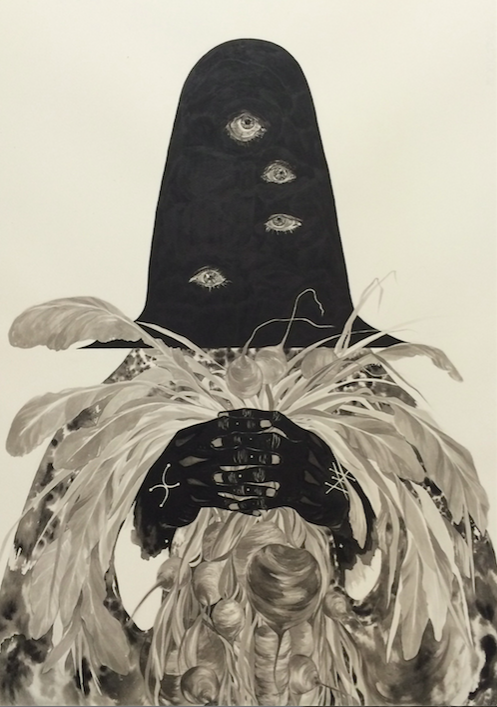 Lizzy HiLL: What impact did your family’s move from the Philippines have on you? Where is home?

MARIGOLD SANTOS: Our immigration is a huge part of my work, as I reflect on it as a time of change and adaptation at such a young age—it sneaks up on you, and you are so unaware of the process. I didn’t know how to speak English, and then in no time, I did. I was a young girl when we moved to Canada, and all I wanted to do was become Canadian, fit in, whatever that meant—learn pop culture, learn the language, learn the social politics of children. A lot of the colour palettes and designs of the time make their way into my work. I consider Canada my home, but my roots are very important to me. I explore what they mean, in tandem, everyday, and in my work.

LH: I have to admit, when looking at your work, Blanket Asuang (Big Sister), I had to Wikipedia what an “asuang” was and found out that it’s “a shapeshifting monster” that combines traits of “either a vampire, a ghoul, a witch, or different species of werebeast” from Filipino folklore, which sounds quite terrifying! Were stories of these creatures part of your upbringing or did you discover them in later life?

MS: The folklore of the Philippines is incredibly special and rich, and the stories vary depending on the region and the storytellers. That is what I most love about folklore in general—the idea that there are many elements that remain the same, but that through the oral sharing, variations can occur and thus change and transform the narrative. They are also ever-evolving and changing, informed by their landscape—an organic and definite, yet intangible thing.

My aunt, Tita Rosel, was pretty much responsible for introducing me to the asuang, and its many characteristics. When I started making work that addressed multiplicity and fragmentation (and referencing my family’s immigration from the Philippines to Canada as a departure point) it was so fitting to look at the figures in my work as asuangs also, reconfigured to speak about a greater sense of self-hood and fragmentation. The asuang inherently severs from the waist, and divides itself, discarding it’s lower half, while the upper half hunts in the night, and must rejoin it’s lower half before night’s end, or risk dying fragmented.

LH: There’s a clear fascination with the macabre in the works on view in BLACK MIRROR [Santos’ recent exhibition on view at Ontario’s DNA Artspace and Hamilton Artists inc, as well as Calgary’s Pith Gallery]. I’m thinking of one painting in particular where you feature a golden corpse serving as fertilizer for a beautiful array of flowers and foliage. Is death and what comes next something that you ruminate upon often? Or would you say you use death more as a metaphor for something else? 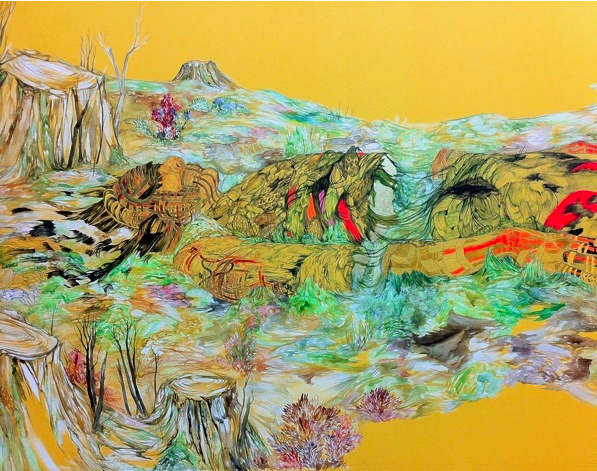 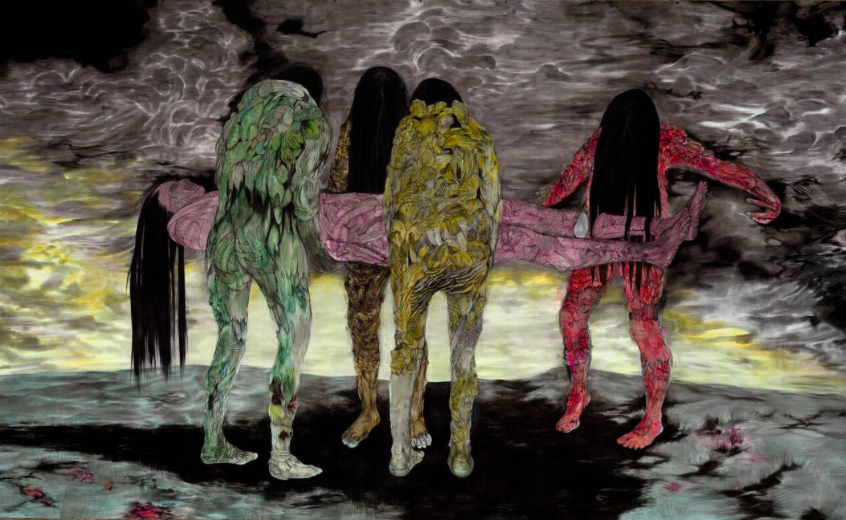 MS: The golden piece is the third of a triptych [the first two are light as feather, stiff as a board (1) and (2)] and features a re-occurring figure that is in the process of levitating—whether about to float, or about to sink. The figure is caught in interstitial time and space. It began as a series that played on my themes of multiplicity and fragmentation, accessible magic and childhood games and folklore. So this third one, re-grounding, is the figure fallen, in the process of decay and decomposition, and is in a space that is partially recognizable, but at the same time a void realm. The cycles of death and rebirth, creation and destruction, attachment and detachment, woven and unravelling are present in this piece. Because my work is cross-referential, I thought it applicable to include this older work in with BLACK MIRROR [BM] because it relates to my previous themes, but also addresses the current ones in BM, those of selfhood, empowerment, concealment and revelation, light and dark (in bodies of light, and in passions and desires).

LH: There are elements of magic and ritual at play in your works, as you integrate talismans like teeth into your art. One gets the sense that the works themselves are designed to be part of some unknown ritual, evoking hidden spells upon the viewer—Is the occult a pure academic interest for you or does a belief in the supernatural play a role in your personal and creative life?

MS: The weird, the otherworldly, the supernatural, the occult, horror and fear have always been part of the landscape of my everyday, even as a child—especially as a child! My parents didn’t shelter me from all things horror-themed because I was drawn to them so much. Perhaps this is why I incorporate the awkward and scary into my work. I’ve always liked to scare myself; I still do. What it is about these things is that they require a sense of belief to make them work, because they are unexplainable and unknowable. So we push boundaries as kids to see how they affect us, what we fear, what we can take, what we can’t.

Objects in my work that appear to be talismans of sorts are just that. They stand in for the power of belief we place on things, to make them magic—to make them real and have a dual life, beyond what meets the eye. The body in my work always appears fragmented to an extent, and the severing from a whole also stands in for a greater talisman. And when this conceptual body comes together to make new configurations, new conversations, new dialogue, can occur. And the possibilities are what make them magic and powerful.

LH: BLACK MIRROR directly references the tool painters in the 18th century used to frame their scenes. What drew you to this reference?

MS: The reference to the black mirror as a tool used by painters is not so much about who was using the tool, but how it was used. Painters would turn their backs to their subject matters and view the reflection through the black mirror, which enabled them to cancel out the visual noise, and helped them to compose and edit their imagery. I loved the idea of turning your back to the thing you wanted to see and then re-inventing it, creating a new visual narrative. In my work I want to edit and re-configure experience and ideas and thought into my own myth.

LH: in Shroud (overhead) and Shroud (crouching), we see two different images of human characters huddled together so closely that it’s impossible to make out what kinds of interactions they’re having with one another—There are secrets being kept from us as the viewer, which I read as a theme in your work. We live in an age of the confessional personal essay, where many of us spew our deepest secrets on social media—Do you feel something is lost when we move farther and farther away from having a private inner life?

MS: The images of figures draped in shrouds began with BM, and I’ve since continued to create figures with this reoccurring cloak of fluidity and ink. It can be read as oil, or dirt, or rot, or mud, or blood or the cosmos even, but what is most important for me is that the shroud represents experience. It is not a physical garment, so much as it is an image that stands for a second skin. For me the shroud does not hide or conceal (even though at first glance it appears to) but instead it reveals—it is a choice to wear our experiences as informed by our ever-evolving surroundings that make up the fabric of our lives. In terms of private and inner lives versus the public, I think it’s important to always have a choice, and to be able to have to right to practice that choice. There are things we want to keep special and secret and there are things we want to share.

LH: Can you tell me a little bit about what the creative process is like for you? Do you work from life? From memory? With a plan of what you’re going to draw?

MS: Drawing can be very intuitive for me, and sometimes it can be very organized and planned. Sometimes I’ll draw thumbnail sketches of what I want a drawing to look like, but minimally, because I love letting the drawing take place all at once, to include the unexpected marks, to allow it to live, and then each mark you place invites you to respond. I work from both life and memory, from models (myself mainly) and from references. I listen to a lot of music when I draw, lots of heavy metal, lots of Dolly Parton and audiobooks—and eat a lot of snacks along the way. 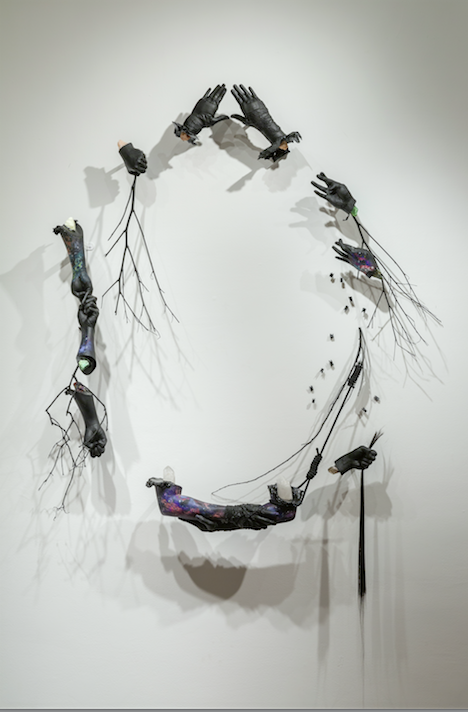 Exploring the landscape with Samuel Thulin's "situated composition" Next post

Lizzy Hill is the editor of Visual Arts News and a freelance arts & lifestyle writer. Connect with her on Twitter @LizzyFHill