NSCAD has its fingerprints all over the Venice Biennale this year

There’s a sizable Nova Scotian connection this year at the 57th Biennale di Venezia—and still time to check it out as the Biennale doesn’t wrap up until November 26.  You’ll find a collection of artists this year with distinct NSCAD University ties. Sharing this Halifax connection are: Teresa Hubbard/Alexander Birchler at the Swiss Pavilion, Lani Maestro at the Philippine Pavilion, Lou Sheppard at the Antarctic Pavilion, and Bruce Barber at the European Cultural Centre’s show Personal Structures: Open Borders. 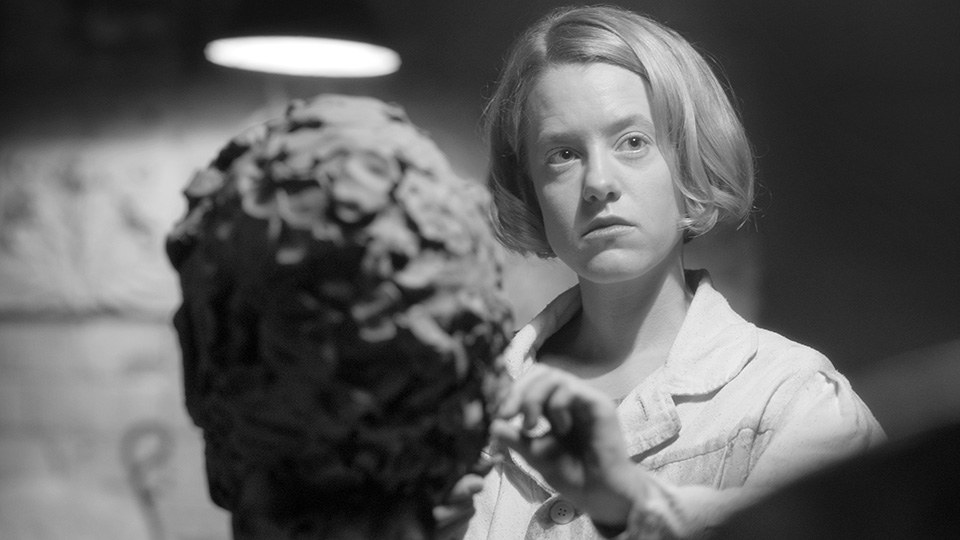 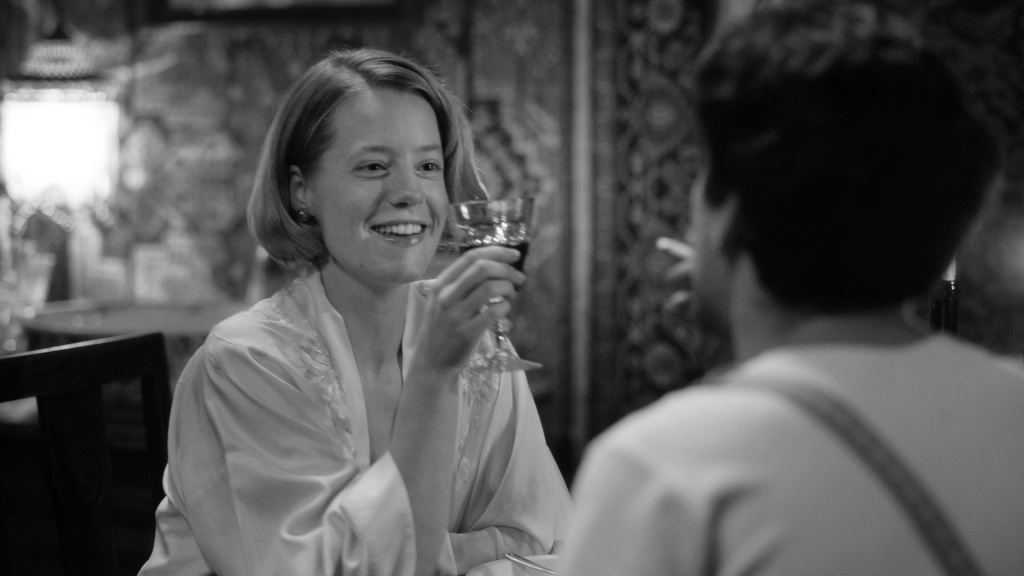 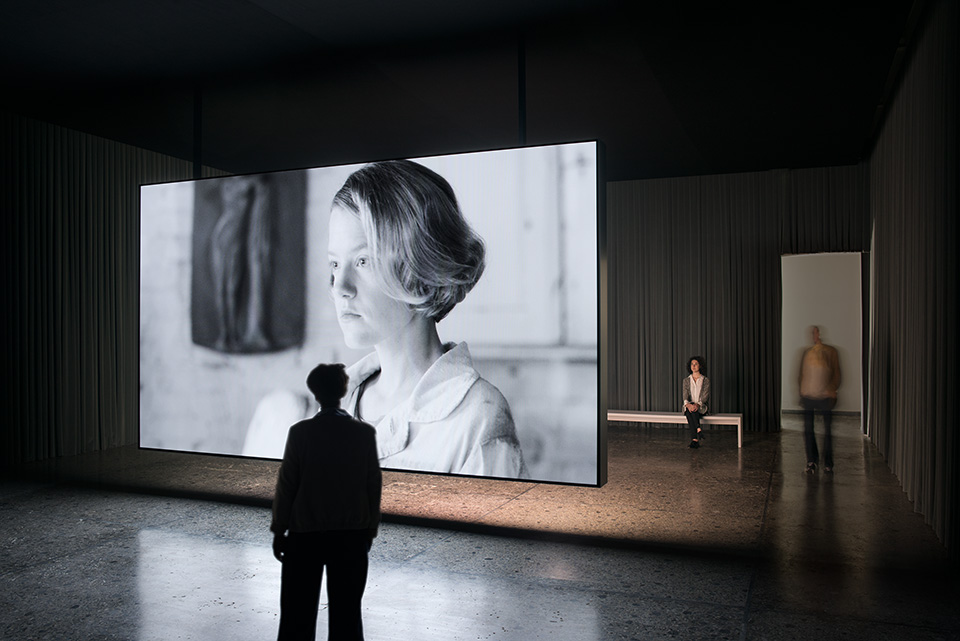 Swiss-American artist couple Teresa Hubbard (MFA ’92) and Alexander Birchler (MFA ’92), in conjunction with Carol Bove, represent Switzerland this year in the Giardini, taking aim at the legacy of Swiss artist Alberto Giacometti. Their exhibition, Women of Venice, takes its name from a sculptural group called Femmes de Venise by Giacometti. Considering himself a transnational or international artist not to be limited to one nation, Giacometti refused to represent his native Switzerland during his lifetime and instead included Femmes de Venise as his contribution to the 1956 Biennale at the French Pavilion, his adopted country (Giacometti would later show his work in the International Pavilion at the 1962 Biennale).

The work at this year’s pavilion operates with a complete absence of Giacometti’s work.  Hubbard and Birchler’s main piece, a video installation called Flora, weaves together fictional and documentary material projected onto a double sided screen, showing two separate videos with a singular sound track and narration.  This work explores the love affair between American artist Flora Mayo and Giacometti in Paris in the 1920s.  Hubbard and Birchler reimagine Mayo’s life and move Mayo from the periphery of the history of Giacometti’s life to centre, reflecting on the capabilities of joint artistic practice—of which Hubbard and Birchler engage in themselves.  Mayo’s centrality to this work functions to destabilize the position of Giacometti as a canonical artist, presenting his life and work as one occurring within a vibrant constellation of relationships with others, all the while exploring the neglected work of Mayo herself.  The feminist implications of this work of art historical recovery should not be overlooked—This piece moves to recontextualize Mayo’s life and work away from Giacometti’s history into a position that is totally her own.

This year’s Philippine Pavilion in the Arsenale, includes work by Filipino-Canadian artist and former NSCAD professor Lani Maestro (MFA ’88).  The Spectre of Comparison, curated by Joselina Cruz, features Maestro, along with painter Manuel Ocampo, and draws from the novel Noli Me Tángere by Jose Rizal.  The Spectre of Comparison (“el demonio de las comparaciones” in the original Spanish) captures the experience of Rizal’s protagonist who has visions of Europe while gazing at the botanical gardens of Manila. This experience of being unable to gaze at the Philippines without seeing Europe, and vice versa, is taken as a starting point for an exploration of fragmented identities in the face of the nationalisms created by making comparisons.  Nationalisms of which are frequently still reckoning with their imperial or colonial pasts.

Maestro has three works included: No Pain Like this Body (2010/2017), these hands (2013/2017) and meronmeron (2017).  No Pain Like this Body is a text-based installation in ruby-red neon, these hands features glowing text in blue neon and meronmeron—which she created for the pavilion—is an installation of a series of benches, inviting the visitor to take part in a moment of reflection.  The neon works recall seedy downtowns and urban alienation. The human element represented by the works’ text in the synthetic and almost alien medium of neon lighting keeps the viewer at a distance, yet invites contemplation on the human lives kept from flourishing by circumstance and the broader movements of history.

At the Antarctic Pavilion in Palazzo Molin a San Basegio, Halifax based artist Lou Sheppard (BFA ‘06) presents Requiem for the Antarctic Coast (2017) — an aural exploration of shifting ice masses along the Antarctic coast. Sheppard places satellite imagery on a musical staff, translating coastal features into musical notation.  The visitor can listen through headphones to this composition while gazing at a hand drawn map of the geographically created notation. This work aims to find a convergence between a scientific and poetic understanding of Antarctica.  By disrupting a solely scientific approach, Sheppard hopes to challenge the appropriateness of such epistemologies for the uniqueness of Antarctic geography and politics.

New Zealander-Canadian artist and NSCAD Professor Bruce Barber has work which makes an appearance this year at the Personal Structures: Open Borders exhibition in Palazzo Mora.  Personal Structures: Open Borders—a collateral event hosted by the European Cultural Centre—consists of a multinational group of artists across three venues. Barber’s piece, party without party (2005/2017), consists of The Surrealist Map of the World (1929), originally published in a Belgian magazine called Variétés by an anonymous artist, printed on a wall as well as a video shown on a small screen. The map features physical distortions and selective omissions of place names and geographical features. The map Barber’s printed on the wall in Palazzo Mora deviates from the 1929 original and previous installations of this work by featuring an added line extending horizontally across the map indicating where the U.S.-Mexican border would normally be.  Barber colours this line across North America red, conjuring thoughts of the wall Trump promised during his election, symbolically dividing the rest of the world into North and South.

Barber’s accompanying text starts by invoking Herman Melville’s story Bartleby the scrivener, in which the character Bartleby simply states that he would “…prefer not to…” perform work for his employer at a law office—an example of a willful act of noncooperation with a broader system.  Barber’s party without party asks us to consider the potentiality of leaving conventional party politics of ‘left’ and ‘right’ in the past, using the map as a point for considering how the structures created by history affect us currently.

NSCAD alumni are having a good year at this Biennale. Representation of NSCAD across multiple shows and national delegations underline the school’s place in the broader art world, as well as Atlantic Canada’s slow move away from the international art world’s periphery.  Additionally, it illustrates a challenge to the Maritimes’ own position on the periphery of the Canadian art world.