This profile was originally published in the Spring 2011 issue of Visual Arts News. Ursula Johnson has now been shortlisted for the Sobey Art Award. 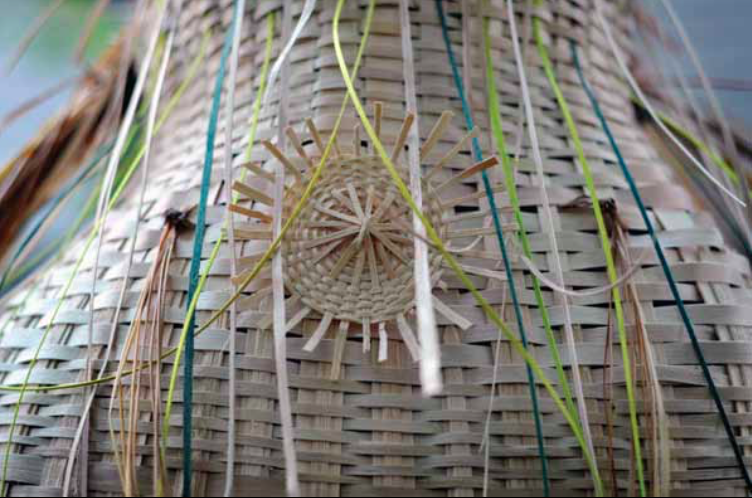 Ursula Johnson, back side of Elmiet headpiece, 2010. Photo: Krista Comeau

Ursula Johnson remembers being around nine years old when her great-grandmother passed her a knife and asked her to try her hand at basketry. She quickly learned how to shave the wood into splinters, making satin-like ribbons to weave into baskets. Like her great-grandmother, Caroline Gould, Johnson found she entered a meditative, trance-like state while making baskets: “I find that the process can be very magical and very exciting because you begin to weave and it’s almost as if the wood is telling you what direction to move in and what form to create from it,” says Johnson.

Today, Johnson is working to keep Mi’kmaq basketry alive, challenging the role of the basket in aboriginal and non-aboriginal society. Her curatorial endeavour, Kloqowej (Star), is a 30-year retrospective of Gould’s work, which showcased at the Mary E. Black Gallery. Gould weaves intricate twisting patterns of red and green tones into her baskets, bending ribbons of black ash (now rare in Nova Scotia), sweetgrass and maple into surprising forms, such as bells, stars and cradles. Some of her baskets are embellished with so many spiralling motifs, they bear more resemblance to decorated cakes than your typical basket. 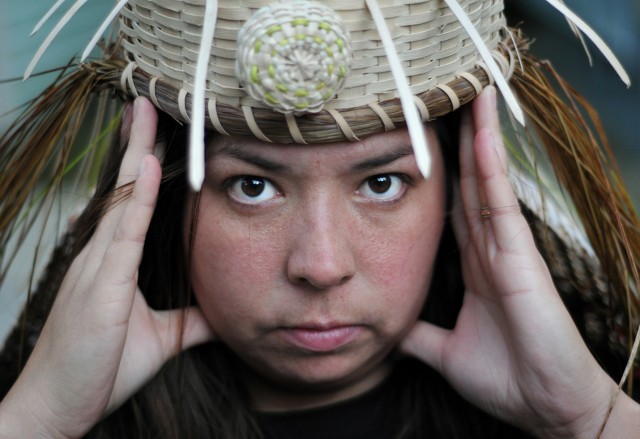 Johnson placed Gould’s pieces on pedestals behind glass, an act which honoured Gould’s work but also intimated that the Mi’kmaq basket could be on its way to becoming an anachronism in today’s world of plastic. “It’s the idea of taking an aboriginal artifact or an indigenous artifact and locking it behind a glass and displaying it for people to see. It kind of insinuates almost a necromancy that’s happening with the work,” explains Johnson. She recalls that many gallery visitors actually assumed that Gould had passed away, when in reality the 92-year-old still teaches basketry from her Eskasoni home.

Johnson is concerned that Mi’kmaq baskets will become obsolete, referenced only in archives or glanced at as artifacts on the dusty shelves of art collectors. “The majority of Mi’kmaq basket weavers today are older people. There are a few young people from different communities who are doing it, which is really great. I just hope that they continue to do it.” Johnson feels keeping the traditions of Mi’kmaq basketry alive is the responsibility of both the aboriginal and non-aboriginal communities and suggests that public schools teach students about basketry. 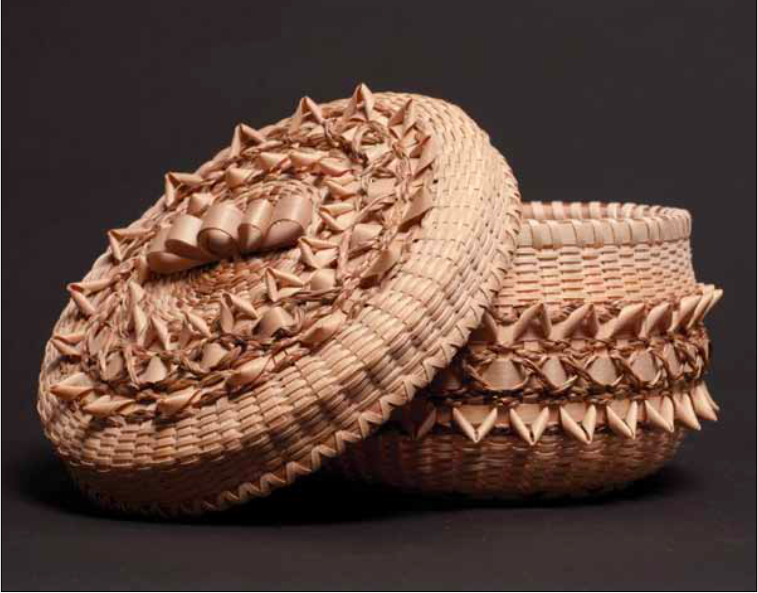 The danger of becoming estranged from one’s culture is all to real for Johnson. In her teens, she left the Eskasoni First Nation reserve for Halifax. Being away from the Mi’kmaq community was bewildering for her, something Johnson explored in her 2008 Urban Aboriginal Guide to Halifax at Dalhousie Art Gallery. Johnson’s guide is a satirical response to the gallery’s exhibition of the watercolour sketches by William Hind, a 19th century British explorer. Hind assessed the landscape and aboriginal peoples of the Labrador Peninsula, creating a guide for British colonizers. Johnson’s guide suggests aboriginal newcomers to Halifax are also strangers in a strange land, directing them to places where they can sleep at night and find traditional food, worship and gatherings. Johnson’s 2003 performance Basket Weaving explored her fear of losing her culture as well. Johnson spent three days weaving a basket around herself. The performance was “a comment about me being new to the city and trying to retain my sense of identity and culture and trying to keep myself in a little cocoon for safety.”

When she returned to Eskasoni, Johnson also returned to basketry with a greater appreciation of her great grandmother’s art and a fresh perspective. “I feel that being away from my community and from people who speak the same language and from elders who I can ask questions to has created this thirst for knowledge,” she says. Today she’s learning to fell her own trees, which requires searching for perfectly smooth and straight white ash and maple trees growing in moist areas and knowing what time of year to harvest each tree. She hints that her next body of work will confront the need to pass on knowledge such as this to a younger generation of Mi’kmaq youth, who unlike her, may have no cultural memory at all.

Lizzy Hill is the editor of Visual Arts News and an arts and culture writer with work in publications such as CBC Arts, Canadian Art, Akimbo and the National Gallery of Canada Magazine.