Canadian history, insofar as its Black history is concerned, is a drama punctuated with disappearing acts. … Black history is treated as a marginal subject. — Dr. Afua Cooper, The Hanging of Angélique

Marginalia are the informal notes written to the side of official texts. They are additions, corrections, interpretations. They are also expressions of ownership. With New Found Lands, curators Pamela Edmonds and Bushra Junaid expertly note an omission in the official texts of Newfoundland. In their exhibition at St. John’s Eastern Edge Gallery (September 9-October 18, 2016), they have reimagined a narrative by magnifying its margins. The attention of the reader shifts and, with that, the story. 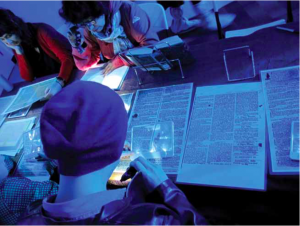 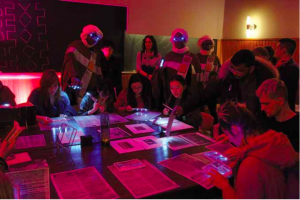 Lineage is key in this province. It is common to situate yourself for others by naming your relations like rings on a tree. This exhibition starts with a portrait of Bushra Junaid’s mother on her wedding day. Junaid, the child of a Nigerian father and Jamaican mother, was born in Montreal and grew up in Newfoundland: “I was blessed to have a wonderful, loving, intelligent mother who laughed with abandon, who told us we were ‘black and comely’ when we were called names …” Later in the exhibition, Sisters shows Junaid and her sister re-enacting a 19th-century image of two plantation workers who have not been given the dignity of names. “I see [the women in the image Two Pretty Girls] as my ancestors,” she writes. “By enlarging the image I give it the immediacy of a family portrait; catapulting these women out of distant history into the present.” By inserting herself, the curator/artist underscores a key point: this exhibition is unabashedly personal.

“From the beaches of the Bahamas, to the cliffs of Newfoundland. From the frigid North Atlantic to the Caribbean sand…” The theme for NTV (Newfoundland Television) is familiar to many on this island, often as background music during the commercial break. Yet few consider the dark and complex connection that exists between the two parts of the world the lines describe. Little has been written linking the Newfoundland cod fishery with the slave trade, and a time when low-grade cod refused by European markets was sent south to feed slaves, just as rum and molasses were sent back to Newfoundland.

This exhibition is the largest gathering of Afro-Caribbean artists in the province’s history. Their individual works and stories become touchstones for larger conversations about bodies as commodity, language as an arsenal and the navigation of boundaries. All the artists have personal ties to Newfoundland and/ or the Caribbean: Angela Baker, Sandra Brewster, Alison Duke, Roxana Farrell, Anique Jordan, Bushra Junaid, Wayne Salmon, Tamara Segura, Anita Singh and Camille Turner.

Works such as Roxanna Farrell’s mixed media installation 600,000 lbs. per weak present the mercantile trades as a metaphor for the movement of people as goods. Other works such as Tamara Segura’s film Song for Cuba show the search for an identity when one is already marked as an ‘Other’ by virtue of a non-White body. In this work, a young Cuban couple is shown to be isolated “on an island in the North Atlantic,” recreating the life they knew in Cuba within an ambiguous, alien situation.

The show explores loss, but it is primarily about remedy. This was immediately evident at the opening reception. It was a coming together, a community creating an active space. The remainder of the weekend was filled with meals, talks, and performances. Among them, Camille Turner’s afrofuturistic performance, Afronautic Research Lab, presented at the A.C. Hunter Library. Afrofuturism is a method of analyzing alienation by embodying disconnection from the past. Turner’s Afronauts, descendants of the Dogon people of Mali, have returned home to save the planet after leaving earth 10,000 years ago. As a recording of a woman’s voice described Newfoundland’s role in the slave trade, two silent figures in futuristic dress invited visitors to look through illuminated magnifying glasses while they examined ads posted by Canadian slave owners in 18th-century newspapers. They contemplated the historical amnesia that exists when a story is told from one perspective.

In Wayne Salmon’s photograph On the Wharf, children swim. Their Black bodies float in a massive ocean punctuated by large ships. The image tilts, mirroring the trajectory of a single boy leaping from the wharf to the water.

Water is a key, poetic image in this exhibition. It is a substance that takes the form of its container, but is never fixed. Existing alongside and between what holds it, it softens edges.

Mireille Eagan is a curator based in St. John’s, Newfoundland and Labrador.