Going there: The playful pain of Neil LaPierre 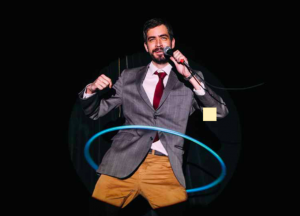 Did you hear the one about the funny performance artist? A few years ago, that may have been the beginning of an actual joke, but these days it serves as an ample introduction to any number of transgressive merrymakers changing the landscape of fine art pageantry. One such artist-comedian is Neil LaPierre, and he’s hilarious. Delving into the personal and surreal, LaPierre is committed to bringing the HA-HA’s into art discourse.

LaPierre’s devotion to droll is evidenced by his status as the only person to perform at every single Doored, the regular performance and comedy showcase at Toronto’s Double Double Land. Founded by Life of a Craphead’s Amy Lam and Jon McCurley, Doored began as an outgrowth of 2012’s now legendary Experimental Comedy Training Camp at the Banff Centre. Back then, the seven-week residency hosted by Michael Portnoy and Ieva Miseviciute set-off a revolutionary realignment of the limits of performance and the place of humour in the otherwise serious milieu. LaPierre, Life of a Craphead, Bridget Moser, the Fake Injury Party collective and others were led through movement sessions and conversations on comedy and art, with appearances by the likes of musician Reggie Watts and curator Mai Abu ElDahab.

LaPierre began his comedic flirtations at NSCAD in the late 2000s. “I did printmaking primarily. Then near the end of my degree I got into performance with Michael Fernandes, my Open Studio mentor,” says LaPierre. Working with the experimental artist, LaPierre developed his voice, and found audience opportunities through Noah Derrick Logan’s Performance Series. “My performances are lot more simple and considered now,” LaPierre reflects, “I had a printmaker’s mentality of repetition. My performances dragged on atere I’d be doing the same things over and over again. Whereas now they’re more about storytelling. But I still have some of the angsty elements from those performances.”

Following his graduation, LaPierre moved to Toronto. “It’s now a great place for comedy, even though there are so many of the typical stand-up comedians who still play on racial tension, sexism and homophobia,” says LaPierre of the new wave of performers pushing unconventional narratives, “Having a circle of peers in my life has been really helpful; a community to talk about work with.”

Building off lessons learned at Training Camp and through his regular Doored routines, LaPierre’s work covers the breadth of love, family issues and pop culture absurdities. In developing this body of work, the artist has had ample opportunity to consider the intersection between performance and humour. “I think art is similar to comedy, except for maybe it doesn’t make you laugh, but maybe it should,” says LaPierre, “I hope that comedy becoming an increasingly accepted part of the art world means it reaches a larger audience. Doing comedy art shows has given me further reach than I’ve had before.”

The momentum of the shift towards comedy is benefiting those outside of the Doored circle, like Halifax-based artist Mitchell Wiebe, a painter whose been delving into the stand-up scene lately. “Whether in painting or stand-up comedy, there is definitely a drive for a distinct nuance,” says Wiebe, “It’s really an approach to language that I find amusing. And perhaps it’s a sensibility that transcends any particular medium.”

LaPierre hasn’t found a formula for on stage success, other than honesty. “I don’t have a way to make people laugh,” he says, “My stuff is just me and my actual thoughts, maybe exaggerated a bit.” Regular turns at the microphone more and more see LaPierre considering brevity. “Being entertaining is a primary concern,” says LaPierre.

With less space for self-indulgence, a concentrated LaPierre has grown beyond the repetition of printmaking to embrace the inspiration of pushing his own boundaries. “Each Doored, I perform something different,” says LaPierre. “I’ve never had anything to fall back on that I know is going to be successful or well received.

I don’t keep rehearsing my sets and trying to perfect them. I’m always trying to do new stuff. It’s more exciting to me.”

This constant boundary pushing is exactly what place LaPierre and his peers in the contemporary art conversation. “The best compliment I can get when I’m on stage is when someone in the audience says, What? That’s exactly what I’m going for, a little bit of confusion. Something that’s specifically unexpected,” LaPierre beams, “If you’re really trying to tell a story, to express something, then that’s funny. It sounds like it’s not, but it is,” says LaPierre.

“As art starts looking at itself, it becomes funnier,” says Wiebe. In the case of Neil LaPeirre his themes of the uncomfortable and unending transition into adulthood has hit a nerve, and that success is helping to cement the place of comedy in fine art.

“It makes me excited about what’s the next big thing after comedy, and I want to be in on that,” LaPierre adds. “I’m kidding!”

Jonathan Rotsztain is a writer, graphic designer and cartoonist, spending the winter on the Toronto Island.