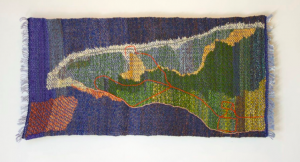 There is something comforting about the art of weaving, perhaps it’s the reminiscence of wrapping up in a cozy blanket, or the softness you can see in the delicate threads bound together. There’s a soft delicacy in the works that comprise Rilla Marshall’s Liminal Project, which makes the realization of its decidedly uncomfortable subject matter all the more jarring and arresting. The inlay woven pieces depict map-like images of Atlantic Canadian coastlines, and the gentle blue and earth-toned strands reveal the troubling realities of erosion and coastal destruction that threaten the way of life—and very existence—of the seaside towns and cities that so many of us, including Marshall herself, call home. 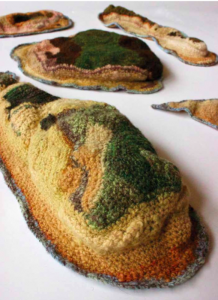 Most of the pieces included in this exhibition point to waterfront erosion in one way or another, but perhaps West Point PEI, 1959-2000 illustrates the phenomenon most starkly. Like the rest of the works in the collection, this piece is derived from Marshall’s exploration and translation of scientific data into woven forms, and lays bare, in its four panels, the noticeable recession and reformation of the tiny province’s vulnerable shoreline. Shades of beige and brown reconfigure a coastline, again and again, and the startling alterations are made painfully clear.

Erosion NB is even more direct in both its title and its urgent, earthy reds and burgundies revealing the previous distance between the current coastline and the coastline of decades prior. Sable Island—a calm blue cloth topped with a nautical compass—reveals another shocking example of loss of land, with pale beige lines of cotton thread-stitched overtop the solid form of the island as it appears today. The delicate lines of the overlay, gleaned from an 18th century map of the island, reveal changes so drastic that nearly every inch of the coastline has receded in some way—the shape of the entire island has completely changed. This Town is Small and Close to the Water employs scientific data in a completely different fashion: to look forward, rather than back. The piece, criss-crossed by the pale blue grid of streets, represents different levels of elevation with different colours, with a shocking red illustrating the parts of the Charlottetown waterfront expected to be below sea level in a hundred years, if waters continue to rise as predicted.

Marshall began work on The Liminal Project in late, 2010, spurred by the pieces she produced for 2009’s Home Terrain, a project “taking statistics about quality of life in the Atlantic provinces, taking those numbers from Statistics Canada, graphing them, and then weaving those graphs to look like landscapes that were reminiscent of landscapes in the Atlantic provinces.” Through this process, Marshall became interested in mapmaking, and gathering data from aerial views of coastlines. Having long considered weaving as analogous to modern computing, especially in their respective reliance on a sort of binary code, exploring information gathered found in scientific studies and on Google Earth through the creation of textiles made perfect sense.

“Just by its very nature, textiles or the textiles that weaving produces, have this very intimate quality to them that I really like— that juxtaposition between taking this data that’s considered kind of cold, hard high tech data, and using weaving as the translation tool to interpret it or to translate it,” says Marshall.

This sense of intimacy is magnified by the choice of locations she weaves, which includes the areas where she grew up, and the national park in Prince Edward Island where she now works. In her role as an interpreter, she guides visitors through the physical landscapes of the park, interpreting its cultural and ecological heritage. Spending three months walking the eleven kilometers of the park’s newest addition, Greenwich Peninsula, every day, Marshall became intimately familiar and acutely aware of the effects of erosion on the most vulnerable part of the most vulnerable province. Exploring the area, comprised almost entirely of sand dunes, she was able to see “first hand, working in the national park, the changes year to year or even week to week of that shoreline of PEI.” The resulting piece, Greenwich Peninsula, PEI, mirrors the delicacy of the landscape in the delicacy of the stitching and numerous layers.

That this exhibition is named for a synonym of threshold is of course no coincidence, but it speaks to more than the transitional physical space of the shoreline. It speaks to our human relationship with that space, and its constant flux. “The shoreline is constantly in a state of transition. It’s never static—it’s never the same,” Marshall explains.

“Thinking of that shoreline space as a kind of a rich poetic metaphor for many other things in life, using mapmaking of these familiar landscapes and shorelines can bring into focus the transitory nature of our relationship to the ocean,” she adds. “Land is not a static thing, just like the ocean’s not a static thing.”

Going there: The playful pain of Neil LaPierre Previous post

Kathleen Higgins is a Toronto-born writer living in Halifax. She’s an arts contributor to The Coast, Halifax’s alternative weekly.