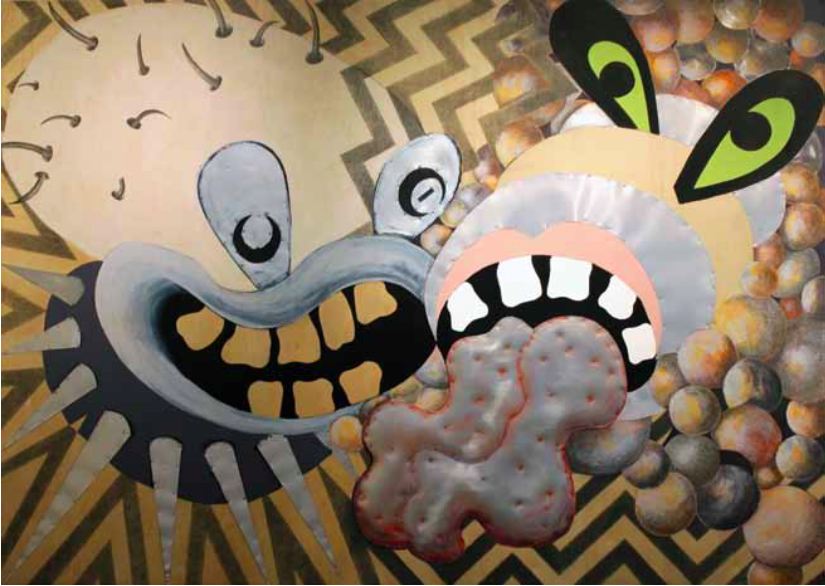 In his latest solo at Studio 21 Fine Art, Richard Mueller continues his playful exploration of what he calls “graphic memes” — motifs drawn from popular visual culture such as action comics and (sometimes lewd) cartoons — deployed on variously surfaced plywood panels. Here are goofy tongues and teeth, Mickey Mouse eyes, stripey sausages and spheres — visual cyphers liberated from their original contexts to become characters in themselves, running rampant over the textured surfaces of the panels and occasionally elevating themselves into star features of more ambitious constructions. The resultant works are energetic, cheeky, and at times disturbing.

The exhibition is titled Eye Witness and sub-titled Drawings on plywood (and was October 9 – November 10, 2015). There are indeed many eyes — disembodied, fluttering like moths, popping over the edges of ambiguous forms, peering quizzically at you, the viewer — and much drawing too, deftly combined with other materials and processes. But what, actually, are these eyes (or ours) witnessing?

Those familiar with Mueller’s work in recent years will recognise his signature use of common materials to structure elegant wall-works that explore the visual syntax of abstraction. He is not so interested in coherent pictorial space or literal depiction as in the potential of formal arrangements to engender associative and emotional responses “independent of literal language” as he puts it (in the accompanying artist’s statement). Figurative motifs are mainly employed to “goose” the reading of the material object — to create and destroy illusion, and to maintain an open-endedness of interpretation. Thus, actual wood surfaces play against painted faux wood-grain; spotted, striped or plaid fabrics blend into drawn imitations of themselves; cross-hatched and shaded volumes adjoin flat metal cut-outs, all keeping the compositions active and the stories provisional. But, increasingly, the graphic memes are being asked to carry an emotional charge that ups the ante, as it were, in Mueller’s stated aim of avoiding fixed literal narratives. The risks and rewards are evident in his latest and largest pieces. 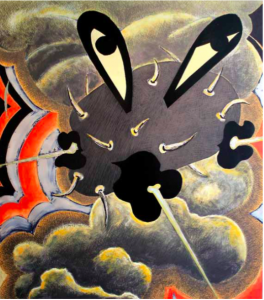 In the panel titled Spit, cartoon cloud and sky forms vaguely suggest a baroque ceiling — but there are no chubby cherubs or rays of heavenly light here. Instead, the clouds are parted by a grotesque assemblage of spiky bristles, frowning eyes and pursed lips, spitting. It is at once hilarious and threatening — Looney Tunes meets Tiepolo, perhaps? Mueller comments (in conversation) that in Spit  he was seeking to evoke a feeling of disgust — of outrage, even — but not to link it to the specific experience or social situation that might have prompted it.

A similar motivating outrage may be sensed in the most ambitious and, at five by seven feet, the largest work in the exhibition: a dramatic collision of forms and surfaces titled Left on Liberty. Here the elements build a ghoulish character, sporting a spiked metal collar and a mouthful of comical teeth, leering at a frightened-looking creature with wide green eyes and an extraordinary flapping tongue (constructed, fascinatingly, out of sheet metal, pillowed and quilted with nails). The composition resonates aggression and anxiety — but can the carefully crafted visual elements prompt a broader range of interpretive possibilities than the obvious? Will we notice that the spiky collar, when inverted, curiously resembles the crown of the statue of Liberty, or take the time to ponder what the panel’s title might suggest? This is tricky stuff to bring off when the very memes that the artist subverts are culled from the cruder and more superficial aspects of vernacular culture, and when audiences generally prefer things to be spelled out. Mueller succeeds insofar as he persuades us to ride the emotional punch into a deeper engagement with the mechanisms of depiction and expression. In that case, those quizzical eyes may well be onto something. Wink, wink.

Going there: The playful pain of Neil LaPierre Next post