From the Archives: Shary Boyle’s voice in the dark 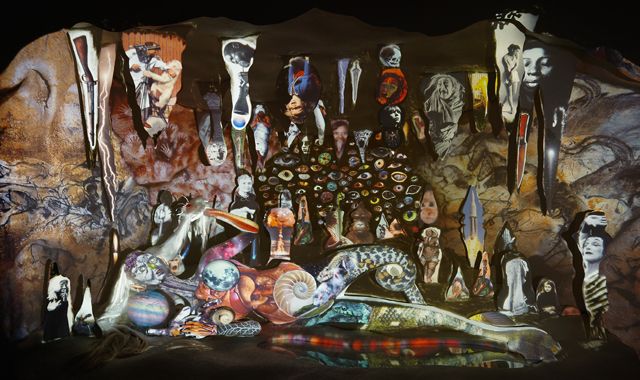 There are no cars in Venice. It makes for a strange silence, one that affords an ongoing clatter of voices, birds and the bells that ring every hour. In the midst of previews at the Venice Biennale, the city seems an uncanny counterpart to an all-encompassing fever dream. At the Giardini one tangos around impeccably dressed “art heads,” business cards in hand. Line ups for the pavilions wrap around the gardens, punctuated by clouds of cigarette smoke. And there are parties—crazy parties—every night, every afternoon, everywhere. Meander through the city, and one will inevitably discover an installation or performance that will deeply alter how one encounters the next part of the walk. But enter through the doors of Shary Boyle’s Music for Silence at the Canadian Pavilion and the cacophony disappears; it is a jolt of quiet.

“When creating Music for Silence I was inspired by the idea of the Universal, the power and insignificance of the individual, and how that relates to the idea of ‘voice,” recalls Boyle. “The strange audio-sensory experience of Venice … contributed to my thinking around sound, music, silence.” 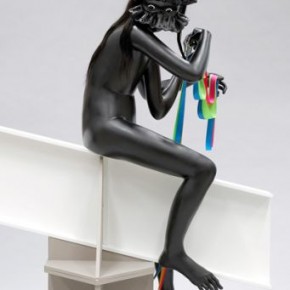 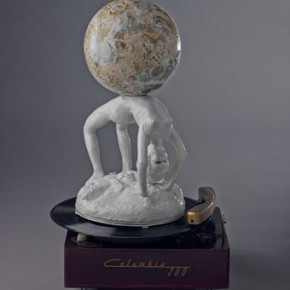 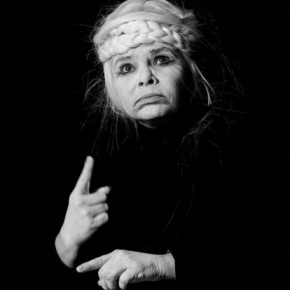 Outside, a dark, cast-bronze figure of a child sits on top of the tipi-style building, weaving a maypole—simultaneously inviting and menacing. Inside, Boyle has transformed the space into a darkened cave, its walls covered in gems reminiscent of constellations, its floor soft. Two small porcelain sculptures—spotlit and unprotected—

rotate on vintage record players. Each carries a large orb, one in a net upon its back and the other on its stomach, as the figure contorts into a bridge pose. One encounters the projection of an old woman overhead, whose fingers sign without  subtitles—a language for the initiated. At first it may seem like a warning, but she is a guide,signing the intention of the exhibit: for those who are silenced; for those never born; for the ugly; for those who can’t run fast; for that which we see in our dreams; and for the deepest parts of the sea, where we go when we orgasm. It is a dedication to half-hidden intuitions, to the knowledge layered upon words.

Deeper in, a large sculpture of a crone/maiden reclines in a cave. Suckling a baby, her wizened face regards the viewer, one leg twisting like the interior of a shell. The light changes every few seconds: front lit and pure white, back lit in blue, and then a noise of images that covers the cave walls in a bright organic collage.

Boyle’s strength of drawing upon site specificity serves her well in Venice. Tucked away to the side of the grandiose British Pavilion, the Canadian Pavilion’s small footprint and curved walls are often considered problematic, a layout further complicated by a tree in the middle of its floor. Boyle was inspired by the building’s design, employing its self-consciously natural architecture to create a highly feminine and phenomenal encounter. Known for her gently grotesque porcelain sculptures that portray mythological narratives, she also delves into immersive installations, using drawn or collaged projections to alter the experience of a space. Music for Silence is a highly considered continuation of her aesthetic.

Her exhibition is also an elegant contribution to the overall conversation of the Biennale itself, whose central thematic emphasizes eccentricities, outsider perspectives and the various forms of the imaginary. Titled The Encyclopedic Palace, Biennale curator Massimiliano Gioni draws from the Italian-American folk artist Maurino Auriti’s proposal in the 1950s to create a structure capable of holding the entire world’s knowledge. As Gioni describes in a press statement for the Venice Biennale: “Auriti’s plan was never carried out, of course, but the dream of universal, all-embracing knowledge crops up throughout history, as one that eccentrics like Auriti share with many other artists, writers, scientists, and prophets who have tried—often in vain—to fashion an image of the world that will capture its infinite variety and richness.” With Music for Silence, Shary Boyle deftly navigates a middle ground between the transcendent and the visceral.

For Boyle, the correlation “was a wonderful surprise, as my exhibition had been fully planned before Gioni released his statement. Music for Silence is a natural step forward within the trajectory of my own thematic and material interest; it was heartening to have such a young and canny international curator share so many of my personal concerns.”

“My work rarely employs the same language used by my peers in contemporary art. This can cause a blank or superficial reading by those not willing or able to interpret outside the current discourse,” adds Boyle. “The astonishing research and selection of artworks by Gioni in the Encyclopedic Palace reflected sensibilities directly parallel to my own artistic interests: the healing, spiritual, narrative, humane, figurative, hand-made, the emotional visionaries.”

Much like Venice itself, Boyle’s work is a suspended, somewhat precarious reality where old worlds meld with contemporary: “The city is ancient, and in its architecture and history combines mythologies of both East and West … Venice was a crossroads where treasures of the world were exchanged or plundered. In this way it is beyond uni-cultural, it reminds one of a broader past and shared humanity,” says Boyle. “The magnificent ideals of Art and God are always paid for by someone’s misfortune, some other’s painful reality. The underwater-subconscious dreamlike nature of the place also supports this essential idea. It is invented, impossible, mysterious, decaying.”

On my last day, I visited the old galleries and halls scattered across the historic city. Threads of Boyle’s art were everywhere: in Tiepolo’s baby drinking from a mother’s corpse, in Bosch’s macabre altar pieces, in the gilded Mother Mary. I found myself wandering down several twisting stairways into a series of courtyards near the Piazzo San Marco. Ancient sculptures were stored in every side alley, moss-covered and exposed. Although I could hear crowds somewhere, over there, I was alone, left—like Boyle—to contemplate the impossible beauty of this surreal city that crumbles silently into the water.

From the archives: Mathieu Léger transforms cultural detritus Next post

Mireille Eagan is a curator and art historian living in St. John’s, NL.