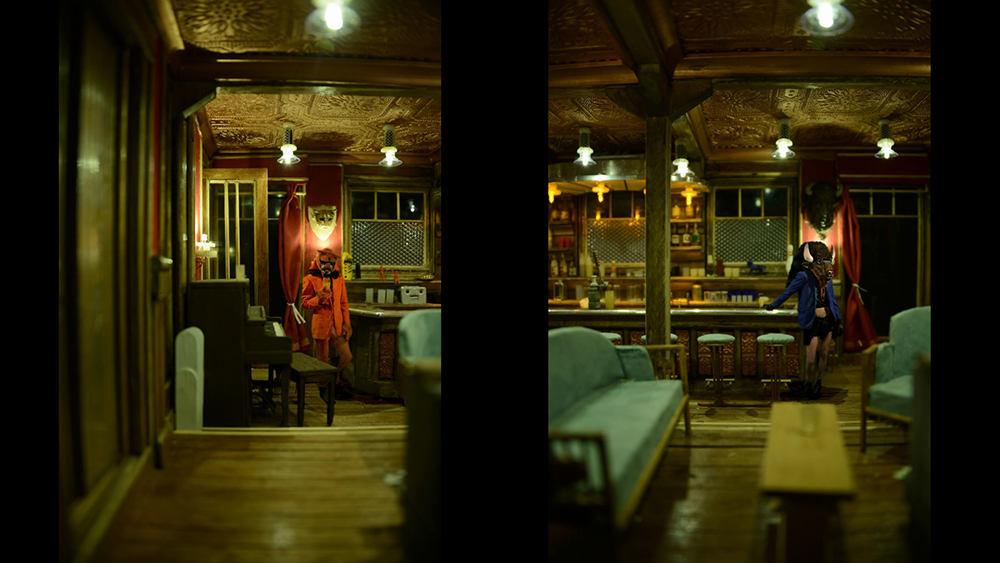 Enter into the imaginary world of Graeme Patterson’s Secret Citadel where memory, invention, and fantasy collide to provoke a multifaceted narrative of childhood friendship, rights of passage and adult isolation. Conveying a much more personal psychology than the social resonance of his iconic Woodrow (2007)—a multimedia installation inspired by his family’s Saskatchewan homestead—Patterson’s Secret Citadel reveals the breadth of his creativity and the complexity of his imagination. It is an ambitious exhibition that integrates sculpture, animation, robotics, music and video projections with humour, insight and melancholy.

Patterson admits the subjective nature of this work as an incarnation of his memories and imaginings of a lost childhood friendship and male friendships in general; and he chooses two animal avatars, a sprightly blue bison as himself and an energetic orange cougar as his childhood friend Yuki to guide our way through his tale. The transmutable nature of these avatars invites the viewer to imagine or remember our own childhood adventures and turning points as we assume the role of one or the other of the characters.

Although natural enemies in the wild, this unlikely pair form the binding link between the four sculptures, which allude to four pivotal scenes in their relationship. The bison and cougar appear in various incarnations throughout, from lifeless costume hides suspended mid-air to bouncing animated video projections. These two characters begin as whimsical compatriots and end as somewhat maudlin loners; their transformation underscores the vagaries of a life and implies a rather pessimistic depiction of growing up and becoming an adult.

Patterson’s trademark model making skills are as fastidious in their detail as his earlier work, but there is a noticeable difference in their materiality and tone. Almost a boyish creativity is evident in paperclip hinges, toothpick furniture and blanket fort mountains, which evoke childhood and adolescent pastimes. Except for in his Player Piano Waltz (2013), which retains a detached coolness and finesse. Not surprisingly, Player Piano Waltz references the last scene, where the bison and cougar are solitary adults wandering aimlessly through the rooms of a fading gentleman’s club. 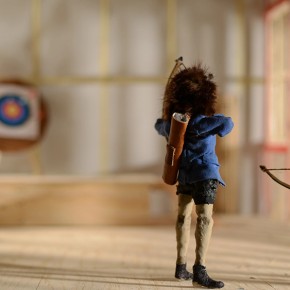 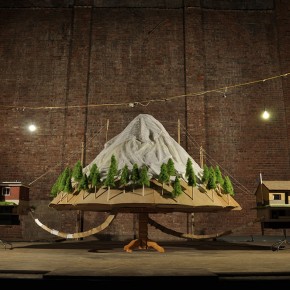 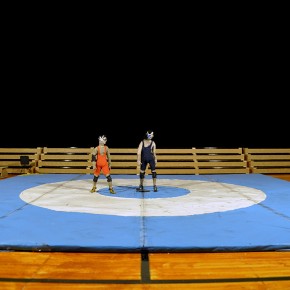 Once again as in Woodrow, the model is meticulously constructed and void of any three dimensional characters within the space itself. Instead the set integrates the narrative through looped animated projections viewed through the external windowed walls of the club. The viewer is held at bay, unless a coin is dropped into the pay box to initiate the musical score of the player piano, which serves as the base for the sculpture. Patterson also wrote the lilting music reminiscent of early Tom Waits.

In the three other sculptures, Patterson moves away from the self-contained voyeuristic miniature style of Woodrow towards a more openly inviting physicality of space. Grudge Match (2013) allows viewers to choose a team and sit on their side of wooden gymnasium bleachers to watch the animated high school wrestling match projected onto the wall. Patterson’s style of stop-motion animation integrates detailed homemade puppets and sets with sophisticated digital projections to create a quirky hybrid throw back to 1960s cartoons like Davey and Goliath or the Thunderbirds.

The gymnasium stage for the animated wrestling match sits under and behind the bleachers, and includes two drawer-like attachments of a locker room and washroom alongside a weight room and coach’s office. It almost feels like a giant Barbie palace for boys that could be folded up and set up in your bedroom. Despite the playful elements, competition is the focus of this high school match, where potential alpha status is declared and clique alignments develop. Grudge Match severs the common bond of imaginative play and adventure evident in The Mountain (2013) and Camp Wakonda (2013).

Camp Wakonda (2013) is a haunting installation featuring two charred bunk beds as the platform for a reconstructed summer camp and vehicular accident. It links the structured independence of camp with the freedom of a driver’s license as complex rites of passage. Each rite carries its own inherent danger, but is an essential step in personal character development. Manly adult skills such as archery and wood chopping are practiced and tested in projected animations onto the top bunks’ replicas of the open framed camp buildings—while the lower bunks’ projections find our protagonists locked in a battle within, as the civilized avatar fights off its wild counterpart. It is a layered and complicated narrative that culminates in the final collision between childhood and adolescence portrayed in the flaming accident between school bus and family sedan. 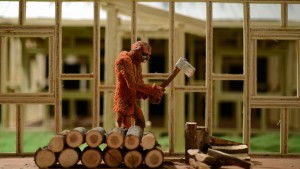 The story begins, however, with The Mountain (2012), a massive sculptural installation with a white blanket covered mountain cloaking the ideal artist’s studio within. Two suburban family homes straddle either side of mountain linked by telephone poles that stretch over the top of the mountain and a secret passage tunnel that runs underneath the dining room table base. One house has its furniture neatly stacked outside indicating either a move in or out of the neighbourhood, simultaneously bringing the friends together and tearing them apart. The mountain’s physical inference to a blanket fort with imagined secret passageways connects the imaginative play of childhood to the imaginative play of an artist. It’s possible to envision the young buffalo and cougar running over to share their latest comics and practice their super hero moves.

Patterson seamlessly relates these childhood pastimes to his secret artist’s studio deep within the mountain, which evidently refers to Superman’s “Secret Citadel”—the earliest comic book version of his “Fortress of Solitude”—where Superman would go to contemplate and rejuvenate after saving the world. Of all the sculptural works, The Mountain is the most joyful, perhaps because it reflects the artist’s studio practice. A practice that is connected to the creative abandon of childhood rather than the dismal boredom of a gentleman’s club.

Interspersed between these four works are wall projections that fill out the narrative of the bison and cougar. Patterson includes an array of technical styles. Some are live action models dressed in the bison or cougar costumes, and others involve his puppetry. All are relatively short loops that can be caught between viewing the sculptures to add another layer of insight and detail. But one must not miss the Secret Citadel (2013), a thirty-minute stop motion animation that tells the unabridged story of bison and cougar, and showcases Patterson’s considerable animation skills. It’s a visual and aural delight. Patterson is an artist with a substantial range of technical accomplishment, but he seems to hold animation with a particular affection.

After watching Secret Citadel, the rest of the exhibition shifted context. Initially, the sculptures stood independently as sculptures, yet afterwards they evolved into elaborate sets for the animation. Not that one category holds more value; rather one reveals a lingering childhood fascination with Saturday mornings.

A measure of disorder: Seripop's exploration of entropy Previous post

From the Archives: Shary Boyle's voice in the dark Next post

Audrey Nicoll is a visual artist, art educator and writer based in Nova Scotia.