A measure of disorder: Seripop’s exploration of entropy 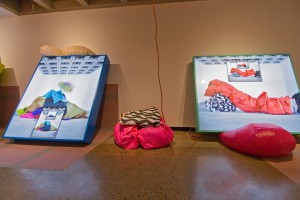 Though some mark 50th anniversaries with gold, Séripop’s The Face Stayed East, the Mouth Went West marks the 50th anniversary of Charlottetown’s Confederation Centre by opening with more striking elements.

Interested in exploring entropy in bright colours and on a grand scale, Séripop—who are Montreal-based duo Chloe Lum and Yannick Desranleau—inject a measure of disorder into the glassed-in exhibition room that serves as a subterranean entrance to the Confederation Centre Art Gallery.

While I was visiting, another gallery visitor asked, “Can I walk through this?” It’s a fair question, as the installation appears at first blush as a tangled and unfurling construction zone made up of a giddy and gaudy palette reflecting pop and mod aesthetics that appropriately recall 1964, the Centre’s inaugural year. A cartoonishly oversized and bent styrofoam dumbbell greets new arrivals, sitting in front of swathes of Tyvek, rope, and vinyl tarpaulin draped over scaffolding stretching nearly the full length of the gallery room. 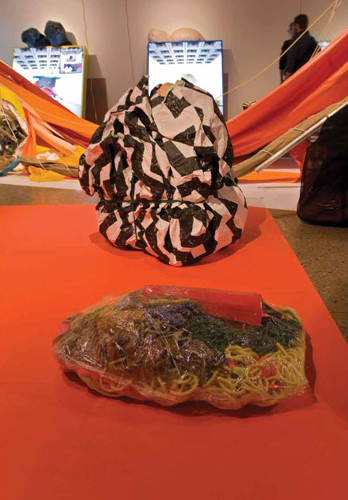 Three lightboxes propped up by beanbag chairs—one hot pink and protruding tongue-like from under the lightbox’s weight—display overlaid theatrical scenes in which the players are packages of wrapped materials falling into place in a Photoshop-reimagined version of the Centre’s gallery rooms. The extension cords that power the lightboxes—intentionally bright orange—hang loose as further interventions into the pedestrian traffic lanes.

Desranleau and Lum conducted in-depth research about the
building in Montreal at the Canadian Centre for Architecture, whose archives house the storied history of the Confederation Centre’s genesis from its designers’ initial modernist hope for a Brutalist building that was “complete unto itself,” says Wendt, to a lawsuit that developed with an allegedly incompetent construction company, eventually resulting in the architecture firm pulling out of the project completely. The building’s use has veered from its architect’s original vision of concrete perfection to one that has come to include gardens and marble, among many other unforeseen features. Séripop comment on the building’s history with an installation that parallels the pop-influenced installation aesthetics of artists like Jessica Stockholder and Davis Rhodes.

Desranleau explains the duo work with “flexible, friable” materials, using “actions like scattering, instability, and weathering.” He says, “Usually, the more flexible the
material we play with, the harder it will be to plan its reactions, whatever the conditions are.”

Lum and Desranleau are formerly of the avant-garde noiserock band AIDS Wolf, and earned their stripes plastering Montreal in show posters in the face of anti-postering bylaws, eventually expanding to larger outdoor installations. Desranleau says, “Our departure as installation artists came from what we felt was a critique of institutional control of that space, although in a very oblique way.”

Séripop’s Confederation Centre installation playfully critiques the surprising amount of change that has gone on within the Centre’s bulky fortress-like walls.

“Our installation in the entrance gallery wants to evoke this notion of history that gets recorded within the materials, and is meant to be a reference to the evolution of the material aspect of the centre itself,” says Desranleau. “By putting these objects in action,
documenting them, and then re-configuring them again within the installation, we were re-enacting a similar narrative to the one the material of the building has lived in the past 50 years.”

Despite some imperfections now showing in its concrete, one hopes the Confederation Centre’s level of entropy will stay well on the safer side of chaos in its next 50 years. But in a Centre whose theatre mainstay ends on the hopeful line “Anne of Green Gables, never change,” Séripop’s work is a timely reminder to Prince Edward Islanders that things are always in a state of flux and change is the only constant.

Christian Ledwell is a journalist and musician from Prince Edward Island. @caledwell