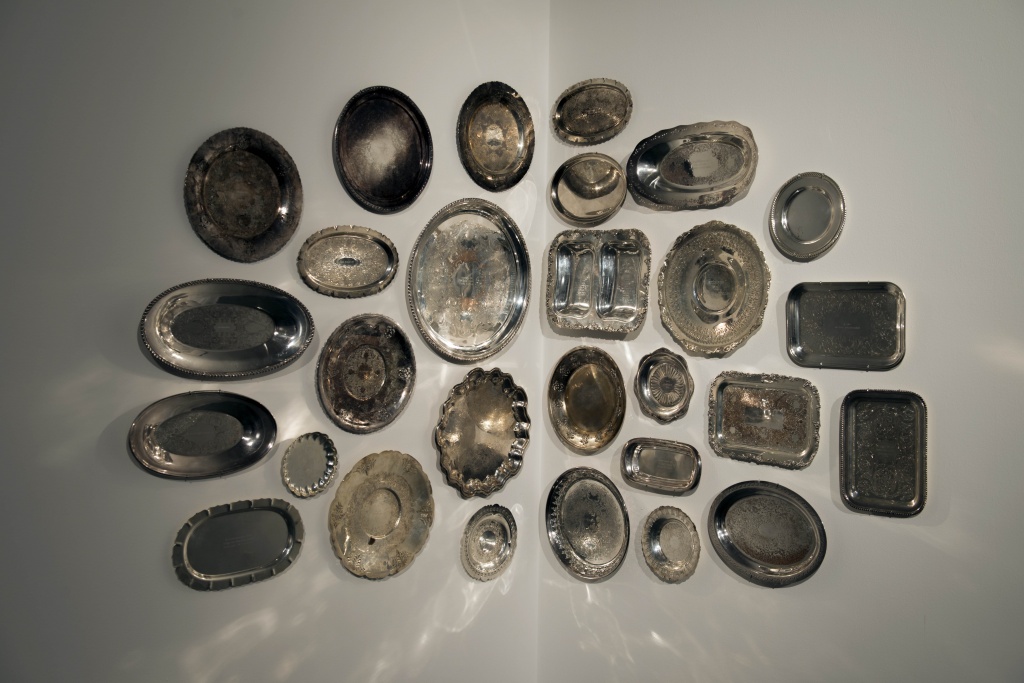 In Acadian author France Daigle’s 2012 novel Pour sûr, Antoinette opens a game of Scrabble against her husband, The Cripple, with a controversial 125 points. Her word, dialyse, she argued, to her husband’s chagrin, contained two vertical words—“y” and “a.”

“It wasn’t the 21 points that bothered The Cripple,” writes Daigle, “it was the principle of the thing.” While The Cripple and Antoinette play—mixing French and Acadian words—they discuss a local murder, Oedipus and psychoanalysis. The domestic scene encapsulates Daigle’s project, exploring the concept of value/values through the lens of contemporary Acadie.

It’s within this milieu that we can situate Acadian artist Mathieu Léger’s exhibition Sur un plateau d’argent / On a Silver Platter (Galerie Sans Nom, Moncton, April 25 to May 30, 2014). The show was composed of second-hand silver plates engraved with texts that, as guest curator Jennifer Bélanger explains in her curatorial statement, “address the impacts on the ever-changing geographic Acadian landscape … reference storied genealogy” and “… directly illustrate the impact on the inherited Chiac dialect.” A few examples: “best déportation ever;” “tu m’corriges en-an-on;” “fricot.”

The concept, like the engraved text, is a one-liner. The castoff silver plates, as “cultural detritus” of British aristocracy, are reappropriated by Léger using the culture the British sought to destroy.

This is Léger at his most digestible, serving the concept “on a silver platter.” An overview of his oeuvre, though, reveals the work to be more than ironic revenge. Recently, he’s been preoccupied by abstract narratives. A stretch of slush-soiled snow (Demography of Virulence, 2012) says more than what’s depicted—the speed of the plow, the placement of streetlamps and muddiness of slush, etc. His ongoing drawing series, Transects, riff on how “scientific concepts can be analyzed through mark-making.” In another photograph series, he describes aerial shots of trees: “When things get overlooked, other things become apparent.”

Frequently working with photography, the aphorisms populating his blog explain his predilection: “Sometimes things seem off, because they are”; “Similar is not always same”; and “Perspective renders different opinions of one line.”

Given the abstruseness of his oeuvre, the straightforwardness of Sur un plateau d’argent / On a Silver Platter is intentional and requisite. The show was immaculately installed and lit, eliminating the chance of aloof viewing. Léger drew you in, seduced by silver.

Adroit, he had complete control, preying on viewing sensibilities, which sees the focus placed on the engraved text, on his orientation of the pieces.

What we don’t admire is the plate itself. This neglect addresses notions of value and values in the relationship between idea and object. In this case, the idea is nothing without the object. The object, however, as “cultural detritus,” has no value, and, arguably, isn’t the object once it becomes vehicle for the idea.

Yet, we value the “art,” not the plates. This is our error, and reveals our value system as stagnant. In discussing his work with Canadian Art, Léger said, “I’m questioning every aspect of artmaking and the art world, and the place of art within culture. And the place of culture within society.” Why should his decision to engrave the plates, and arrange them in a display, engender value?

To recall Nietzsche, the great critic of morality, objectifying value, or prescribing value to an action, out of custom was “dishonest, cowardly, lazy!” Values should be determined in context, informed by “the acquisition of new experiences and the correction of customs.”

We engage art staidly—stupidly, if you consult Nietzsche—with customary values, and the values of fame and fortune, inhibiting the creation of new customs. As such, contemporary art may be invaluable to distill our zeitgeist; it’s rendered popularly irrelevant.

So what of Daigle and Léger’s interest in values? Acadian culture in both instances is posited as a potential touchstone, one of play, value-bending, miscommunication and bastardized tradition.

The cultural confusion of Acadie fosters a context for new customs, as R.B. Kitaj outlined in the First Diasporist Manifesto: ”If a people is dispersed, hurt, hounded, uneasy, their pariah condition confounds expectation in profound and complex ways.”

This is invoked in two pieces in Léger’s show, one reading “assimilable,” the other “assimilable.” This is the perspective Léger desires. Rather than point- counterpoint, the strikethrough creates a new value premised on the past. It’s an edit, an engagement—not erasure. It confounds expectation, being similar to its opposition.

Similar isn’t always the same, because it’s tinctured by history, cultural provenance, context. Engaging with his cultural context, Léger visions new values to provoke us to see if we’ll do the same. But we don’t. Sur un plateau d’argent / On a Silver Platter is a perfectly palatable contemporary art, and Léger wants us to choke on it.

From the Archives: Shary Boyle's voice in the dark Previous post

From the archives: In bed with Carl Stewart Next post

Mike Landry is an arts and culture writer and an editor at the Telegraph-Journal in Saint John, NB.