From the archives: In bed with Carl Stewart 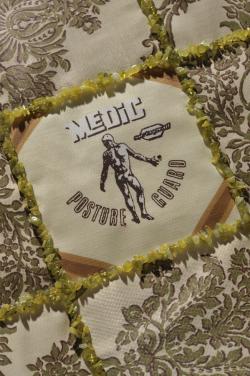 For many Haligonians living in a city full of students and other transient young people at a time of widespread bedbug fear, the sight of used mattresses may arouse disgust or serve as a reminder it’s end-of-the-school-year time again. For Carl Stewart, each mattress isn’t merely bedding, but a source of fabrics, often strange and wonderful. The Ottawa textile artist’s work has frequently focused on queer identity, but in his Halifax show at Eyelevel Gallery of two-dimensional wall hangings and quilts made from fabrics salvaged off curbside mattresses, fragments (May 13-June 16, 2011), he looks at what happens to the bedding we sleep on after we discard it.

Born in PEI, Stewart started his post secondary studies at the University of Prince Edward Island before falling in with the weaving department at Charlottetown’s Holland College School of Visual Arts. After taking a tour, Stewart immediately picked up an application and dropped out of university. “Best decision I ever made,” Stewart says. He had never done “anything like” weaving prior to starting the program. The program largely focused on what Stewart calls “production weaving,” which was targeted at the tourism industry and involved making place mats and tablecloths. Stewart quickly found himself focused on “art weaving,” working on figurative pieces with male nudes.

The mattress series took root in 1996, as Stewart noticed the discarded mattresses and box springs lining the streets on his walk to work. As a textile artist—a broke one, with little money for materials—he was struck by the variety in coverings on the mattresses.

“I was really surprised by how beautiful some of the fabrics were, these satins and brocades and really wacky prints,” he says. He started clipping small swatches that eventually became larger until “I was literally skinning whole mattresses.”

He first presented the work in 1998, when he was still stitching together small bits of mattress. Stewart’s pieces have grown since then — the bulk of the work in the eyelevel show is 18”x18” fabric samples, decorated with rhinestones, beads, embroidering and paint. Other pieces are more collage like quilts of mattress swatches.

For his Halifax show, Stewart traveled to the city months before the exhibition to collect mattress samples and used fabrics from both Halifax and Ottawa in the show. He did the same for a 2005 Toronto show and also clipped labels from mattresses on a London visit. “I see this as this sort of unwitting collaboration between the people in Ottawa and the people in Halifax, where the fabrics come together,” he says.

Stewart chooses mattresses “for their patterns, for their stains, sometimes for where they are.” He’s interested in the stories behind fabrics from certain places, often comparing those from rooming houses with those from affluent neighbourhoods.

“We have this whole idea of what is clean and what’s not,” he says. He notices patterns within the mattress styles, different eras, the abundance of low-end mattress designs and the variations on the term “chiro” in mattress brand names. In one of his favourites, a bright pink pattern, a couple in eighteenth century attire court in a garden and a rhinestone-eyed owl watches over them. “It’s this total eighteenth-century toile, but it’s on a mattress that was made in the ’60s. I just find it really kooky.” Others have garish vinyl-coated 1960s flower patterns, rocket ships and old-fashioned illustration recalling nineteenth century catalogues.

Asked about connections between the series and his other work, Stewart says the cue is in the show’s title, fragments—the bits and pieces that create a narrative. “It’s increasingly a common thread in all my work,” he says. “All we know is the address (and the objects)—we don’t know anything about the people.” Or, as he puts it more succinctly, “Who else but a fag is gonna sew on stinky old mattress fabric?”

Stewart doesn’t clean his fabric samples and sometimes picks pieces especially for the stains, but he started putting samples in the freezer in the past few years out of concern over bedbugs, and he tries to be vigilant about what he picks up. Though he began the project for the fabric, Stewart reads deeper into the themes the mattresses bring up.

“There’s all kinds of things that come into play. There’s class, there’s the socioeconomic thing … there’s the relationship to the body,” he says. “You see something lying there, and if you see someone taking it away, I think a lot of people get this weird little shiver down their spines, like, ugh, I could never sleep on that … I think that people have a really visceral reaction to the work sometimes.”