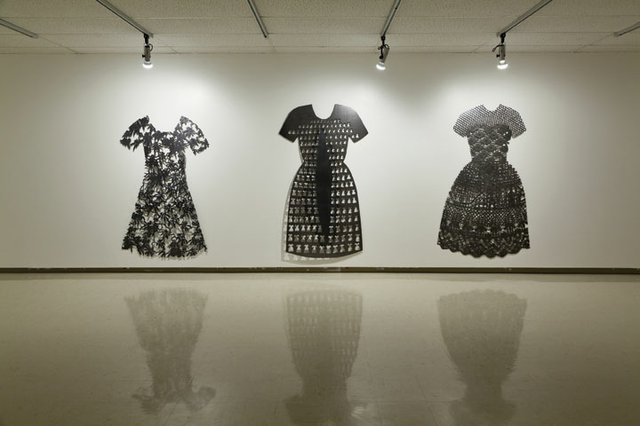 Mention paper dolls to nearly any North American woman and the response is a soft “Oh, I loved my paper dolls.” While huge numbers of little girls spend hours happily re-inventing themselves through playing with their dolls, in later life, the notion of “paper doll” goes sour. Taking her cue from a line in “Tulips,” a poem by Sylvia Plath—“And I see myself, flat, ridiculous, a cut-paper shadow…”—curator and Mount Allison professor Anne Koval assembled a range of contemporary artists’ responses to the cut-out to explore the shadows that paper dolls cast forward into adulthood in her exhibition Paper Doll (September 16 to November 6, 2011, Owens Art Gallery, Sackville, NB).

After discovering that Plath made her own paper dolls and invented scenarios for them, carefully described in her journals, Koval arranged to borrow a collection of them for exhibition from the University of Indiana. The dolls represent attractive women with glamourous, sexy wardrobes with jewel-like colours and details. Made when Plath was 12 or 13, they evoke a magic, miniature, idealized world of childhood play and provide a window into Plath’s sense of imaginative agency before her attacks of depression.

Today, Lynn Yamamoto’s “Silhouettes” (1998- 2011) make visible Plath’s line of poetry through chains of hundreds of uniform, faceless, ephemeral figures cut from translucent white silk tissue paper and peppered with minute holes, burned in with incense sticks. Held out from the wall on steel sewing pins, they capture a passage from childhood magic to later feelings of loss and emptiness.

With more humour, Cindy Sherman’s animated doll (“Doll Clothes,” 1975) updates Duchamp’s “Nude Descending a Staircase,” stepping out of her plastic sleeve in a paper doll book to strike a series of overlapping poses. A pair of human hands interrupts her play at trying on outfits and returns her to her prescribed, slotted space.

In contrast, other exhibiting artists develop more nuanced positions based on the cut-out that re-claim and celebrate feminine identity. Cybèle Young celebrates her pleasure in the cut/fold/play of miniature paper dresses while wryly acknowledging the confining constructedness of post-war North American femininity. In pristine white shadow boxes, she juxtaposes exquisite miniature paper dresses with evocative partners such as jellyfish and scaffolds, all made from fine Japanese paper. One exhibits Young’s delight in the critical potential of her paper doll imagery: curled sheets rise aloft from a tiny curling iron to coalesce into a whirling orange radiance.

In a further critique of dismissing feminine floral ornament as merely decorative, Jeannie Thib’s wall relief, “Double” (2011), takes its motif from a historic tile pattern found in Barthète, France. Cut from thin plywood, panels composing the repeating pattern are hinged together, so that the relief transforms into a flexible, three-dimensional shape-changer that plays with unexpected shadows on the wall. While eschewing the doll image, “Double” exploits the cut/fold/play procedures of paper dolls to imagine structural flexibility based on decorative beauty.

Anna Torma explores with delight the “back-story” of paper dolls in the most feminine medium of silk embroidery. Transforming embroidery into a drawing practice, she creates a sensuous garden driven by desire. The first large panel of “Vanitas I & II” (2011) overflows with fanciful paper doll-like clothes and posing models. Close inspection reveals small figures in the throes of lust, surrounded by swarms of tiny transforming creatures. The teeming fecundity is countered by the second panel, bearing a nearly life-sized embroidered figure of the flayed man of medical drawings, who re-figures the consequences of time passing that no art can arrest.

With “Revel” (2011), Ed Pien revels in the cut/fold/play of cut-outs in a large, spiral installation of clear mylar suspended from the ceiling, enriched by a projection of itself doubling its shadows on the wall. Viewers follow a path between barely visible mylar walls, populated by mysterious cut-out figures crouching among branches. At the centre of the maze is a random web of mylar line entangled with miniature houses, also cut and folded from clear mylar. Bricks remaining from the gallery’s construction anchor the web to the floor. The entire rear wall of the exhibition space is covered by a haunting video projected through the installation and its shadows. The video shows Pien’s female assistant playfully fastening the little houses in the web. The video of the installation shot through itself caught light refracted through the houses, so that some in the projection shimmer in delicate spectral colours.

It is pure magic and completes an argument made by the exhibition as a whole for the feminine cut/fold/play world of paper dolls and ornament as creative ground for re-thinking relationships among ourselves and with our built and natural environments.

From the archives: In bed with Carl Stewart Previous post

From the archives: Susan Wood's Earth Skins Next post