From Melbourne to the Bay of Fundy

A conversation with James Geurts 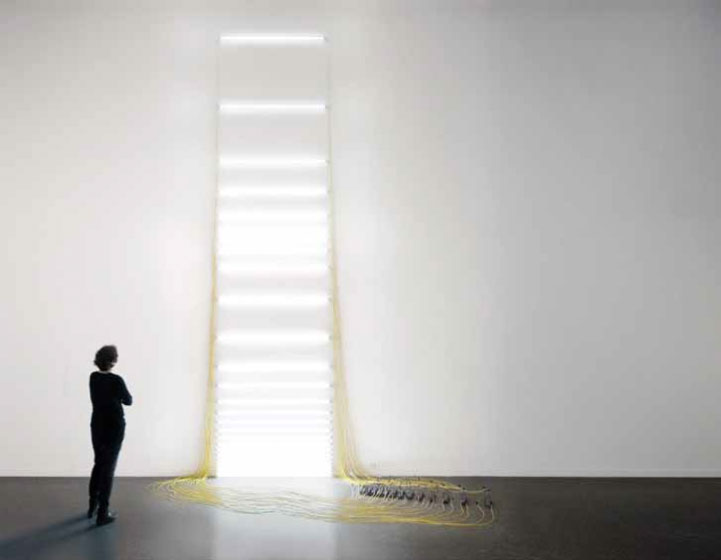 James Geurts isn’t your typical landscape artist. Living, creating and surfing in Melbourne, Australia, it’s no wonder he’s developed an affinity for the great outdoors. Though for Geurts, it’s not just about capturing a particular natural phenomenon, but rather engaging with the landscape and letting his perception of the experience, along with his internal compass, lead the work where it needs to go. Making landscape art since the early ‘90s Geurts has beaten a path all over the world, exploring the equator, horizons, tidal zones and other conceptual lines using drawing, photography, video and light installation.

An attraction to the baffling Bay of Fundy was a natural one, coming to fruition this past summer when Geurts spent six weeks in Nova Scotia, working on three pieces for Dalhousie Art Gallery’s Place Markers: Mapping Locations and Probing Boundaries and digging through old scuba diving footage as an artist in residence at Halifax’s Centre for Art Tapes. Geurts and I talked at length about his fascination with landscape, the methods behind his work and past and future projects.

ALLISON SAUNDERS: Do you think your interest in conceptual lines came from being a surfer?

JAMES GEURTS: I relate being a surfer to being in landscape. Traditionally land art is based in the landscape—there is no historic art reference that talks about oceanic practice, so I refer to my experience in the ocean as part of the landscape, in a land art context.

My first conceptual drawing work was when I decided to follow the edge of Australia’s continental parameter and experiment with developing a vocabulary with the sort of sensitivity that evolves out of moving with the tides. I was interested in how you change the rhythm of your day depending on the tides and the weather conditions. I was interested in the fact that you’re on an island and this constantly pulsating edge creates another sense of temporality, as it appears and disappears, exposing the instability of something that we may perceive as being finite.

We relate to a lot of things on a human time scale, so I was interested in looking at other time scales in geography that might extend that view, and in putting myself in places to listen and experiment onsite with installation or photography, video or drawing practices. I was exploring media that would then reference what I was experiencing. The methodologies were developed directly on site with distinct features of the space—phenomena—and things that caught my attention, and then I’d work directly from that.

AS: And so, how did you apply these methodologies to your work inspired by the Bay of Fundy for Dalhousie’s ‘Place Markers’ exhibition?

JG: I wanted to work with the Bay of Fundy because it has a unique tidal resonance where both the actual amount of water that moves in and out of the Bay, and the time that it takes for each of the phases, are equal. This harmonic resonance is a rare planetary occurrence, a very particular phenomenon.

I wanted to spend time with these qualities and explore the ways that they come together to create a unique sense of flux. I didn’t actually know how the light installation was going to form fully in the gallery, and Peter [Dykhuis], who invited me to make a new work three or four weeks before the opening, was very open to its evolving form.

The light installation that I ended up making, Drawing Tidal Continuum #10, was based on a means of measuring the phenomena of these tidal movements and forces in nature. It explored the ways in which we try to fathom such movement in landscape. I devised an abstract drawing—a form of sculptural drawing in fact—using fluorescent lights. The slowly pulsing light waves—barely visible to the eye, spaced vertically at varying intervals—along with yellow electrical wires that formed a topographical map on the floor, combined to signal this sense of tidal resonance. I wanted to accentuate the perception of the electrical current of pulsing light and to draw out the relationship between its closed circuit system and the tidal circuit of water on the Earth, which is itself a finite continuum, one total water body.

I’m not always sure of what’s going to come, but it’s a process that I’ve learned to trust over the years. I travel to a place equipped with some background research, some ideas and then I devote a lot of time at the site to simply listening to what is there, rather than imposing too many preconceived ideas.

AS: You use the term “expanded drawing practice” to explain your work. Could you explain that further?

JG: I see everything that I do as part of a drawing methodology—it really feels like one and the same intentionality. The primary way that I engage with landscape is through pencil on paper. That’s an important part of the way that I build an abstract vocabulary of sensing, directly through the relationship between gesture and mark, or form, in drawing. Sometimes I spend hours or days drawing, as a way of listening. Sometimes that’s the work in itself, and that’s enough.

Other times, I’ll extend that process to photography or video, or a land art, sound or conceptual work. Even then, the way that I explore and apply these practices—when I intervene in video or photographic camera circuitry for instance—continues to focus on gesture, density, pressure, line and other features associated with the use of pencil on paper.

AS: A lot of your work begins pencil and paper then?

AS: You’ve included two drawings in Place Markers, Drawing In and Drawing Out. What exactly were you trying to capture when you made those works?

JG: Whilst I was at the Bay of Fundy, forming the light installation work, I sat up on the point near Spencer’s Island. It felt like a lunar landscape, a vast space—it’s extraordinary the expanse of space that opens up when the tide rolls out. I spent a lot of time there drawing and thinking about the installation, and some of the drawings that emerged made me want to do an actual durational tidal drawing from low tide to high tide. Because the main work was based at the Bay of Fundy, I then wanted to make something more local to the gallery.

I wanted to start the first work from the Halifax side of the harbour at low tide and work from the top of the paper downwards, for the duration of the incoming tide, drawing the tide inwards, towards the body.

At high tide, the tide has a moment of being still, akin to the moment between breathing in and breathing out—a pause. At this pause I took the ferry to the other side of the harbour in Dartmouth to find a site. I then set myself up and started a second work working from the bottom of the paper upwards, drawing outwards, away from the body, as the tide drew out.

My intention was to create a psycho-topographical landscape of how we perceive the motion of immense volumes of water. That’s a fluxing reality, and so the drawing process is abstracted. The form and dynamic of the abstraction is drawn from the imagining of water pushing into landscape, the relationship of water meeting the land, and the continuation of the water body drawing away again. In other words, I’m working with the threshold spaces of tidal and perceptual motion.