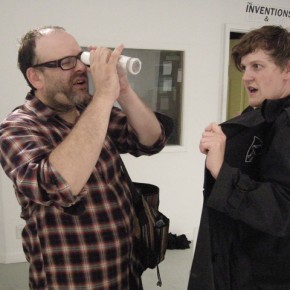 In September 2012, Eyelevel Gallery, an artist-run centre in North End Halifax, was more than simply a venue to take in contemporary art. It transformed into the headquarters of the World Portable Gallery Convention, complete with a stately desk in the main space, a row of wristwatch faces on the wall displaying international time zones, a red light blinking insistently on an answering machine and refreshments compliments of global social networks served from the in-house Feral Trade Café. While development was officially underway on the downtown Nova Centre, a mammoth complex featuring a $164-million convention centre, convening of a different kind was being explored a kilometre away. For a month, Eyelevel served as a hub for a collection of portable galleries from around the world, each hosting their own unique exhibit. Spaces like Hans-Ulrich Obrist’s Nanomuseum, consisting of twin 2×3” picture frames, and Judy Freya Sibayan’s Museum of Mental Objects, where the artist’s memory holds the work, sought to crack open the ways we experience art.

Artists have always sought alternative exhibition spaces outside the white cube: think Marcel Duchamp’s Boîte-en-valise, a suitcase that held miniature versions of his oeuvre. WPGC co-curators Michael McCormack and Michael Eddy, considering the current discourse surrounding the much-debated Nova Centre and the value of networking, had the idea to turn Eyelevel “into this larger than life kind of space,” McCormack says. Throughout the month, art was available “by chance or appointment,” meaning the public could stumble upon an exhibit at a local picnic or softball game, or call up the Eyelevel to receive a special delivery. Galleries were dispatched by Fixed Cog Hero, Mathieu Arsenault’s “existential bicycle courier” service, so that art could appear on doorsteps as easily as a box of garlic fingers.

Hannah Jickling’s Coat of Charms is one example of a gallery that travels well. Jickling, who created an online archive of profiles of mobile spaces for Vancouver’s Or Gallery in 2005, curates the inside of a thrift store trench coat. For the WPGC, Jickling exhibited—or flashed—a set of kaleidoscopes by Portland-based collective F* Mtn. “With this iteration of the Coat of Charms, I was really interested in the gesture of flashing with the coat, that exhibitionism somehow provides grounds for an exhibition,” Jickling says. “So when I was wearing it, I got into this gesture and was thinking, what if art-viewing can become this illicit surprise that is non-consensual?” Jickling emphasizes the importance of non-institutional spaces to queer, feminist artists, linking this importance to her role as a “pervert” startling her viewers. “We owe a lot to perverts!” Jickling says. “When we think about portable galleries and their potential, we have to remember the true innovators, the people who see things from the margins and make their own culture all the time.”

McCormack says that one of the things he’s most drawn to in portable galleries is “that one on one, person to person interaction.” Nowhere is this more evident than in Gordon B. Isnor’s Alopecia Gallery, installed on the bald patches in his beard area (“alopecia” means hair loss). Isnor admits that having a gallery on your face can be weird. “I’m sort of socially awkward,” he says. “If I go to parties or social events, my general inclination is to leave very quickly.” So, it’s usually up to others to approach him, but as he reflects, “if (the viewer) does feel shy, they can’t partake at all.” For the WPGC, Isnor exhibited a very quiet audio piece by Duke & Battersby that not only encouraged, but required, a social exchange, as listeners had to almost place their ears directly on his cheek.

For two of the galleries participating in the WPGC, the intimacy lies in the fact that they exist (or existed) in their curators’ homes. 161 Gallon Gallery is a space of diminutive volume in the residence of artists Daniel Joyce and Miriam Moren, while Paul Hammond and Francesca Tallone ran Gallery Deluxe Gallery in their apartment attic from 2005-2007. Hammond and Tallone never conceived of their gallery as mobile until they were invited to resurrect it at the WPGC. “A huge part of the gallery was the sort of ‘transportation’ that occurred when you went up the ladder into what looked like an attic storage space, from a residential kitchen, and suddenly found yourself in another world,” Hammond says. To recreate this experience, the artist being installed, Chris Foster, was also part of the reconstruction, helping to build a wooden box on stilts so that viewers could enter the gallery from below, peeking up to see yet another replica: a miniature motor home toting a gallery.

An element of tongue in cheek goes hand in hand with the unconventional experience of mobile galleries. That blinking red light, for example, was part of the P.R. Rankin Gallery, managed by McCormack and Convention coordinator Elizabeth Johnson, a site for the public to leave prank messages. McCormack explains that, for many of these pieces, “there’s sort of a joke to it, but it’s also serious at the same time.” Often, artists are enjoying the novelty but also being resourceful, reacting to the lack of opportunities, for example, for emerging artists to show their work.

The spirit of portable galleries, Jickling says, “challenges the role of ‘the expert’ and re-invents the terms and conditions under which art is produced and received.” 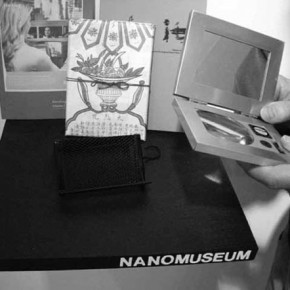 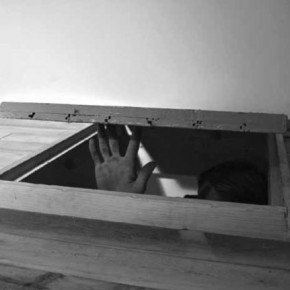 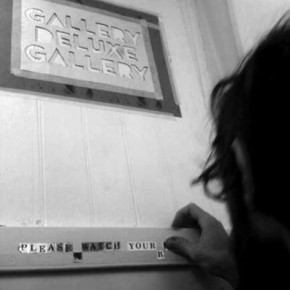 From Melbourne to the Bay of Fundy Previous post

Jaime Forsythe is a Halifax-based writer. Her first collection of poetry, Sympathy Loophole, was published by Mansfield Press.