There is a quiet sort of romance to be found in I want to be a plant, Waka Okabayashi’s recent graduate exhibition at the Anna Leonowens Gallery. The delicate paintings, most of which feature single hands and plants, suggest an intimacy and affection often saved for lovers and those closest to us, which begins to make a lot of sense as she talks about her work. “Something happens when you’re walking and you’re kind of selecting which plant you want … Sometimes I’m just walking and I’m not even thinking of collecting plants, but I see a plant and its almost like our eyes meet.” This courtship Okabayashi describes is something of a culmination of a relationship that began years ago, when she first encountered Bernini’s Apollo and Daphne, a relationship reignited when she moved to Canada from Japan after middle school.

“Sometimes I’m just walking and I’m not even thinking of collecting plants, but I see a plant and its almost like our eyes meet.”

“High school was a hard time for me because I wasn’t sure, like, who I was, and I think I found comfort in looking at plants.” This comfort and closeness permeates the exhibition, especially in the paintings that visually marry human and plant into a single complex entity. A large black canvas features the top half of a woman’s face, her eyes closed as though in meditation: atop her head rests a large, almost unwieldy crown of blooms and blossoms, out of which reach small pink hands, clutching the flowers and reaching out, palms up, as though seeking another hand to hold. The delicately folded hands that peek out underneath the large, globular blossom in another painting calls to mind classic portraits of society ladies, hands primly folded in their laps, suggesting a single being, not two. 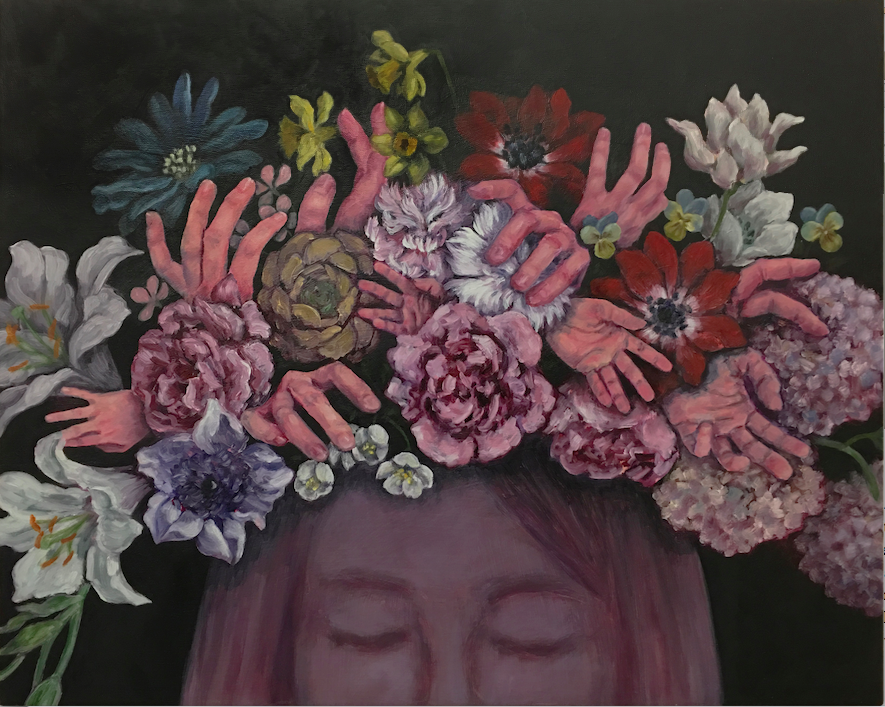 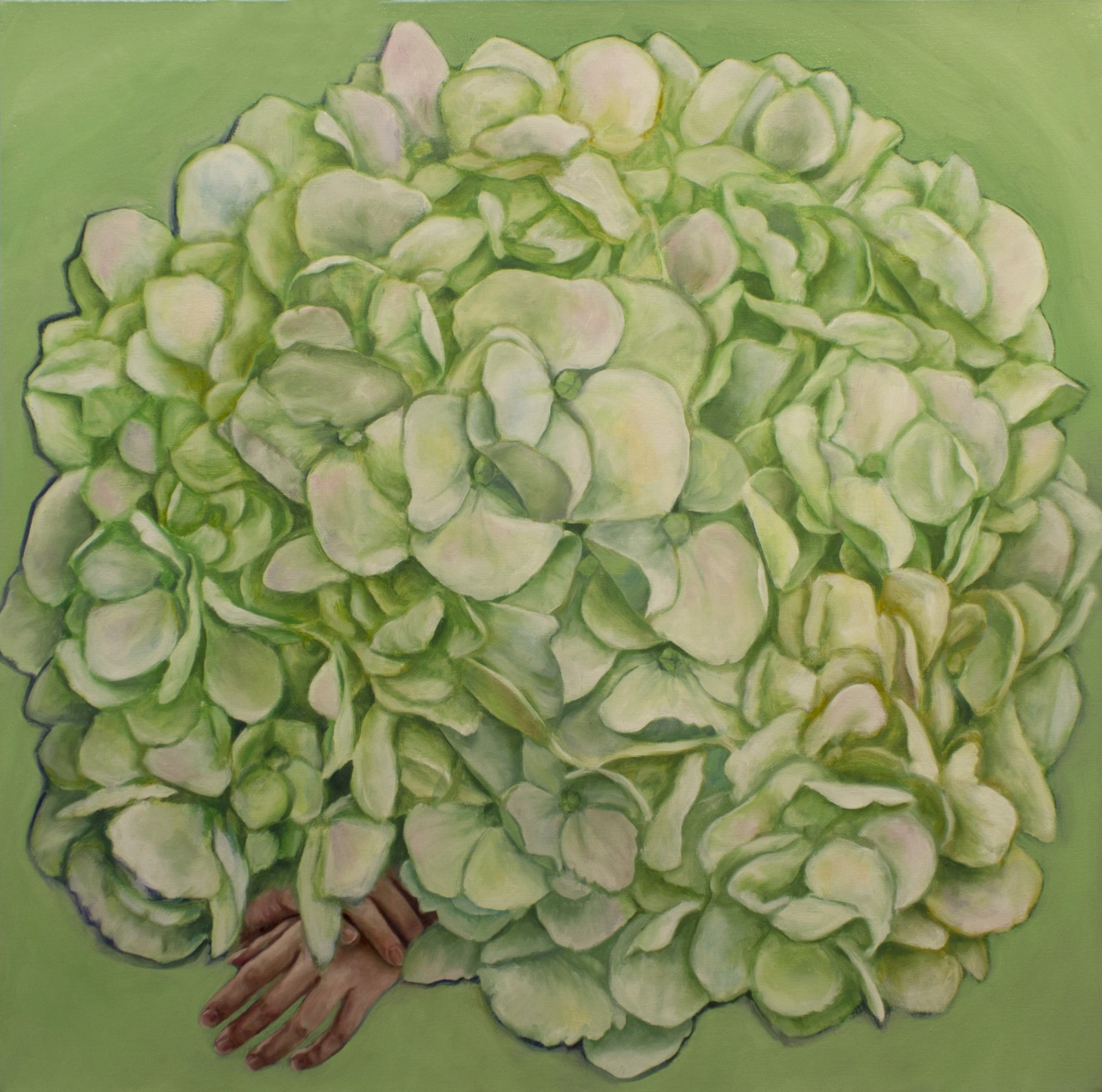 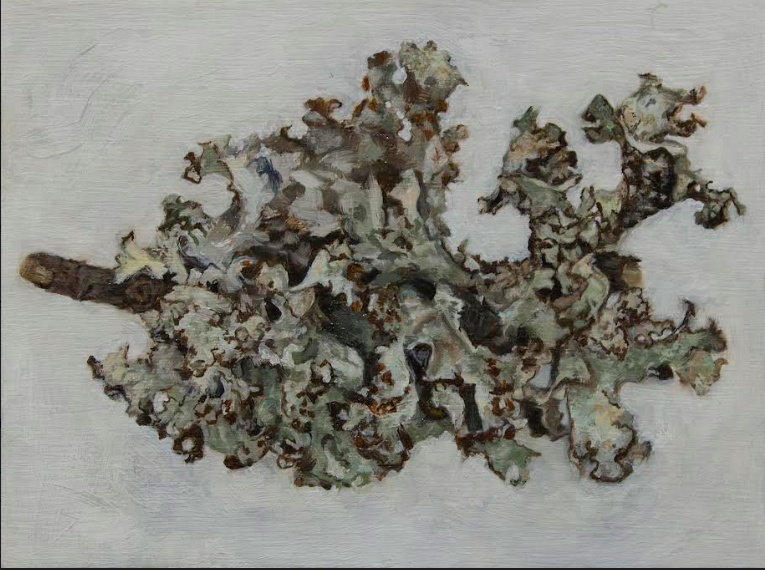 There is an undeniable delicacy and complexity in Okabayashi’s renderings of hands and plants, one with a fine focus on the veins and gentle curves of each that suggests a connection between the two beyond the exhibition’s titular declaration. Smaller panel paintings feature a single hand or part of a plant, while some seem to compare the two appendages explicitly, with the curve of a dried leaf placed directly above a hand curled in much the same way. Okabayashi explains the relationship she sees between hands and plants as one of a shared, but often unseen complexity. Hands, she says, are “a really complex part of your body, but you don’t really think about hands as they are, because they’re just a part of your body. I think that’s similar to how we view plants sometimes, they’re just around but you don’t really pay attention to them until you decide to.”

These more isolated images, those that showcase in incredible detail a single hand or a clutch of pine needles, seem to hint at a sort of meditation or even hyper focus, honing in on the unique beauty and intricacy of the subject. While this close focus does suggest a sort of affection and intimacy, Okabayashi insists she finds in plants “a kind of silent beauty that’s separate from any kind of emotion or thought almost,” and suggests that painting them “is almost like a meditation.” The artist describes herself as “someone who is really controlled by emotions,” and while she is quick to clarify that she does not consider that at all a bad thing, she admits that she finds herself “very comfortable with that idea of plants and of beauty detached from emotions.”

It should come as no surprise that the artist behind a body of work that suggests such a complex connection between plants and the human body has her own complex relationship with her subjects, and how she comes to express them. Like any relationship, it is a process, one that takes time and effort to create connections and build something before it can be shared with the world.

“Painting doesn’t happen in one go … in this process I get to let go of strong emotions and sometimes, even though I’m thinking while I’m painting, it’s like a different kind of thinking, almost like by painting I can relate to plants in a way. That’s really comforting for me.” This comfort she finds in the process is evident to and shared with her audience; after spending time with Okabayashi’s painting, I think I want to be a plant, too.