Mario Doucette + the Acadians as outsiders

This interview was originally conducted in French—Read the French version here. 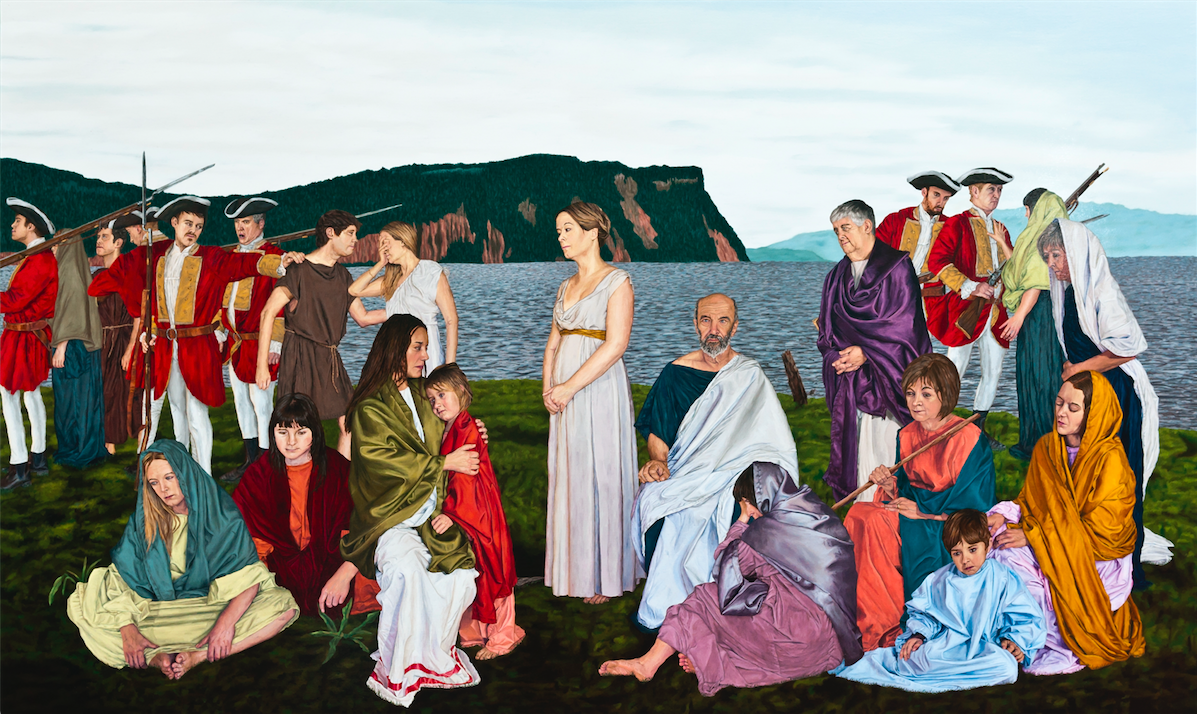 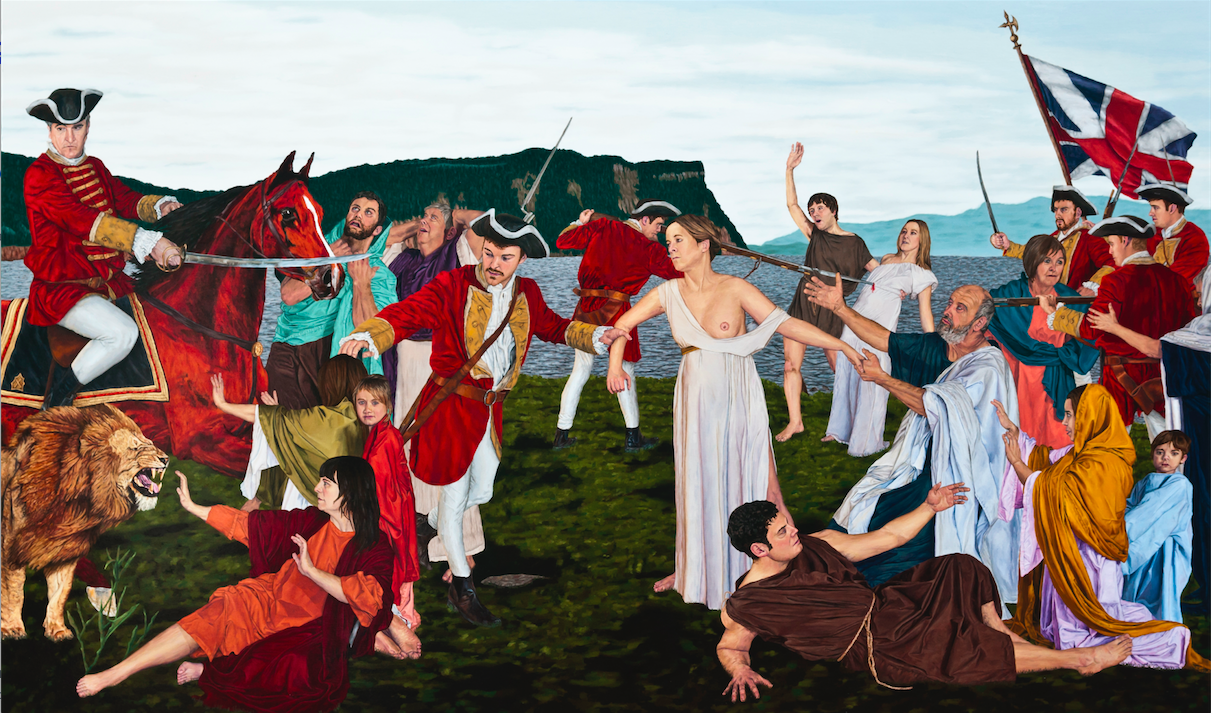 In the summer of 2004, I worked in the gift shop at the beautiful Grand-Pré historic site in the Annapolis Valley, where visitors learn about the history of the Acadian people and their expulsion from their homeland at the hands of the British Army. I had been politely let go from my previous job at a café, due, I suspect, to my penchant for listening to music and daydreaming rather than polishing glassware or serving customers. At the Boutique de Grand- Pré, I was free to play what I wanted from the selection of Acadian music for sale. My go-to was Madame Butlerfly, Edith Butler’s little-known foray into New Age music. Sitting nestled amongst Acadian stoneware pottery and hooked rugs, listening to a rendition of Grain de Mil that featured backing vocals sung in what I believe to be Mandarin, I had a clear view of historical murals of Acadians building dykes and tilling the reclaimed soil in bonnets and aprons or breeches and high socks. Artist Mario Doucette has never liked these depictions.

“It always bothered me. I tried to research the clothing of the time, but in my art it never looked right.”

He remembers being introduced to similar images as a teenager. In his earlier series, Histoires and Bagarres, Doucette uses line drawing and a naive painting style as a child’s lens in an attempt to go back to the romanticized, mythologized version of Acadian history he learned as a kid and imagine it differently. In his vibrant, unaffected yet fantastical drawings and paintings from these series, you can sense the teenage urge to embellish the margins of the quaint, folkloric depictions found in interpretive centres and textbooks.

Basing his paintings on extensive research, Doucette promotes aspects of Acadian history that have been obscured in popular portrayals inspired by works like Longfellow’s epic poem Evangeline, where Acadians are presented as tragic figures and passive victims. “In my paintings I highlight heroes that people should know who we don’t learn about in school. We didn’t know that there was an Acadian resistance, we didn’t know that there were people like [resistance leaders] Father Le-Loutre and Joseph Broussard.”

However, there is a question mark hanging over Doucette’s work. In his paintings, Acadians do not wear the folkloric costumes I remember from the Grand-Pré historic site; instead, they are depicted as translucent figures, or their bodies are scribbled over, or they are naked. More recently, in Harias, they are shown wearing classical robes. These choices underscore a key issue in Doucette’s project: the absence of a historical record that reflects the Acadian perspective.

“It’s a people that existed, but we don’t know a lot of details of how they lived … We only have one perspective of our history, the perspective of the British. The histories were written based on their accounts.”

Faced with the impossibility of a truly accurate version of Acadian history, Doucette has accepted that he cannot go around the traditional narrative, but must go through. Rather than feel limited by the lack of alternatives to the historical tradition, he chooses to see the freedom that his playful approach to historical narrative and his outsiders’ perspective afford him. “I have an incredible liberty to play with these ideas and imagine what it was like in Acadia because we really don’t know.” 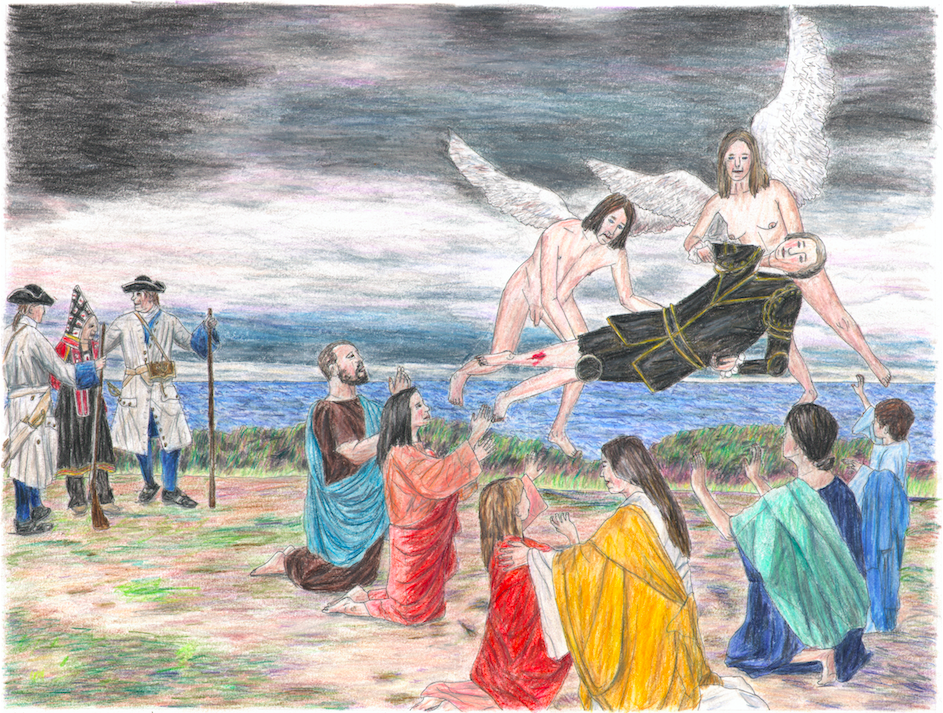 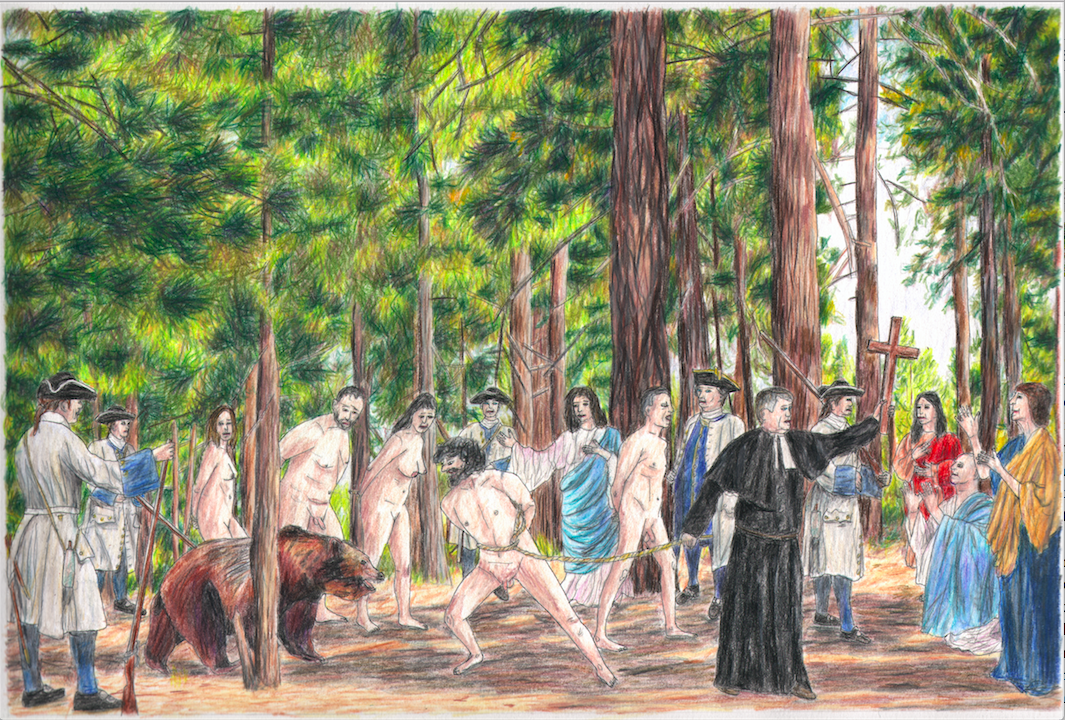 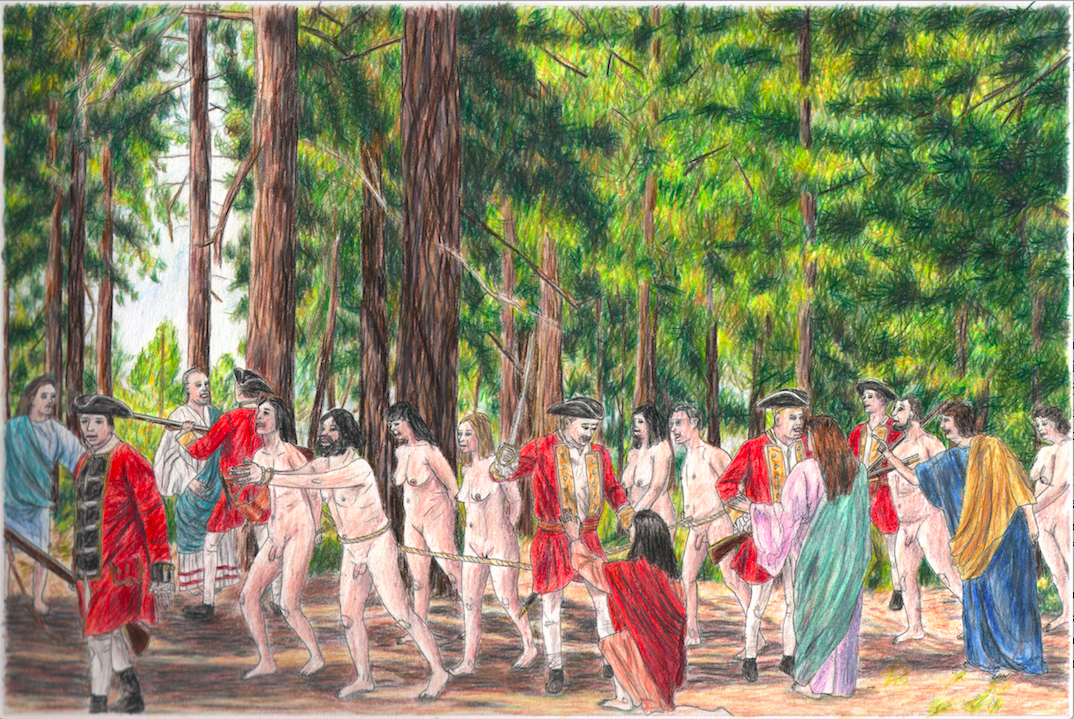 If Doucette’s work from his first series strongly recalls the aesthetics of outsider art, it is not by accident. Doucette has a strong admiration for self-taught artists like Henry Darger and appreciates the freedom afforded by operating entirely outside the system. The marginal role that Acadians have had in telling their own history makes them outsiders too.

Including anachronisms and mixing his own inventions with historical symbols, Doucette creates parallels between his own fantastical choices and those of historical artists. Symbols like the British lion and Superman, American myth par excellence, confront each other in his art and reveal the absurdity inherent in imposed external narratives. In this historical world of toppled idols, Doucette is free to dress his Acadians how he wants. “I thought if we have no stories of Acadians from their lifetime, then they kind of exist of out of time. So I continued drawing them nude, and now I put them in Roman robes, which ties in with the neoclassical style I’m attempting.”

At first glance, the meticulous neoclassical oil paintings of Harias are a major departure from the playful outsider aesthetic of Doucette’s earlier art, but they can almost be seen as parts of a larger installation. In his exhibitions, he decorates the gallery to recreate a salon or a history museum and viewers enter another world. “The message of propaganda is transmitted in multiple ways, including through the context the work is presented in.” He calls his work propaganda art and it’s clear that this is how he looks at all historical art. Doucette appropriates the trappings of official, noble art, from the robes to the gallery walls, to give weight to his new versions of Acadian history.

“People behave differently in this kind of space. They tend to whisper.” The alternate history first imagined in the naive style of a child’s drawing now comes alive and we are able to step into it. Doucette recognizes that his subject and his audience are very localized—he says that he has Acadian viewers in mind as he creates his work—and yet he hopes everyone who sees his work will appreciate the global appeal. His engagement with historical absence has lead him to engage with universal questions about historiography, the political role of historical art, and what possibilities there are to move beyond received identities and narratives. Like a daydreamer in the midst of a history lesson, Mario Doucette is immersed in tradition, looking for freedom, for his art and for the Acadian identity.

Walter is a translator and writer based in Toronto. He grew up in Nova Scotia, has lived in Quebec and France, and speaks French with an accent that all francophones around the world find confusing.