The Long Time collapses the distance between "us" and "others" 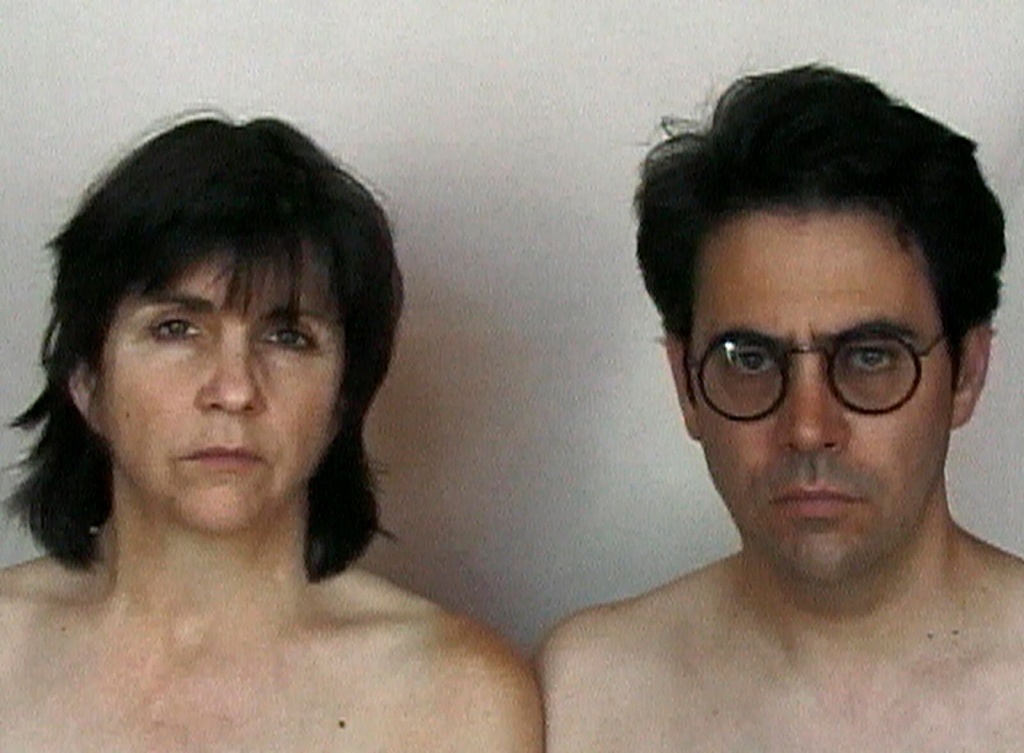 I called my best friend and we pretended to be a radio show. I’m looking forward to seeing if my tomato plants live. I’m afraid of heights, even though sometimes my brain forgets but my body remembers. My favourite colour is blue. I had a nightmare about my partner dying. I dreamed about a dog I saw that looked like the dog emoji.

Photographic confessions line the walls of the Dalhousie Art Gallery and the entry way to the Arts Centre. As you push open the door to the main building before making your way downstairs to the gallery, you’re confronted with a photograph of someone else, a single person, pushing through a different door. The image is overlaid with text, the one-sided answers to an interview with questions you can only image. 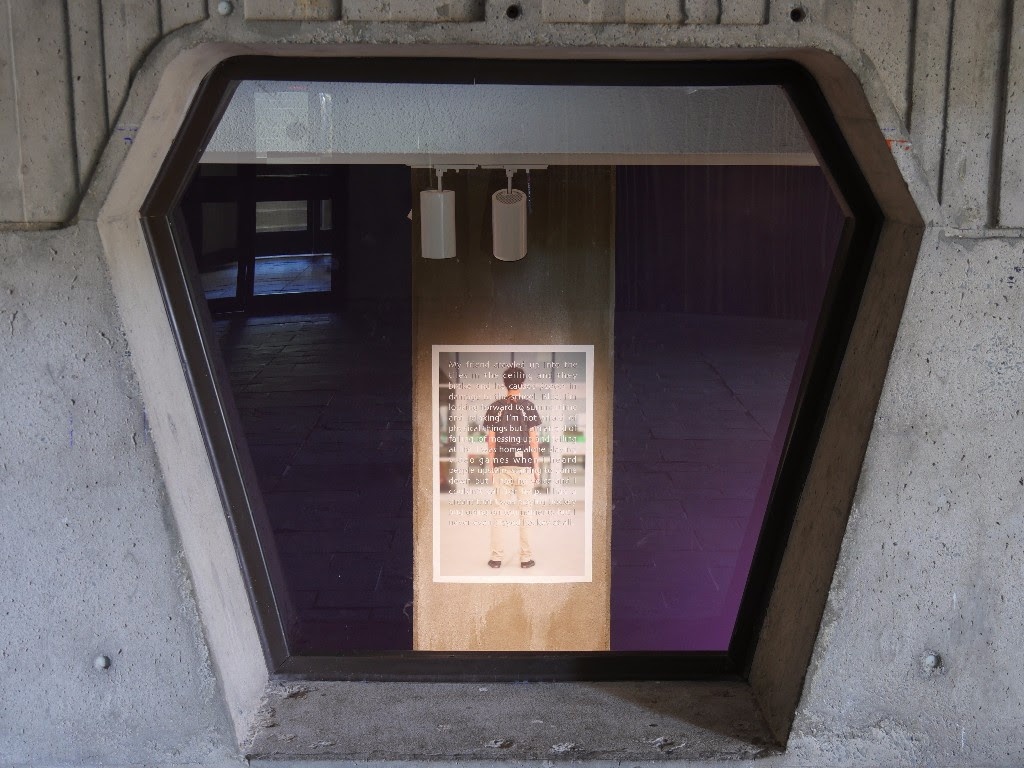 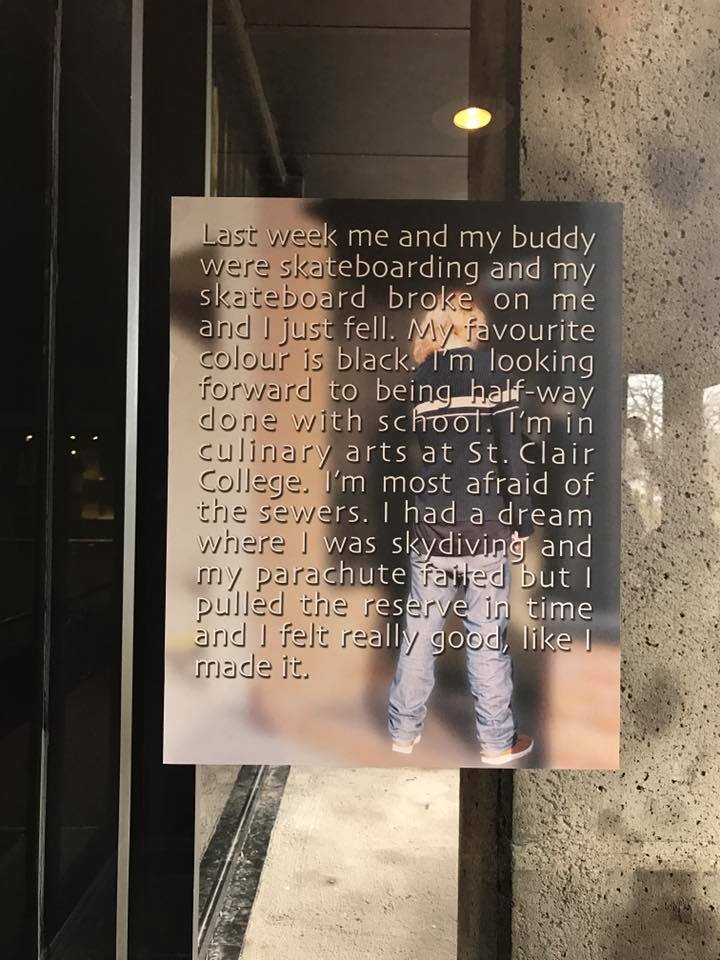 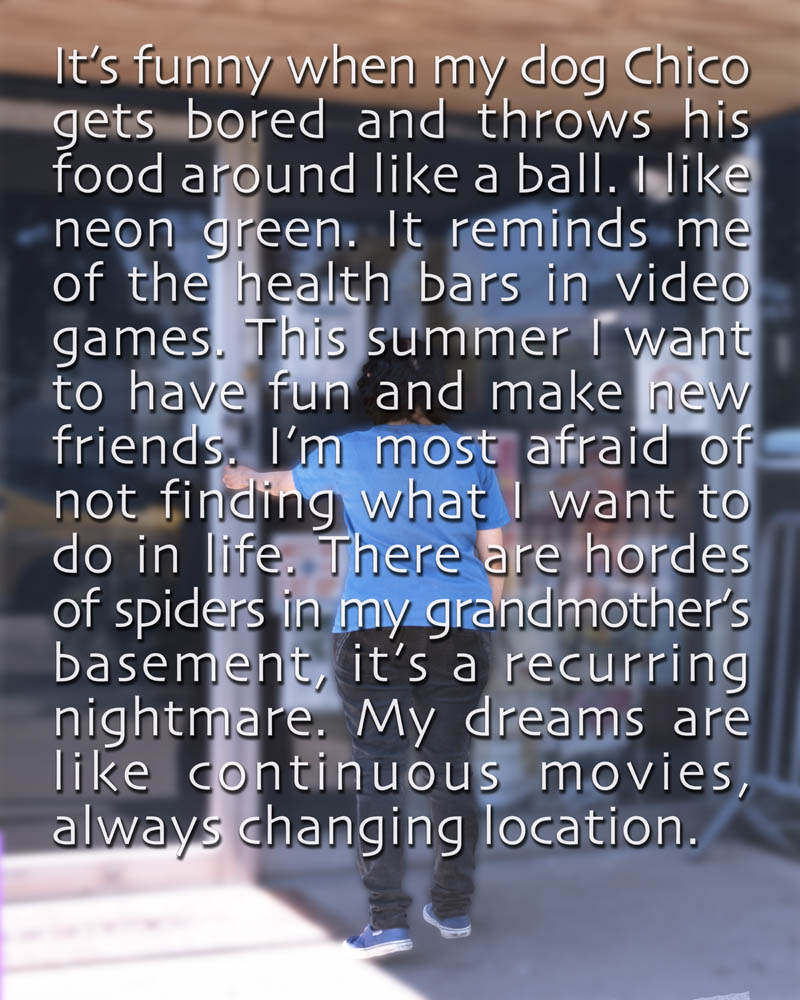 Lisa Steele and Kim Tomczak, Digital Print of …bump in the night. Detroit. Via steeleandtomczak.com

These photographs belong to a series titled …bump in the night by Lisa Steele and Kim Tomczak. They’re part of the exhibition The Long Time: The 21st Century Art of Steele + Tomczak curated by Paul Wong (May 5– July 16, 2017). But the titular reference to century isn’t just a temporal marker; it points to the technical and aesthetic about-face of media art that occurs as the analogue shifts to the digital.

Each work in the exhibition marks this shift, while noting the slippery moments where the distinction between “now” and “then” is rendered poetic, humourous, dark, urgent or otherwise irrelevant—more often than not, all at once. Wong’s curatorial choices, including a dominating, deep purple wall, foreground the interplay of these contrasting elements and allow each juxtaposition to flow into the next.

These contradictions are apparent in …bump in the night, as fears and dreams sit comfortably next to each other, familiar with their unease and unpredictability. The series, an ongoing project for Steele and Tomczak, depicts students from Vancouver, Detroit, Windsor, and Halifax just before graduating high school and college. The students’ answers betray the transitional moment they’re caught in. Their words are earnest, clumsy, self-conscious, naïve and wise, and, when superimposed over top posterior portraits of their bodies, they demonstrate that transition can be the moment when interiority becomes externalized; when private becomings are made public; when others can see that while you’re not quite where you want to be, you’re going somewhere. In these moments, identity is suspended between external and internal modes of construction, as observers are able—invited or not—to partake in the construction of the self. As the artists state, these instances of collaborative self-definition allow viewers to “close the distance between us and them” and recognize the similarities in our hopes and fears, while allowing the subjects to “speak for themselves.”

The intimacy of the students’ answers felt like an invitation to imagine my own—they’re listed above. I wondered if I am as honest as the subjects in the photographs, who admit things like the fear of losing family members or the hilarity/humiliation of hurting yourself in front of an audience. I traced my moments of self-censoring and noted where I took pains to push past it. I wondered if there is a subconscious desire for this kind of vulnerability and interiority to be made visible, to be expressed through the body, to be seen and interpreted by someone else.

As I round the corner and encounter …before I wake, a three part video work that took twelve years to make and, as Wong explains, acted as the impetus for the exhibition, this question feels even more pressing. Here, the relationship between self-censoring, the subconscious and the body is made explicit. In the central video work, Entranced, Steele and Tomczak are filmed separately as they undergo hypnosis. The psychotherapist’s voice fills the room while a transcript of the artist’s answers to the doctor’s questions is shown, silently, next to a close-up shot of the patient’s hypnotized face.

…before I wake is in part a response to Steele’s diagnosis with breast cancer, when the couple was confronted with the possibility that one might die before the other. The two video works that flank Entranced, titled We’re Getting Younger All the Time and Practicing Death, depict the physical realities of aging, and the physical and psychological closeness and distance that can exist simultaneously between two bodies. Reading the three pieces together, the friction between body, mind and desire is tested and examined. While We’re Getting Younger All the Time and Practicing Death illustrate how the body communicates in ways the mind cannot, in Entranced, the mind catches up with the body and the couple’s subconscious responses are revealed. In this piece, the couple, so commonly known for producing bodies of work as if with one voice, speak with two very distinct voices.

In Becoming, a four-channel video projection, buildings replace bodies as sites of aging and transition. Displayed on floating screens arranged in an arc formation, the videos depict the between states of four different cities: Vancouver, Berlin, Toronto and Montreal. A fifth video in the series, Becoming: Halifax, is displayed on a separate wall. The videos map locations in each city at various stages of construction, deconstruction, gentrification, and decay. Instead of the textual ruminations and admissions in …before I wake and …bump in the night, themed jokes interrupt the images of urban landscapes in Becoming. Each city has its own comedic punching bag: Vancouver=economist; Berlin=philosophers; Toronto=urban planners; Montreal=insurance agents; Halifax=fisherman. As each screen shifts rapidly between streetscape and text, you often catch the joke but miss the punchline.