A walk through Charlottetown’s Art in the Open 2014 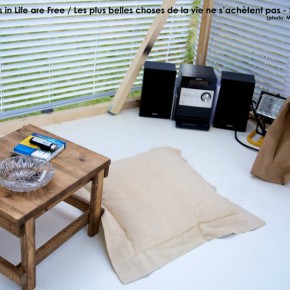 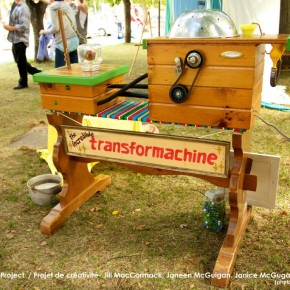 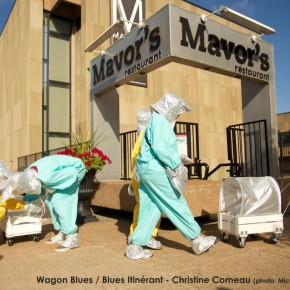 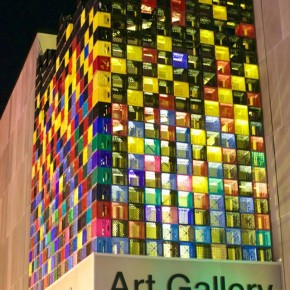 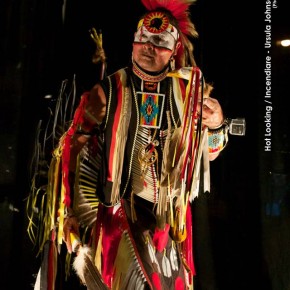 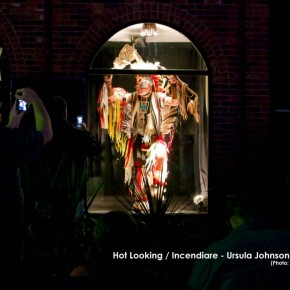 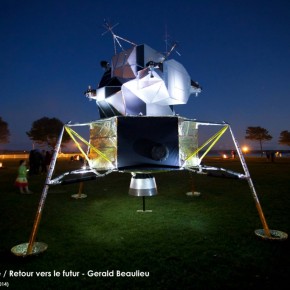 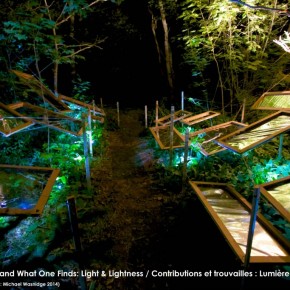 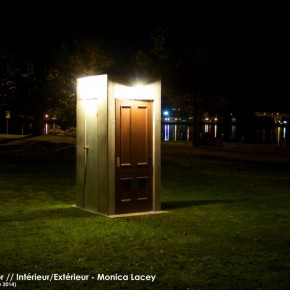 The Scotiabank Nuit Blanche spectacle in Toronto with its more than 110 contemporary art projects gets most of the press, of course, but Charlottetown’s fourth annual Art in the Open—with more than 36 projects in six locations throughout PEI’s capital city—was an evening’s entertainment worth the travel. In 2013 I made the error of having to leave by 7 pm little knowing that the art really only gets going after the sun sets. No mistake made with the second visit to this ambitious Atlantic Canadian project: I wandered the streets and parks for the entire eight hours, 4 pm to midnight!

Yet we still weren’t able to see everything and, perhaps, that is the important aspect of these temporally tightly defined public art productions that seem to be popping up everywhere in lieu of and as a kind of poor community’s “biennale”?  In their “Welcome” to the 2014 Art in the Open, curators Pan Wendt and Becka Viau state “the aim is to provide through performances, installations and projections, experiences that help us rethink the spaces we move through every day.” They didn’t succeed with me. What was exhilarating that late summer evening in August was the immediate sense of audience, and especially younger audiences, and the feeling that our art and culture need not be restrained and limited to the confines of that specially groomed place, the gallery. It was exhilarating to hear kids yelp and yell from experiences and encounters that gained their attention without anyone saying “Shush!” It was more that feeling of an open encounter without regard for all the usual accoutrement that comes with art viewing. It was such fun to see kids, and adults too, playing with Monica Lacey’s Indoor/Outdoor sculptural installation in the night darkened Victoria Park, and later joining all manner of person brought to a stop on a Queen Street sidewalk to figure out what they were seeing and hearing with the staging of Ursula Johnson’s Hot Looking performance in the window of the normally sedate Casa Mia Café.

It seems to me unlikely that many, if any, people came away from Art in the Open rethinking their experiences of the spaces they occupy everyday, with a different understanding of the beautiful Victoria Park or the existing delights of the urban Rochford Square. The curatorial aim suggests, I think, how distanced we professional art people can get from every day experiences notwithstanding our best efforts. Well, theory and practice are often distant cousins without much effect on the vibrant lives of the other!

My evening started at 4 pm hanging around the Confederation Centre Plaza, one of the six loci for staging Art in the Open and, almost eight hours later, the site of the last project I was able to see as well as a snack and refreshing drink around the welcomed warming fires of Mavor’s. What gained my attention? What did I like, and there is no reason why I, or anyone, would like everything.

Alexis Bulman was just setting up The Free Ads Structure/L’issue des petites annonces gratuites on the plaza overlooking the pedestrian only Victoria Row: a collection of found objects from free ads, objects that would be offered free of charge later in the evening. The homemade sculptural pile was just beginning, and when I returned evidently all had been given away because there remained no trace of art. From nothing to nothing has long been a powerful philosophical concept. Nowadays it is also a powerful art attitude, often merely a conceit, for a way of working in a hyper-productive world, a world where more product is a matter of bad faith and counter-productive. Bulman’s project worked very well because it almost never existed for me! I liked that.

There must have been half a dozen and more projects around the Confederation Centre of the Arts (home of Anne of Green Gables – the Musical and of the Confederation Centre Art Gallery). Over the railing from Bulman’s project on Victoria Row, Amy Malbeuf continued her 2009 performance Portals/Portails, one component of Art in the Open’s Indigenous Art Programming curated by Carla Taunton and Heather Igloliorte. The artist emerged on the crowded street scene covered from head to toe in a golden, skin-tight body suit. She pushed a garden variety fertilize spreader loaded, I found out later, with pinkish salt. Malbeuf walked spreading the salt, creating a strikingly colourful circular residue and then made a second circle next to it before leaving the street stage. Almost immediately the kids of all ages in the audience flocked to the circles and played in them as if the circles were tempting puddles of water. Soon the discrete circles were blurred almost to oblivion. Historically, “salting the earth” was a symbolic ritual to place a curse on conquered lands to prevent the original inhabitants from returning.  The work was somewhat confusing conceptually, I thought, but, ironically, hugely enjoyed by the mainly white middle class audience. Perhaps that is Malbeuf’s point?

Maybe because it did not have a “point,” Monica Lacey’s Indoor/Outdoor was more intriguing, exciting to my fancy. And kids seemed to like it too! A small structure in the middle of a great field in Victoria Park and made only of doors for ingress and egress – actually, only enabling entrance and exit from a space that wasn’t a room or hall or anything but a space for doors leading only from here to the other side of there on a dark night. Alice’s Adventures seemed suddenly transported to here and now. What nuttiness art can offer if both it and we step out of the ordinary.

Lukas Steinman’s Tourists was one of the works truly developed with the darkened context of Art in the Open in mind: cutout silhouetted figures of stereotyped tourists suddenly popping out of the night woods fully illuminated. The first tourist completely caught me by surprise before it disappeared and then another popped up any particular further along the park path. It was very funny and a wry observation on Island culture without making judgmental critiques.

Other projects were more seriously demanding than might be apt in an evening’s festive spirit, although Rilla Marshall’s Diminished Island was serious, subtle and effective. Marshall highlighted the sea’s projected rise in level 90 years hence with a series of stakes extending for perhaps a kilometer along Victoria Park’s water edge. Each stake was topped with lights. For the uninitiated it was a serpentine line of lights that delighted the eye as lines of light at night do, perhaps because it makes us think of the creation of form out of nothing? When informed, our eyes have a graphic demonstration of contemporary climate change.

By the time I got to Diminished Island—several hours and several kilometers later—I was tired and greatly appreciated Amanda Fauteux’s Victoria Park Public Transportation. With schedules of stops posted throughout the park and dressed in a homemade uniform, Fauteaux  freely offered rides to customers, a social practice made truly helpful! When I got to the end of my ride, I was ready to head back downtown because I did not want to miss Ursula Johnson’s Hot Looking performance.

You do have to imagine a main street in a provincial capital late in the summer’s evening with lots of people, tourists and guests and residents, mulling around enjoying themselves and often looking for one of the several bars and eateries. Blasting from a brightly lit storefront is a pop jingle of a song and there in the window a young man dressed in “traditional” indigenous garb. He is dancing in a “traditional” indigenous manner and lip syncing No Doubt’s “Looking Hot” (the 2012 video for this song features the white singer Gwen Stefani decked out in culturally questionable Native American-style costume).  I have put “traditional” in quotation marks because we are into the problematic and often fiery arena of cross-cultural discussion. I do not know very much about what may or may not be traditionally indigenous here in Maritime Canada, so experienced this performance at face value. The  performer was dancing his heart out and lip singing the song, now and again looking and pointing suggestively at the audience. It was funny. It was exhausting as contemporary durational performances usually are as they test our resolve to stay with the performer. It was surreal and like great surreal art it was finally unnerving and disorienting. I didn’t catch the full extent of Johnson’s reference until some retrospective digging, and can only here suggest that you look at the No Doubt video yourself to fully appreciate Johnson’s work.

I missed as many projects as I saw at Art in the Open and that’s probably how it ought to be in this kind of festival atmosphere. Fullness and exuberance must be the kinds of descriptors for these events. And messy. Dozens of descriptors that are not usually brought to bear for a gallery exhibition. Just when I might be thinking the organizers had reduced art to another class of entertainment, I would encounter a project that was both entertaining and sustaining. What more could I ask? Well, I can look forward to a 2015 Art in the Open! 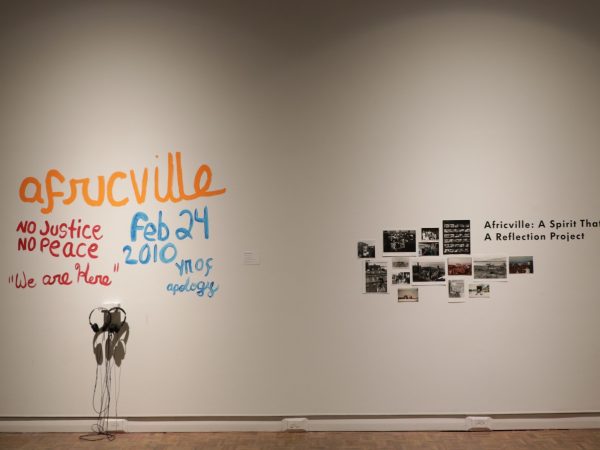