A conversation with John Devlin

Since 1984, John Devlin has created 675 letter-size sketches centred around King’s College in Cambridge. It’s a site that has captured his imagination, also prompting a series of long saga-like poems, short stories and a dream diary. The Nova Scotia artist’s work has made an international splash, finding a home in permanent collections ranging from Paris’ abcd Collection to London’s The Museum of Everything and the Collection de l’Art Brut in Lausanne, Switzerland. Eryn Foster catches up with Devlin as his spring show opens at Paris’ Christian Berst Gallery and he prepares for a solo exhibition at the Art Gallery of Nova Scotia in 2015. 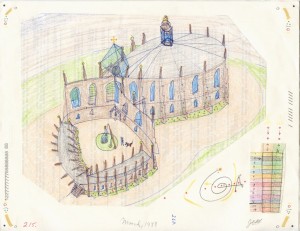 Eryn Foster: In the late 1970’s, you applied, and were invited, to study theology at Cambridge University. After one year, you left England and returned home to Nova Scotia. Could you talk about the circumstances that led you away from your calling to the priesthood, and also what propelled you to eventually become an artist?

John Devlin: In the two or three years following the breakdown in my health in 1980, it became clearer to me and to my bishop that we ought to part ways. I thought as late as 1981 that it would be possible for me to return to Cambridge and finish the tripos. But Bishop Hayes’ feeling was that my illness was a sign that I did not have a true vocation. In a way, that was fine with me—it was becoming clearer to me that maintenance of my illness was going to be a long- term matter, and I would be ill-suited as a pastor. So I was footloose and unemployed and fell back upon my family to support and house me. A considerable strain for my parents and sister! I was put on lithium for a while, then had a manic episode in August 1982 that led me to another stay in the Nova Scotia Hospital. While there I was put on another anti-manic drug Tegretol and in less than a week I was in my right mind. After that I never looked back.

I don’t want to give the wrong impression here, but it was (and remains to this day) my very unscientific hypothesis that that drug (Tegretol) working on my particular brain, was what was responsible for an outpouring of artistic content—literary and visual. It was a pleasant side-effect. Up until that time everything I did (even when well) was tentative and amateurish. After I began the Tegretol, the art poured out of me. Being an artist is, for me, largely—but not entirely—a chemical thing, I think. I still take Tegretol, and must for the rest of my life.

I did not plan to become an artist. It just sort of happened. One drawing led to another, one idea led to another and by 1988 I had a pile of drawings big enough to show Cliff Eyland, who at that time headed the resource centre at TUNS Architecture. Cliff discovered me and exhibited me for the first time, at TUNS, in the fall of 1988.

But I think in retrospect that I became an artist in August 1982—it was then that my BC ended and my AD began. 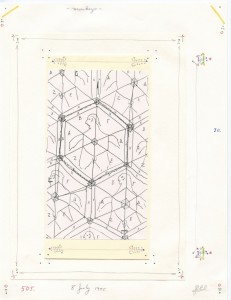 EF: The “pile of drawings” that you mention, were these the beginnings of your three decades-long nova cantabrigiensis project?

JD: Yes. I began in 1984 not knowing where I was going. Only gradually did my ideas firm up and I saw I was creating a fictive world I could inhabit. I do in fact vicariously inhabit that world—I draw myself (and a friend’s dog) into many sketches.

EF: Can you tell me more about the origins of nova cantabrigiensis?

JD: The origins of the work—when I first had the idea of a university in the middle of the muddy Minas Basin—is, like most origins, rather murky. Easier to answer is the origin of the term ‘nova cantabrigiensis’: it first appeared as a throw-away expression in an exhibition proposal I sent to Acadia University Art Gallery on October 2, 2010.

The first ‘New Cambridge’ was Harvard College: founded by the Cambridge man John Harvard in Cambridge, Massachusetts. Harvard University I see as a forerunner of my nova cantabrigiensis. Universities were invented at the end of the mediaeval era in Italy out of the monastic tradition. They were repositories of the new humanistic learning that was to become the Renaissance. The University of Paris was the first founded outside Italy. Wandering scholars moved from Paris and started Oxford. Then disgruntled students left Oxford to found Cambridge in the Fen country. John Harvard, upon the conclusion of his studies at Emmanuel College, Cambridge in 1637, left England for America. I wanted to continue the migration of this university ideal from Italy to France to England to USA to Canada. Bishop Charles Inglis fled the colonies during the American Revolution to settle in Nova Scotia. In 1788 he founded King’s College in Windsor, N.S.—a stone’s throw away from the Minas Basin and another forerunner.

My feeling was that the old Cambridge University in East Anglia had lost its existential isolation in the Fens. Present-day Cambridge is strangled by traffic and surrounded by science parks. Building a near-replica in the wilds of Hants County where students could study or retire—far from the excitement of the larger centre of Halifax—echoed the old Cambridge where the foundation was far from the metropolis of London.

I also wanted a Cambridge University in Canada which was a reformed institution: where alcohol did not form so large a part of the culture, where the hubris and arrogance of the ethos of old Oxbridge would be absent, and where the destructive pressures of excessive study and exams would also be absent. I had suffered because of the pressures to perform in Old Cambridge and I wanted none of it. I also wanted a Cambridge in Canada which could be a retirement colony, where there was no pressure to leave after three or four years and one could live permanently. I had studied at the only modern Roman Catholic college in Oxbridge (St Edmund’s) and I liked the monastic ethos of the place as a place to dwell in, and not simply to pass through.

The drawings that compose the work nova cantabrigiensis led out of these contexts and ruminations.

EF: Did this act of creating an imaginary world allow you to escape from the difficulties of living with mental illness?

JD: Very much so. This world was the scenography for a Jamesian opera based on The Golden Bowl which I was reading over and over again at the same time I sketched. It’s pretty over the top!

EF: I am curious to know how you feel about being an artist who is identified, and also exhibits, within the category of Art Brut?

JD: I like it! My only hesitations are that my art sometimes is too genteel. The Art is not Brut enough. But all in all I like the quirkiness that goes with being in the category. What I was drawing in 1984- 88 was much more forceful and driven than what I do today. Even violent. But in 1988 nobody very much was paying attention to what I was drawing (with the exception of Cliff Eyland). It was not until 2012 when Henry Boxer expressed interest in representing me that people (I guess) started noticing what I was doing. But I am still drawing, and probably it will take another 26 years for what I do now to ripen (or rot). I am more ‘minimalist’ these days; still obsessed with the front court of King’s Cambridge (as I was in 1988) but drawing it in a different way—sparer, leaner, more ‘white box’. I am giving my dots and dashes room to breath on the white surface of the paper. A lot of Art Brut nowadays is congested, dense. What I do now, because it is not so congested and dense, makes me think of parting company with the category of Art Brut. But I am not a curator, gallerist or art theorist. My business is to make images and let the chips fall where they may. 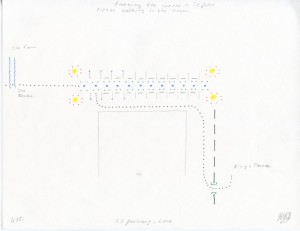 John Devlin, “Turning the corner—St. John Fisher walking in the snow,” January, 23, 2014. Courtesy of the artist

EF: I’d like to know more about the dots and dashes, and also, why you recently felt compelled to write an “Apologia for an art of dots and dashes?” Do you feel like you have let your appreciators down by making work that is so much more minimalist?

JD: As I leave my 50s and enter my 60s I have less artistic and physical stamina, so by necessity am forced to adopt a more economical style. The problem remains the same: how to represent King’s chapel on a piece of 8.5 x 11 inch paper. I used to be naïvely representational; now I use a code or shorthand of dots and dashes. My instruments have changed as well. From my early to mid 30s I used whatever was at hand in my parents’ Walton cottage: Crayola crayons, Laurentian colour pencils, cheap markers and ball point pens. Now 59, I think more self-consciously about posterity and use ‘archival’ Japanese Pigma Micron colour ink pens and black German Faber-Castell pens purchased at the NSCAD art supply store on Hollis Street in Halifax. This changes the entire aesthetic of the drawings.

The ‘Apologia’ derived from mainly imagined charges that my new work lacked the inspiration of the older. I just wanted to explain that my style was different, but that I was in fact consistent, that my subject matter has remained the same. The obsession with numbers and the chapel at King’s has not changed over 26 years, changes in that time to my medication notwithstanding.

I did not really feel I let my ‘appreciators’ down. I was suddenly alive to the psychological reality of being an ‘artist’ and what it felt like to inhabit that skin. I didn’t like it. Drawings that were exhibited in North Carolina and Paris in 2013 and 2014 were—to me—all old hat. People ‘get’ those drawings (I guess) but I have moved on and changed, and my ego was at first hurt that people didn’t ‘get’ the new stuff. I now see that that is a good thing. It puts me back in the existential zone of isolation I was in when I lived in Walton.

EF: In a previous conversation of ours, you talked about how your recent success as an artist has left you feeling corrupted. What did you mean exactly?

JD: The attention of the Paris show in 2013 flattered my vanity, of course, but temporarily killed the muse. Now I have regained my balance and feel less an artist or Outsider artist than this regular dude who does doodles for art therapy. That’s all. As long as I can keep ahead of the curve and maintain a time lag, I will stay in isolation, and hence able to doodle uncompromised and uncorrupted.

Eryn Foster is an artist based in Halifax Nova Scotia.