In pursuit of everyday knowledge 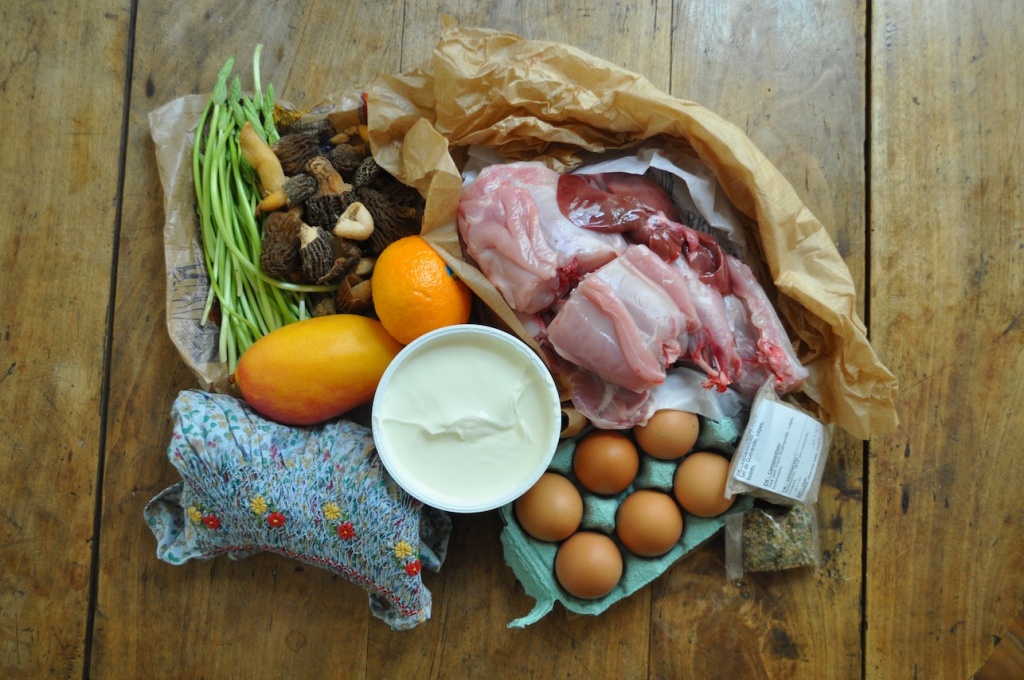 Food collected at a Parisian Farmers’ market during Katie Belcher’s residency at Cité Internationale des Arts in Paris, 2013. Image courtesy of the artist.

In our second installment of Current Conditions and Forecasts: Interviews with Atlantic Canadian Artists, Eryn Foster interviews Halifax-based artist Katie Belcher. From conducting research with a charcutier to meeting a composer in Spain who taught her how to translate music into a visual form, Belcher divulges how spending a year in Europe has influenced her approach to art-making.

Eryn Foster: You have recently returned to Halifax after a year of living abroad. Where did you go and what kind of art-related work did you get up to?

Katie Belcher: I spent most of the year in artist residencies across France and Spain, and also traveled to Belfast for my exhibition at Queen Street Studios. With a grant from the Canada Council for the Arts, I first spent my first four months in a studio at Cité Internationale des Arts in Paris. I also received funding from Arts Nova Scotia and this allowed me to dedicate the year entirely to my practice. I worked on drawing projects, gathered material for future work, visited collections and locations that inspire my practice and discussed ideas with artists, writers and musicians.

EF: While you were in Paris, were you working on a specific project?

KB: I was working on two large-scale drawings in charcoal, titled, Farm collapsing (Ferme s’écroulant). As I pursued my research in Paris—specifically markets, still life, culinary and historical processes and cultural memory—the drawings I worked on in the studio were very much a continuation of my previous rural-inspired drawings. Although my intended project for Paris had to do withcultural memory in general, my experience living there shifted my research to be more specifically related to culinary history and food culture.

EF: Can you talk a bit more about how your time in Europe influenced or changed your practice?

KB: Before I left Halifax, I was on the verge of a shift in my practice, but with little time to dedicate to the studio, this shift was very subtle and slow. The time to focus on my work in a new environment definitely gave me the chance to do this. I found that problems I had been facing in the studio over a few years, were solved easily, when I had the time to think, and space to make. I continued to seek out the critiques and discussions of peers and colleagues, and the communal artist residencies gave me that. In showing my work to new audiences, I came face to face with something crucial to my practice. My highly physical drawing method is evident in the drawing itself. I received comments in Paris and Belfast that my drawings were energetic and dramatic. In my studio in Paris, and at my exhibition of In time’s furrows (Queen Street Studios, Belfast, Northern Ireland), viewers saw fires and floods and disaster, where I had intended to show a quiet destruction of a farm property. It was an eye opener.

The people I met have definitely impacted my work. In Paris, I met an Australian artist who had a nearly archaeological approach to her work. This strategy helped me tackle a particularly chaotic period in a new project. Also in France, I had the opportunity to work with a charcutier, who provided me with a drawing subject. In Spain I met a composer who pointed me in the direction of graphic scores. These shifts were key in the development of my newest project.

EF: I’d like to hear more about what kind of work you undertook with the charcutier.

KB: I was offered a day’s lesson from Philippe Medal at Aux Délices de Caylus, a charcutier, and caterer. This was just for fun, but I jumped at the chance, given my research into historical and culinary processes. Philippe invited me back to work with him once a week, as much to improve my French as to teach me to make a béchamel and de-bone a duck. When he saw my drawings of feathers fused with other textures, he gave me a pheasant to pluck and prepare. I think it was in part to tease me for my ineptitude with French cooking, but also to give me a physical subject. I documented the process, which I performed in the garden of DRAWinternational.

Since then, the drawings I am doing are based on my awkward, inexpert actions of plucking. This informs the basis of my new project, and serves as the test run for a drawing methodology that stems from performing a historical process.

EF: Why are you interested in performing a historical process? Does it serve a purpose or is it more about performance itself?

KB: I perform these historical processes to learn, to escape the cerebral, to examine my own lack of material knowledge, and to develop a drawing gesture; but this action is a performance itself.

My oeuvre as a whole relies on my depiction of domestic and agricultural practices and spaces, disused objects and animal specimens to engage with the broader concepts of memory and cultural knowledge. As a part of the generation that came of age in this “Knowledge Economy,” I question my own lack of everyday knowledge. Unlike my grandparents and their peers, I have little understanding of basic agricultural, building, culinary, mechanistic and medical processes. My drawing practice stems from the examination of these formerly everyday activities that to me are so unfamiliar.

In response to drawing in gallery spaces and to comments from a number of peers, I’m recognizing that there is a performance inherent in my drawings. Unwilling for the moment to draw publicly, I’ve spent the last few years bumping up against this acknowledgement. I’ve come to understand that the performance is in the enacting of the historical process itself, and so the energetic drawing that comes out of that carries a performative quality. The more I dig into this more phenomenological project, the more questions I have, and I revel in that. 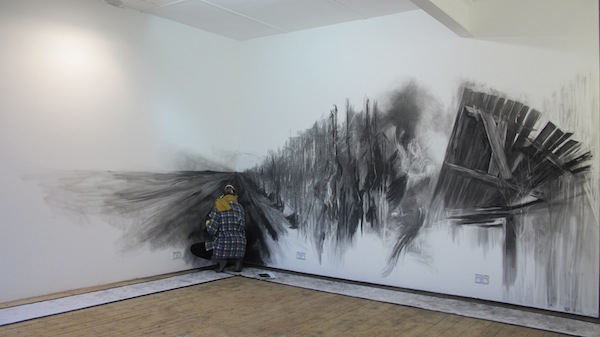 EF: You mentioned meeting a composer who directed you towards the idea of working with graphic scores. Can you explain what a graphic score is and how it might find its way into your drawing practice?

KB: After plucking the pheasant and developing a number of drawing gestures surrounding that process, I became interested in scoring my drawing, as if it were a historical instruction, or a piece of music. When I discussed this with Veronika Krausas, a composer I met in Spain (at Can Serrat International Art Center), she said, Katie, these exist! The right musician will be able to follow it. It was a turning point in the project. Graphic scores are the representation of music in a visual form, without the use of traditional music notation. I’m currently developing a drawn notation, in effect scoring the process for my own large-scale drawings, and facilitating its interpretation in other art forms.

EF: You have just started working as the Director of the artist-run centre in Halifax, Eyelevel Gallery. How has the transition been from full-time artist to full-time administrator? How do you think this position will affect, influence and direct how you make art for the next few years?

KB: The transition has been a bit wild. I started at Eyelevel the morning after flying in from Europe, and it has been a particularly busy fall getting my feet under me. I know I’ll have limited time for my own practice, but my hope to use that time wisely. After this year, I have so much content to work through, I feel like dedicated bursts in the studio could work well at this stage in my practice. I also have a lot of reading and research to do about one particular part of a new drawing project, so I’m hoping to make good use of time outside of the studio too.

The creativity of this job [at Eyelevel] and the challenge of learning something new keeps me actively engaged in art, but I do often wonder if it would be less draining on my creativity to work in a different field. For the next few years, I am gladly taking on the challenge. One thing I learned during my time in Europe, was that wherever you go, you meet yourself. I faced many of the same challenges in getting studio work going. If being a full-time artist didn’t solve those problems, then maybe full-time work isn’t to blame either! This is just the continuation of these lessons. What gets in my way, and how can I work around it?

Eryn Foster is an interdisciplinary artist currently living in Sackville, New Brunswick. Her Current Conditions & Forecasts series for Visual Arts News features exclusive “in the studio” interviews with artists from across Atlantic Canada.