Exploring Chinese-Canadian identities through the lens of "Chinese Food"

Driving down the Bedford Highway in Halifax, you pass signs for China Town restaurant—a Nova Scotian behemoth dating back to the 70s, with that kitschy “Chinese-style” font in huge fire-engine red letters across faux panelling that you can’t miss. Artist JJ Lee’s dad owned the spot when she was growing up, and it’s cemented a life long fixation for her with how people view her “Chinese-ness.” Growing up in Nova Scotia, Lee says she was always “very aware of being an Other.”

“It’s so funny because when I was a kid, I’d meet someone and they’d go ‘where are you from,’ and I’d say ‘Halifax’ and they’d say ‘no where are you really from.’ And I’d say, ‘no really I’m from Halifax,’” explains Lee. “And then I’d say ‘I’m Chinese,’ and they’d go ‘Oh I love Chinese food! I just love like the sweet and sour chicken balls with the egg rolls!’”

The thing was, that food didn’t feel remotely “Chinese” to her. “That was nothing at all like what I had at home, what my mom would cook, what my grandmother would cook—completely different. So there was, like, this outside Chinese world,” she says.

“What’s interesting about the history of chow mein and chop suey and those kinds of things is that they were modified specifically for Western palettes,” she explains. “So it was Chinese people making up this fad almost, or ‘memories of’ Chinese dish. I kind of see it as this way of sort of trying to assimilate or accept it—”

“Or smart business?” I question. 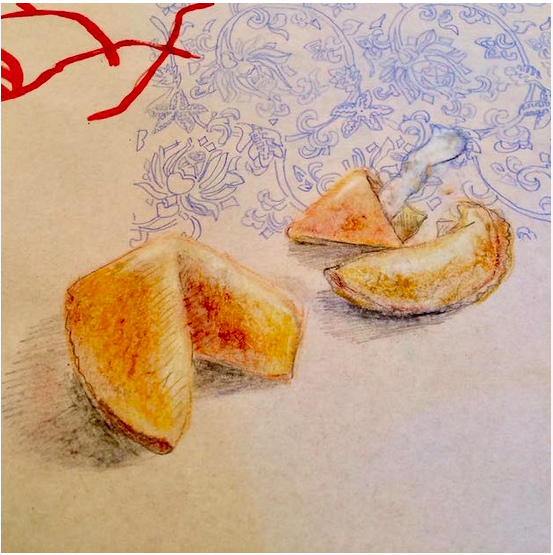 The juxtaposition of private and public presentations of Chinese identity inspired ReOriented—a recent exhibition at the Ross Creek Centre for the Arts (Feb 12-March 29, Canning, NS), featuring a 60-foot rice paper scroll exploring Lee’s own cultural hybridity. The works focus on that hyphen between the words “Chinese” and “Canadian.” “Growing up there was a lot of ‘you’re not really Chinese because you grew up in Halifax, Nova Scotia,’ and ‘you don’t look like a Maritimer’—somebody actually said that to me,” she laughs. “And then I started thinking, what really is ‘real’?—you don’t really know.”

“I’ve actually never had sweet and sour chicken balls. The colour of that sauce kind of freaks me out. It’s really fun to paint though!” — JJ LEE

The truth of her hyphenated reality lies somewhere between the juxtapositions she presents: “I focused mostly on North American food and compared it to the food that we might have at home,” she says. “So for example, I might have a drawing of chop suey and then beside it a whole carp with green onions and soy sauce and things on it. I wanted to contrast the differences.”

Lee, who jokingly calls herself an “equal opportunity appropriator,” has created a deliberate cultural mashup: a sprawling world where toxic-looking red and yellow mounds of sweet and sour chicken balls rest beneath faint brush strokes referencing pagodas, alongside imagery of a railroad and those blue and white Willow patterned dishes (imitations of hand-painted designs from China created by 18th century British ceramic artists for mass production). And a single long golden noodle dips in and out of the frame, twisting through each symbolic incarnation of cultural identity.

Lee’s intent is more a playful vision quest of sorts for an authentic depiction of a hard-to-define hybridized reality, than it is didactic or moralistic. She references writer Jennifer 8. Lee and her book The Fortune Cookie Chronicles, and says she was drawn to the writer’s idea that Chinese food was “a culinary prank” pulled on the West. The author searches for the origins of our favourite Chinese-American restaurant dishes, discovering, for example, that chop suey may have actually been concocted by a Chinese chef in San Francisco whipping up a dish that would “pass as Chinese” for his boss as a practical joke of sorts.

Humour seems to be a potent self-defence weapon for Lee as well, who laughs when recounting dark moments of racism from her childhood in Nova Scotia—where the Chinese community was “really, really really small”—which she spent in Halifax’s Westmount subdivision. “It was good. It was very safe,” she says, pausing, “but there were the incidents.” Her warm smile fades for a minute as she recalls them. “Sometimes I wonder what those people who—like they tried to burn our bushes and they wrote down “chinks” but they spelled it wrong,” she says, her laughter returning. “Like if you’re going to give a racial slur can you at least spell it right!”

The absurdity of labels informs a parallel body of work, Reproductions, on view in Toronto at the gallery, artist supply shop and workroom ARTiculations, where I’ve met Lee for a chat. We stand in front of an installation featuring over 200 label tags from Staples that she’d drawn a number of images on—some faithfully copied from life and some reproductions from photos and internet.

For this piece, Lee drew whatever popped into her head after suffering a concussion, exhuming the labels of her life from her own mind. It’s like looking at the contents of one’s brain splattered on a wall—any internal filing system at work remains a mystery. Western medical imagery dances alongside images of Gumby and Pokey and anatomically-scaled insects and biological diagrams of cells dividing. The end effect? Ordered systems are thrown out of balance, disrupting hierarchies, giving all symbols equal weight.

Some of the labels near the bottom are ripped, the artist’s 10-year-old daughter’s contribution to her work. “One day my daughter, who is on the autism spectrum, was really upset with me and she went to my studio and she ripped up the—she was really quiet and I thought ‘what’s she doing’ and there she was,” says Lee. “Of course I got really upset. No one’s ever destroyed my artwork, much less my daughter, so we had a really good cry about it. Together we decided to piece it back together.”

That her daughter would become an accidental co-creator of this work is fitting, as Lee was considering the labels her daughter would have to contend with in her own life. Her child’s autism diagnosis is recent, so it’s fresh label, the implications of which Lee’s now grappling with.

The tiny drawings cascade to the floor of the gallery, a symbolic gesture that brushes away the constructs that we attach our assumptions upon. Assumptions like: “Chinese people eat sweet and sour chicken balls.”

“I’ve actually never had sweet and sour chicken balls,” says Lee with a smile. “The colour of that sauce kind of freaks me out. It’s really fun to paint though!”