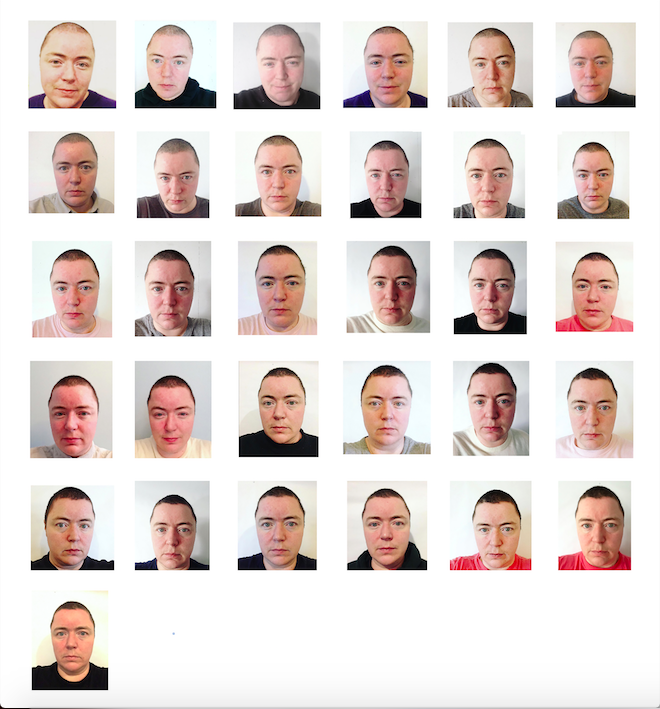 Living and working in K’jiputuk (Halifax), Lou Sheppard uses performance and media installation to explore the rifts between human experience and our attempts to define our place in the world. Sheppard turns data sets, medical texts and geographic information into movements of drawn line, dance and music. Their work tugs and pulls at the structures of language and research in order to play with what is undefinable.

As an artist selected for the Antarctic Biennale, Sheppard mapped melting polar ice and translated the musical scores. A duo of pianists played the composition to one another, the grand curve of their instruments intimately interlinked.

While in Paris, Sheppard began tracing the space in between words in the diagnostic criteria for gender dysphoria in the Diagnostic and Statistical Manual of Mental Disorders. Their project A Strong Desire translates these gaps into a choreography of gestural dance. After being awarded Banff’s second annual Emerging Atlantic Artist Residency and then traveling to exhibit in Antarctica and Venice, Sheppard flew to Paris for a Canada Council
funded residency at Cité Internationale des Arts in Paris. ANNA JOAN TAYLOR caught them for an interview while they were being swept away by this upsurge of travel and creative focus.

“I had this idea that the spaces between words in a text could be read as queer spaces, because they were spaces outside of defined meaning.” —LOU SHEPPARD 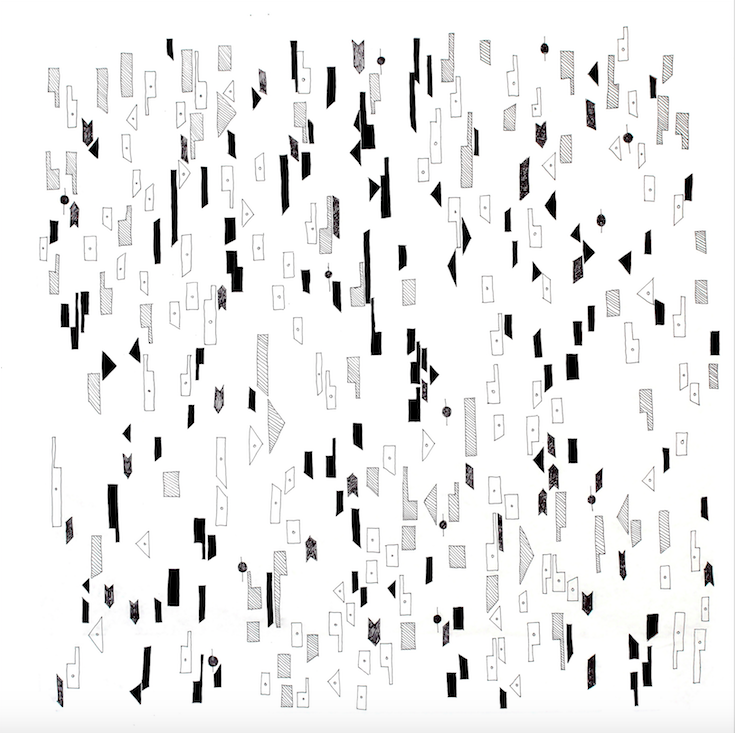 Lou Sheppard, A Strong Desire, 2018. Courtesy of the artist

ANNA JOAN TAYLOR: In A Strong Desire you work with the space around text in an act that speaks to the absence of trans voices in the medicalization of dysphoria. How does the work play with the notion of what is unspoken and undefinable in the diversity of queer bodily experience?

LOU SHEPPARD: I had this idea that the spaces between words in a text could be read as queer spaces, because they were spaces outside of defined meaning. So, with this diagnostic text the words themselves construct a very specific (and very heteronormative) trans body, while the spaces between the words in the text become these flexible, undefined moments—queering the text itself and also suggesting a queered narrative of trans experience. Finding gesture within these spaces (literally by fitting the choreographic notation into the gaps in the text) is a way for me to reclaim and re-embody trans/queer identity, and a way of pointing, through the estrangement of these movements, to the construction of trans bodies through these diagnostic tools.

ANNA: You refer frequently to “lacuna” and the spaces that open up between meaning and definition. What is “lacuna” and how are you exploring it in your work?

LOU: Lacuna is the rift between a translation and source text. Languages, or any kind of notation system, are not interchangeable— each one maps its own (its user’s own) epistemology. So, when a text is translated there is always a gap in meaning between the translation and the original that can’t be accounted for. The lacuna then, is precisely what cannot be said. So lacuna is a space full of undefined meaning. And the only way to apprehend this space is through pointing to it. So much of my work is about this idea of lacuna—gesturing at what can’t be described.

ANNA: Can you tell me about the written, or perhaps more appropriately, drawn choreographic language that you use in your work?

LOU: So, I have been working both with labanotation, which is a choreographic notation system as well as a system of notating any kind of gesture or movement, and a notation system more specific to dance called “Banesh notation.” Both come from Europe—Labanotation or Kinetography Laban was designed by Rudolph Laban, a Slovakian dancer and theorist, and Banesh notation by Joan Banesh and her husband Rudolph—a mathematician and artist—in the UK. I found both of these notation systems through necessity, looking for ways to extract gesture from graphs and shapes. 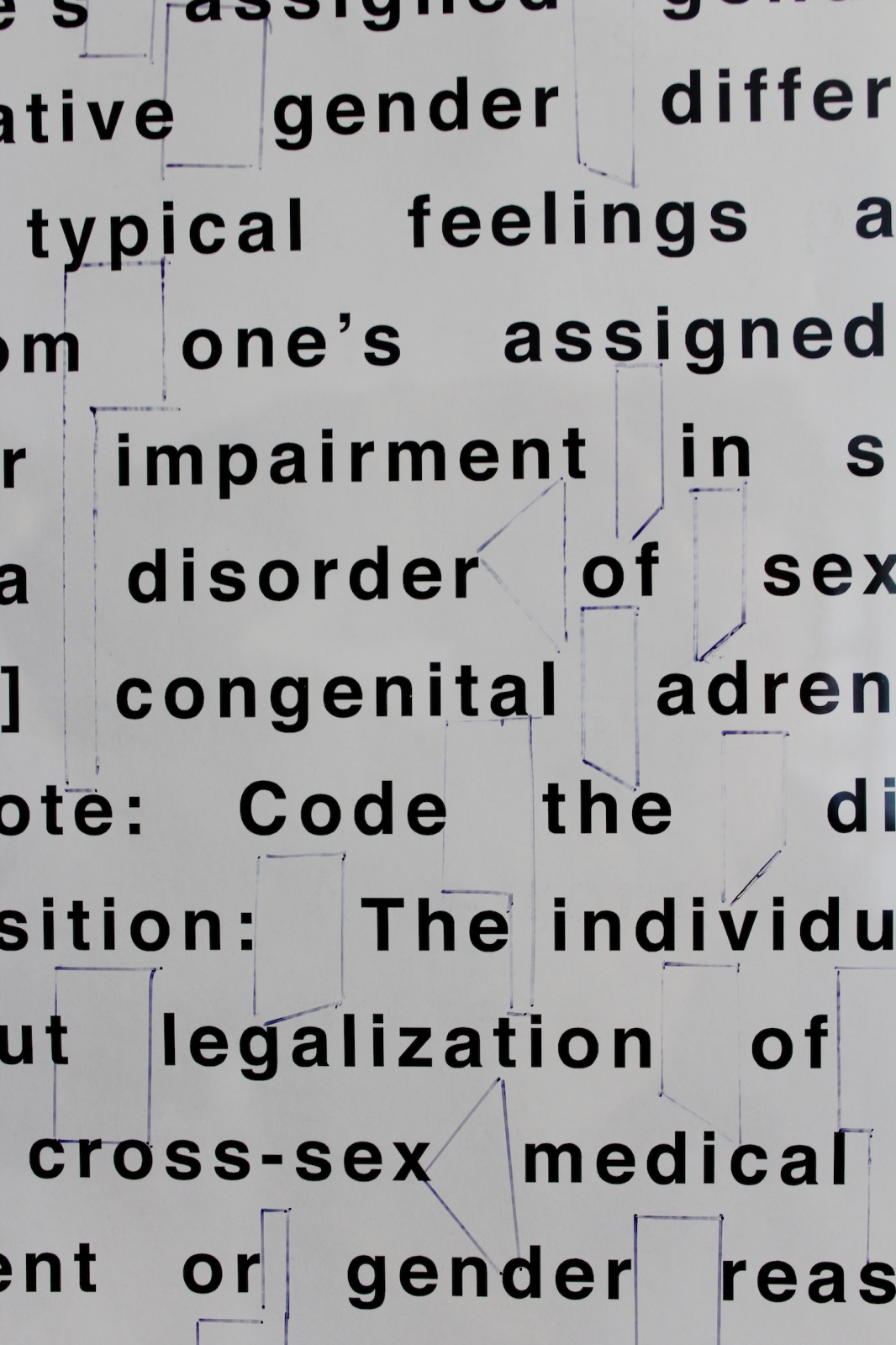 Lou Sheppard, A Strong Desire, 2018. Courtesy of the artist.

ANNA: Part of your work at Cité des Arts in Paris involves practicing through these movements and broadcasting them online. They feel like sketches made with your body exposing the process behind your practice as finished work in itself. How does it feel to perform these for the camera?

LOU: At first this was a function of necessity. I realized that if I were to work with choreographic notations, I needed to understand them in my body so I would dance them, with the idea that I would use these sketches to convey the choreographed sequences. And now I am thinking more and more about how my own body functions with and disrupts expectations about what a performing body, and even just a visible body, should look like. I post this work online also out of necessity—to see it outside of a studio, and also because I have a kind of compulsion to render myself vulnerable.

ANNA: You also mention using this instant and accessible forum of the internet as a way of distancing the work from ideals of finished performance. How does your work untangle other institutional processes—such as scientific processes—which are historically marred in eurocentric, white-male dominated modes of research?

LOU: Totally. Eurocentric, capitalist, patriarchal, colonial etc. etc.—all systems that I am both deeply complicit in and resistant to. Scientific data is presented as truth, but, like any meaning system it constructs knowledge based on a particular set of values and biases, specifically a bias towards that which can be measured or ‘objectively’ observed. By setting up processes of translation that inherently fail to convey the specific meaning of these data sets, and instead produce a series of jarring and abstract musical notes or gestures, I’m pointing to other ways of knowing or apprehending. Of course, I am using meaning systems that are encoded with their own values and biases, and often originating from these same dominant culture(s), like musical staff notation or choreographic notation, and—more recently and explicitly—Sacred Harp notation and notation used for Gregorian chanting. So maybe not untangling so much as tangling more?

Anna Joan Taylor is a queer artist, writer and activist from K’jipuktuk (Halifax), Nova Scotia who holds a BFA from NSCAD. Her work combines craft, sex education and performance into an interdisciplinary art practice exploring sexuality within the confines of culture, commodity and law.