Mocean Dance animates its past in lightening speed 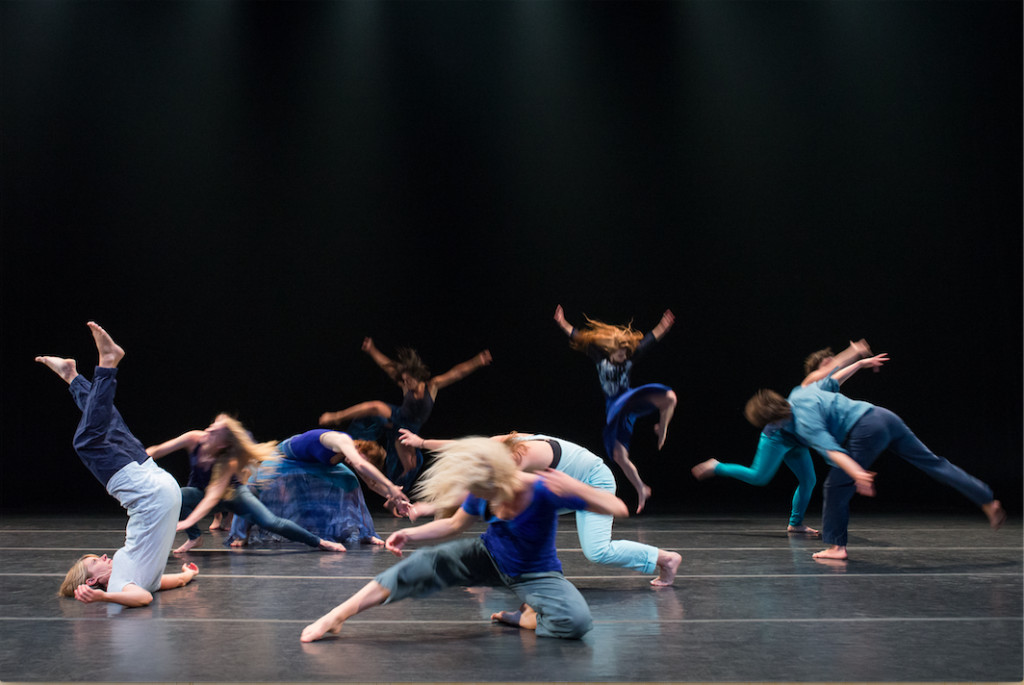 Tenacity was nothing new to the dancers performing Mocean Dance’s anniversary piece, 15 for 15. Arms clasped behind backs and bathed in white light, their efforts were palpable as they attempted the gruelling task of moving forward on legs spread unreasonably wide. At fifteen years, Mocean is one of the longest surviving contemporary dance companies in Atlantic Canada and well-known for its highly physical and collaborative work — so much so that the dance company recently won the 2016 Lieutenant Governor of Nova Scotia Masterworks Arts Award for Canvas 5 x 5, marking the first time in its 11-year history that the prize has gone to a dance work. To celebrate their fifteen-year milestone, the company asked fifteen choreographers, either based in Halifax or with strong Nova Scotian ties, to create one-minute works set on eighteen dancers. Mocean presented the resulting piece, 15 for 15, at the James Dunn Theatre in Halifax this fall to an audience made up of long-time arts supporters, dance enthusiasts, and young dance students.

Stitching together light, darkness and a Nova Scotia-inspired soundscape

Sound designer Brian Riley’s soundscape provided a through line for what might otherwise have been fifteen disparate vignettes. Riley was given full freedom to create a cohesive sonic world. Amongst found, manipulated and created sounds, Riley’s source material featured rich Nova Scotia content—sounds from sculptor John Little’s ironwork studio, Kira Daube and Jacques Mindreau’s haunting layered vocals. In a nod to his history with the Mocean, Riley integrated segments of composition created for past collaborations along with music conceived and recorded on the spot while watching 15 for 15’s lightning fast rehearsals. In a few cases, dancers provided their own snippets of sound which Riley “sewed into the quilt by adding a little tops and tails.” Riley’s score was augmented by moments of silence that allowed the sound of moving dancers to take central stage. For instance, Nova Scotia born, New York-based choreographer, Rebecca Lazier’s gorgeously controlled maelstrom of bodies and limbs falling and rising sounded like a fisherman’s catch. One could imagine the flashing silver tails of trout flapping in a net.

Bringing together so many professionals from the dance community was an impressive undertaking and offered a snapshot of the current state of contemporary dance in Nova Scotia.  The fifteen choreographies comprising 15 for 15 were stitched together under the creative leadership of Mocean’s co-artistic director Sara Coffin, with Riley and choreographer Corey Bowles. Lazier stepped in as rehearsal director and a pair of outside eyes. Benoit Gavel’s strong lighting choices and unabashed use of darkness added a depth and sophistication to the work. The cast featured the bulk of professional dancers in the province, including Mocean’s founders, current company members, and a new generation of rising talent.

Video: For a Quartet (2016), by Daniele Desnoyers, Mocean Dance

Animating themes of time and transition

Nods to themes of time and transition echoed throughout the work. 15 for 15’s first segment ended with the youngest dancer and the oldest dancer, standing spotlit on an otherwise blackened stage, the thirty year gap between them apparent. Sharon Moore’s, funny and irreverent take saw a throng of dancers dragging co-Artistic Director Susanne Chui around in a delightful circle of frenzy. “Tiiiime, tiiiiime, not enough time,” Chui dramatically moaned. Time was scarce in the work’s production. Choreographers each had a single hour to create and rehearse with the dancers. The dancers, juggling second jobs and family demands, periodically resorted to learning movement phrases via a dedicated YouTube channel when unable to attend rehearsal. At one point, a dancer was breastfeeding her infant mid-rehearsal.

The condensed rehearsals did result in a mixed performance—While 15 for 15 was fresh and energetic, there were also small glitches and moments lacking in synchronicity.  At times the choreographers’ voices were difficult to recognize amidst transitions and a cameo by the company’s long-time technical director was heartfull though mawkish. Ultimately though, the work was deeply pleasurable to watch, as seeing fifteen plus dancers on-stage is a rare treat in Atlantic Canada.

For choreographer Jacinte Armstrong, the short minute of time she was allotted doubled as a metaphor for the struggle, friction, and beauty that comes with creating dance in a small community. Armstrong teased out an undulating amorphous cluster of dancers that dragged out into a linked diagonal line of interlocking arms.  For Armstrong, the most powerful part of 15 for 15 lay in connecting with moments from  “everyone’s past, present and future in the one-minute that they [choreographed]. That was the greatest part.” Sara Coffin, befitting her collaborative practice and role as a mentor, took advantage of her minute by creating three moving wheels with fifteen of the dancers. Coffin taught the group a fairly simple form, but one that required counter weight, intricate bodily communication, and at least five bodies working together to create each of the wheels. 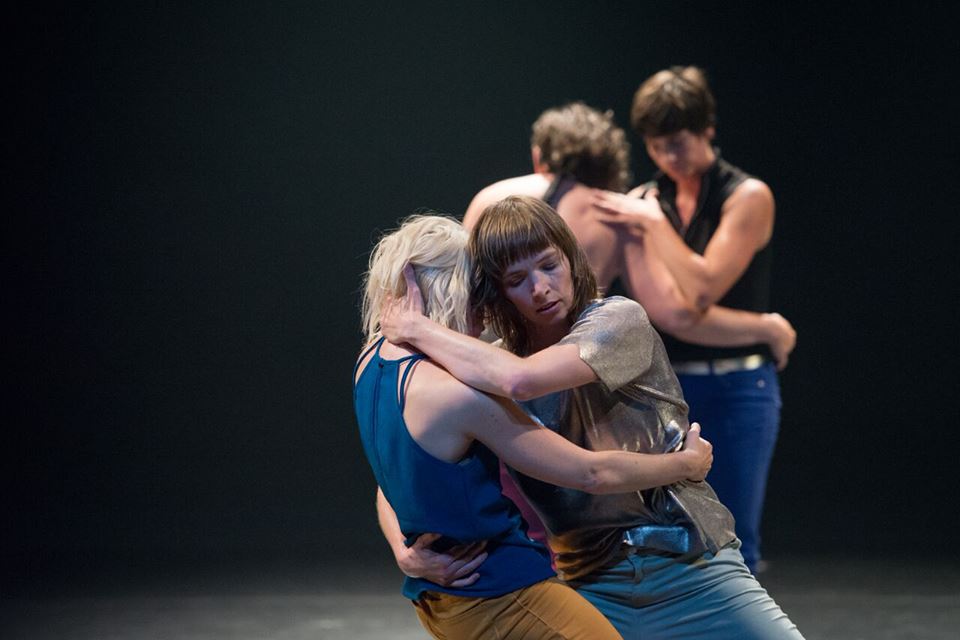 Veronique Mackenzie’s one-minute reflected a multidisciplinary art practice. Dancers crumpled, twisted, and smoothed paper over the sounds of an appropriated 1992 Mister Roger’s Neighbourhood segment: the episode where Mr McFeely describes how coloured construction paper is made. The witty combination of subversive paper manipulation with instructional voiceover was a refreshing contrast to the more traditional “dancerly” approaches to choreography.  Recently out of a training with the Creative Music Workshop, Kathleen Doherty’s task-based score took a decidedly different tack, using silence and stillness to highlight individual choices made by each dancer as they followed simple directions: “walk downstage; stop; walk downstage.” Among the least experienced of the group, participating as a choreographer allowed Doherty “to step forward and say what was important to me.”

Even with such an inclusive project, there were some notable absences in 15 for 15 whether due to scheduling conflicts or other reasons. There was also a lack of male bodies or bodies of colour in the cast. According to Mackenzie, with the exception of Corey Bowles, “there just aren’t any professional male dancers [in the region].” This is a concern when we consider that this means a void of dance role models for young people in Atlantic Canada who are not white and female. When asked about the greatest impact of 15 for 15, Doherty recalls the young dance students crying during opening night reception following the performance. “Big feels” were Coffin’s words. These girls were responding to seeing three generations of Atlantic dancers and dance teachers on stage, and realizing that it could be any of them up on stage one day.