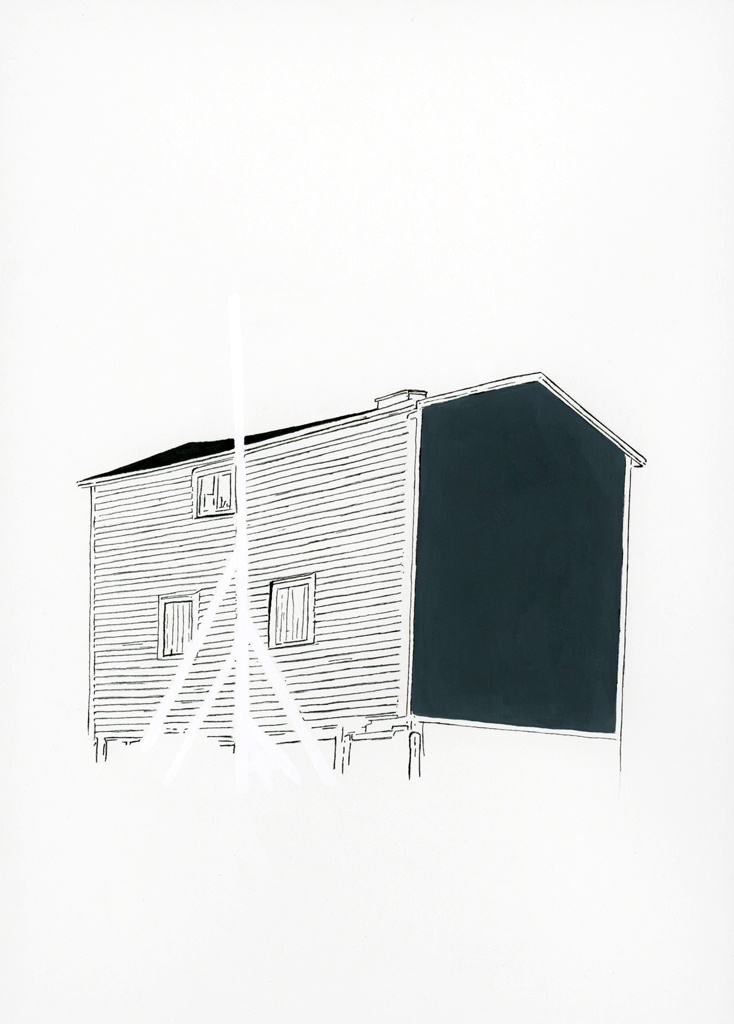 A maker of stories and collector curious things, Jerry Ropson strings together tiny histories that explore the ties between people, place and identity. Ropson, who grew up in rural Newfoundland and is now based in Sackville, New Brunswick, organizes chance encounters and reanimates the forgotten fragments of our lives, those left behind on dusty sidewalks, by collecting discarded or lost objects. His chronicling of the commonplace through layers of random detail, narrative, drawing, text, sculpture and performance can send one into a purposeful tumble of confusion. But in those in-between moments of creation one can feel in Ropson’s work also lies a newly found admiration for the common and everyday.

KAYLEE MADDISON: What is it about the ties between narrative, myth, people and place that fascinate you?

JERRY ROPSON: I am continually heartened by how a good story is never told the same way twice. I like how setting and audience can change the way a story is told. I like how common myths tend to shape a place and the people that can form that place. For me this is tied to my rural origin, but of course it’s not necessarily exclusive to that place. It is common to all myths, people, and places. I am intrigued by how culture can be performed, and how the perpetuation of certain myths are what make a community what it is. And likewise, how those same particular myths can structure and inform the way we relate to any place we come to inhabit. 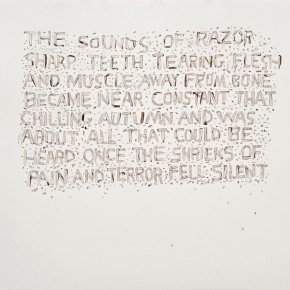 KM: Are there any myths in particular that you’re interested in re/deconstructing about people and place in Atlantic Canada?

JR: I am perhaps most obviously interested in the stories, myths, and traditions of rural Newfoundland. I am continually amazed at how intricate and disparate these can be from one tiny cove to the next. Specifically I appreciate how language is so specific to these places, and how the interrelations of words and objects might take on different meanings. I like deciphering common and contrasting readings of these. I am interested in oral traditions, myths that are tied to the home, the domestic, or myths that have been somewhat estranged through a gendered history.

I think that stories and myths of the sea, of the fishery and interactions with the harsh environment are pretty commonplace. I am compelled to seek out more clandestine myths, near forgotten traditions or unspoken commonalities. Drawn to things that are at first glance perhaps a little dark, having a hit of the sinister or the ominous, I like myths or stories that are obscure, bleak or even tragic, but also have an element of being completely mundane and unembellished. This is linked to my interest in everyday objects that move beyond myth— common forms that convey meanings that are specific to place. The way that these objects communicate to a collective community; the way that some domestic objects that have been coded with meaning through myth or ritual, is fascinating. I also like strange superstitions.

KM: Your work often seeks to unsettle our notions of value—Can you tell me a little about your process in deciding which miscellaneous objects that you find and collect to include in an exhibition, and which may be taken out of the gallery by viewers?

JR: Relating to my interest in narrative, I am concerned with the ways culture is shaped through being commercialized, commodified and disseminated. I collect simple objects, ephemera and words formed of everyday materials and interactions. Again, through this desire for commonality, I both collect, incorporate, and create objects that might suggest some evidence of process, activity or exchange. In more recent years, this has been demonstrated through artist multiples, zines, posters, postcards, stickers, souvenirs and even performance.

I offer tokens of exchange, or sometimes, just gifts. I am attracted to items that have been lost or intentionally discarded. I attempt to reinvest castoffs or the unwanted with some element of significance or value. I work with forms that might commonly be over looked, but through infusing them with time, material and labour, I make the most common things valuable. Inverse to that, I aim to offer things that have an implied worth—common, accessible and free.

Whenever possible I like to offer items up to the public, for example I’ve implemented exhibitions where all of the drawings are to be taken away without charge; community-based projects where I’ve distributed handmade customized bumper stickers to anybody who wants one; or left stylized necklaces made of bits of beach trash as offerings to tourists looking for that perfect something to memorialize their trip to “the magical island” in the sea they’ve traveled so far to see.

KM: You’ve travelled nationally and internationally, working in both rural and urban settings—How has each influenced your approach to art making?

JR: I guess that’s true. No matter where I go though, I think I’ll always just be a guy from a small town. I tried to elude that for a long time, but I’ve come to embrace it in more recent years. I am still so easily impressed by large cities, and am readily in awe of urban areas. That said, I seek out or perhaps even try to form tiny communities wherever I end up. Again, it’s like a commitment or even a yearning for a rural way of relating to place. That doesn’t necessarily mean the clichés of being overly friendly, or naïve; it’s more about seeking out the familiar within the new or determining some sense of immediacy. This has allowed me to further challenge ideas of value and accessibility; inverting mediums … the idea of currency, or even cultural literacy, is something that I often think about. This particular sense of place that I adhere to has come to direct how I respond to each and every site I find myself in. Especially within galleries or typical exhibition spaces, it’s a part of why I continue to seek out unconventional spaces, chances to operate somewhat on the fringes, or within the unexpected. 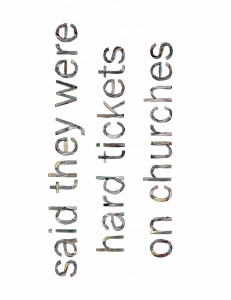 KM: Your work at times explores the notion of creating a sense of place—What does this mean to you in an age when many are leading transient lifestyles?

JR: A sense of place has more to do with being able to relate or connect to your surroundings in some way, than some notion of “belonging” or being rooted to place. I spend a lot of time thinking about systems of knowledge, ways of knowing, and the potential of exchange and commonality. Everyone comes from somewhere, but for many it’s not as important. I happen to be obsessed with this place where I started, but it doesn’t mean that that’s the deal or what I’m trying to suggest for others. The idea that wherever we go, that wherever we end up can be equally significant and informative is also very interesting. I left home at 17 to go to art school, and I still return to that small town several times a year. I spend most of the last 20 years being pretty transient, constantly looking back, but in recent years, since coming to Sackville, I feel pretty settled. Some of that is certainly circumstance and proximity, but in any case I no longer feel that need to keep moving in such the same way.

I’d like to think that my work offers a chance for pause, that the stories and bits and pieces that I offer may give way for tiny moments of reflection and certainly some sense of some place. Is that a proper answer?

KM: Can you tell us a little bit about the inspiration and thought process behind the piece you’ve created for Visual Arts News?

JR: Building off of the idea of treating the magazine as a “site specific” exhibition space of sorts, for Visual Arts News I’ve created two distinct pieces. My intention is that these works be integrated within the magazine as single full pages, with each taking on a different role. I think they fit with the ideas of community, exchange and value that I seek through my work.

This first work is entitled Notes From The Camp, simply made with ink and graphite on paper, is visually similar to other “listing” type works that I’ve made in the past, but was made specifically for Visual Arts News and relates to the theme of “community” and “place.” Its title being an obvious reference, the content relate more to a series of research I’ve been conducting over the last couple of years in rural Newfoundland. It will have multiple readings and references depending upon where you are and where you’re from.

The second work, which also ties in with this theme, is “self-titled” and originally of ink and watercolour on paper. I want this image to disrupt the flow and viewing/reading of the magazine, and is oriented as such. The intention is that the work will act a kind of takeaway or artist multiple, which the reader is encouraged to rip/cut/tear from the magazine and disseminate as they like.

I should add that neither of these works would be possible without the beautifully generous people of Fogo Island, Newfoundland and more specifically those of Barr’d Islands, Joe Batt’s Arm, and Tilting. I spent most of last summer with many community members; sitting in their homes, over cups tea- sharing countless stories and near endless slices of homemade pie. Lassy Tarts for life!

*A version of this conversation and work Ropson created for Visual Arts News is featured in print in the Fall 2014 issue.