The marks left behind

Denise Hawrysio on pushing the boundaries of print

For more than 20 years, Denise Hawrysio has continuously pushed the boundaries of printmaking, shifting traditional printmaking techniques into the realm of contemporary art while reflecting modern realities. Hawrysio removes the walls between her studio and the outside world by taking her etching plates into everyday public spaces, where she finds unique and unexpected ways of mark-making. The resulting prints tell stories of social interactions and her explorations of different situations.

Hawrysio, a Toronto born artist currently living in London, England, will be part of the Summer Visiting Artist Series this July at the Anna Leonowens Gallery, presenting her exhibition I am @ here Alive from July 15-26.

“We encourage the use of the gallery to become a sort of lab for the artists with the potential to show new work, try new installation strategies, experiment and get feedback from our community,” says gallery director Eleanor King. “I’m personally excited about Denise’s work because of how she adeptly moves through media—she engages with material in a way that I really admire.”

In this online exclusive interview for Visual Arts News, our writer Kaylee Maddison catches up with Hawrysio about her upcoming trip to Halifax and her artistic practice. 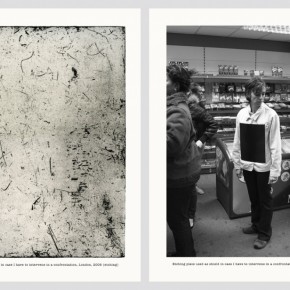 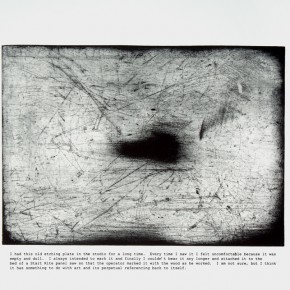 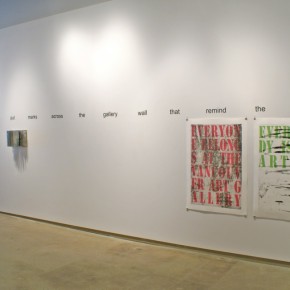 KAYLEE MADDISON: You’ve had many exhibitions and residencies all over Canada, but never the East Coast until now. Why did you decide to come to Halifax for this residency?

DENISE HAWRYSIO: I’m surprised it’s taken until this point in my life to get to the Maritimes, and I’m really looking forward to it! NSCAD has long fascinated me as a magnet for interesting things in the art world, so that’s a major draw for me, but I’m also excited about seeing new landscapes and old friends.

KM: Many art schools and universities throughout North America have closed or are contemplating closure of their printmaking departments. How do you hope your work may influence printmaking education and practice?

DH: I find that interesting because some schools in London, particularly the Royal College of Art, have made big investments in their printmaking departments. My own approach is interdisciplinary and conceptual, both of which are not generally associated with printmaking, but seem to be on the rise within the discipline. My pedagogical approach involves imparting my own belief that, despite its marginalisation over recent decades, print can occupy a important position in contemporary art. We need to extend the theoretical discourse around print media, develop its bespoke processes in conjunction with more ‘industrial’ methods of reproduction, work with new web and digital technology and—perhaps most importantly—push the conceptual borders of ‘the print.’

I do see some encouraging signs of a global shift within printmaking as it expands and reinvents itself conceptually and technologically, pushing the area into new, post-modern terrain. The medium’s new identity can be seen in print blogs such as Printfreak, Printeresting, Magical Secrets and Outlaw Prints and Printmakers; in the development of new publications and websites; in the innovative ways print is being explored by artists like Christiane Baumgartner, Tal R, the Chapman Brothers, Xu Bing, Kiki Smith and Julie Mehretu, and at the grassroots level by groups like Drive By Press, Evil Prints, Bikini Press International and The Print Circus.

KM: What do you hope to achieve and get out of your time in Halifax and the residency?

DH: I’ve been working on ideas for a new print installation in my studio in London, and I will continue that process during the residency. I’m interested in questions of control, improvisation and the indeterminate play of meaning that arises through the process of making. This new project will involve a direct and intimate relationship with materials; the procedures of formal decision-making will be tempered with the spontaneity of site-specific mark-making.

KM: I understand the idea of impression or mark-making in your work embodies more than a technical process?

DH: My intention to continue with imagery saturated in ‘imprint’ (the direct impression of objects or gestures) and ‘touch’ (the direct intervention of the artist) is strengthened by my engagement with critical conceptualism, both as an aesthetic attitude and as a political stance. For me, technique is primarily a means to an end.

KM: What first inspired you to use print as a method of social engagement?

DH: Since my undergraduate days, I have tried to work with print in innovative ways, both materially and in terms of a kind of social engagement developed from the tradition of process art. At Queen’s University, Nick Wade [Hawrysio’s tutor] introduced me to conceptual and social art practice: we took a trip to New York to see the Beuys retrospective at the Guggenheim, and his blackboard drawings were hugely influential for me in relation to my printmaking practice. I was also inspired by Beuys’ ideas about art as an ongoing, open-ended process that can be “materialized equally in words, things, images or actions.”

Other influences were Serialism in music and the visual arts as a way of challenging and expanding traditional notions of composition and control. Sol LeWitt was another early influence—his ideas of machine-made art and the way that “process interested him as much as thinking.”

KM: Where do you find inspiration for the non-art situations in your work and the “construction of events?”

DH: I have a longstanding interest in structural film, in which duration is a critical element. As AL Rees puts it in A History of Experimental Film and Video, “duration reveals perception as an act of becoming rather than as the presentation of what has already become.” I use the etching/print plate like the frame of the camera, but instead of a continuous measuring of light, the plate becomes a method of measuring time and its exposure to movement is revealed through the marks left behind. Mark-making happens all around us, an inescapable part of life.