A wolf in sheep’s clothing 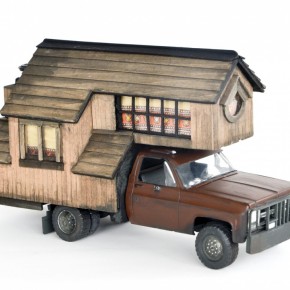 Halifax-based artist Chris Foster’s Frontiers in Real Estate explores contradictory themes of civilization—its fear stories, misguided good intentions and self-indulgent sincerities. Foster’s dark humour is never moral, at least not overtly. Composed of serigraphs, collage and small sculpture, his work considers the history of consumption, both visual and commercial, with a tongue-in-cheek objectivity. “I’m interested in engaging a broad audience, despite their politics,” explains Foster during our phone conversation. “My work is a wolf in sheep’s clothing. At first it is very accessible, but underneath it is very critical of culture. People don’t like to be jabbed in the eyes right away; everything needs to be veiled.”

Three works begin the series of serigraphs, depicting communities of wooden structures. There are no figures, and therefore the emphasis is on the buildings and their allusion to human resourcefulness. Can Do (2011) is reminiscent of the illustrations of the sites of early European explorers, such as Samuel de Champlain’s Habitation at Port Royal (1604). In Stay Free (2011), a vehicle is dismantled and incorporated into the construction. A black flag flies; the place has no allegiances. In Abandon Ship (2012), Foster has depicted a Noah’s ark-type structure surrounded by burnt forest, flying an upside-down Canadian flag. Later serigraphs include Com Tower (2012), Com Tower #2 (2012) and Com Tower #3 (2012), in which communication towers have been transformed into high rise wooden houses. These are hermit dwellings with a million dollar view.

A second body of work is composed of small models of wooden homes built on the backs of motor vehicles, with names like 1977 GMC ‘Wrecker’; 1977 Chevy Van; 2 n’1 JEEP CJ-7; and Suzuki ST30 ‘Post Car.’ Foster was inspired by the 1979 publication Rolling Homes, which surveys mobile homes converted from pickup trucks, school buses and big rigs. These individually crafted houses on wheels combined the spirit of the old-timey covered wagon and the mobility of contemporary motor vehicles, forming an original artistic and cultural movement based in a do-it-yourself tradition that continues today.

History is punctuated with waves of escapism, particularly in response to major socio-economic shifts. The Industrial Revolution brought mass tourism, as the newly formed middle class left the city for excursions in the countryside. Modern mobile culture came to fore with the Great Depression, and continues to be a preferred method of escape for various subcultures. It seems to reappear with every generation, arriving in response to the horrors of war, of mass crass commercialism and fears about pollution. Now, when the decline of the Western empire seems really quite tangible, it only makes sense that some should wish to pick up and drop out. Foster agrees, with a caveat: “There’s something about e time that we’re living in, with its economic pressures, that makes escape seem really romantic.” The idea of retreating into the natural world is seductive for Canadians still, “despite the fact that we’re poisoning nature and have an increasingly abstract notion of nature. It’s all rooted in fantasy.”

The third series features black and white collages, cut from the pages of a publication by Foster titled New Civilizations. Using a mixture of photos taken largely from National Geographic magazines, Foster combines old and new imagery to create improbable landscapes. Ancient civilizations and modern towers are unabashedly paired, as are piles of tires and decaying towers. One image shows a cathedral mostly buried in the sea, as two amused but relaxed individuals stand on the beach to admire it. Kate Walchuk aptly describes the tone of this series in her intro for New Civilizations: “Relics from these dead civilizations are contemplated with mere sentimentality; they function as kitsch destinations for world travelers and history buffs.

Each collage only becomes strange after a good hard look; it is often difficult to see evidence of scissors. But the cutting and pasting is there and speaks to Foster’s honesty of process and material. The decision could also be considered a nod to 19th century composite tourist imagery, prevalent in Europe and North America— photographers and postcard producers, confined by available technology, would often cut and paste objects into scenes. Their emphasis was not on being factual, but to formulate an arguably “true” representation of a visitor’s experience. Foster’s collages have the same intentions; verity is not important here, but rather the slow shock of juxtaposition that we encounter when viewing the image, and with that, a message that rings true.

Much like the tourist imagery to which he alludes, Foster has made his work readily available for purchase by the public, and has constructed each piece so that it can be efficiently transported home. “Maybe if this was a different time, I’d be working in large sculpture or paintings, but living and working as an artist in Canada is not viable in that way. Paper-based work and small sculpture are part of a creative process that I can ship. It can seek out audiences in different places.” The exhibition will continue to Fredericton, New Brunswick, and Dawson City, Yukon. It will develop and change for each venue.

As dystopic as Foster’s message may be, it comes with a wink. His “frontier” is a concept, a psychological state of change and possibility. For him, it is in small gestures of rebellion that change can be effected.

Mireille Eagan is a curator and art historian based in St. John’s.